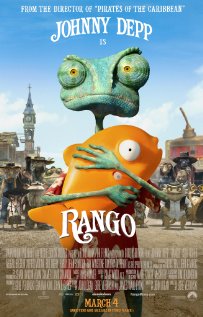 My View:  Rango (2011) :  Think of this film as an animated, adult, western with comedy thrown in.  While I liked the look of this film – it had a nice use of very bright and vivid colors - I didn’t like the storyline.  A chameleon (voiced by Johnny Deep), out on his own for the first time in his life, encounters a wild-west town that needs a new sheriff.   The chameleon takes the name of Rango and deals with the problems of the town mostly with wit and bluster.  The film is much too adult and way too long (107 min) for young children; and with the amount of talking and bouncing around that the 7 year-old sitting in front of me did, I think she would agree.
My Rating:  Cable  Rango website

The 50 (a movie from my best/worst films of all time):
#47 Best Film:
The Thin Man (1934)  A murder mystery with a bit of comedy, this film is the story of Nick and Nora Charles, a well-to-do married couple with a dog named Asta, who get bored, and decide to solve a missing persons case.  This is one of my favorite films, with William Powell playing the wise-cracking former detective and Myrna Loy playing his wealthy wife who tries to keep up with her hard-drinking husband.  The chemistry of the two leads and their characters’ love for each other makes it an enjoyable film to watch.  The dog almost became as big of a star as Powell and Loy.  The Thin Man Info

Forgotten Film:  Restoration (1995)  This film, set in 17th century , shows the rise and fall of a young physician (played by Robert Downey, Jr.).  The young physician becomes the personal doctor of the King (played by Sam Neill) in the time of the Black Plague.  The physician’s downfall, however, develops when he falls for the wrong woman, but he eventually finds redemption in discovering his true calling in life. This film has a great look with its sets portraying contrasting worlds of the royal world to the grim world of lowly subjects.  gives one of the better performances of his career.  Restoration Info

In Case You Missed It (A Film Just Released on DVD):  Black Swan (2010):  A ballet dancer (played by Natalie Portman in her Best Actress Academy Award winning role) wins the lead for “Swan Lake” but starts losing her grip on reality when the pressure and competition start wearing on her.  This psychological thriller, with a little horror thrown in, works well because of the performances of Portman and, surprisingly, Mila Kunis (from That 70’s Show), who received a  Best Supporting Oscar nomination.   My Rating:  Full Price  Black Swan Info
Weird Credits:   From the credits of Rango:  Sound Technician for Mr. Depp
Coming Soon to a Theatre Near You:  Source Code   Jake Gyllenhaal plays a soldier who discovers that he is part of a mission to find the bomber of a  commuter train. This Sci-Fi action film is getting good buzz and is being compared to 12 Monkeys.  Source Code website