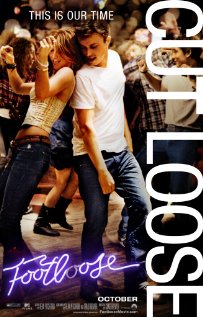 My View:  Footloose (2011)  A remake of the 1984 film.  Newcomer, Kenny Wormald, stars as a kid from  who recently lost his mother to leukemia and goes to live with relatives in   He soon discovers that this is no ordinary town.  Bomont banned dancing and loud music three years ago after the tragic deaths of 5 teenagers on their way home from a party.  Wormald encounters the preacher’s daughter, Dancing with the Stars Julianne Hough, whose father is the town’s preacher/councilman, played by Dennis Quaid.  Hough struggles with her acting and makes every scene she is in almost painful to watch.  Miles Teller is fun as the goofy best friend who can't dance, but he doesn't match what Chris Penn delivered in the original.  The surprising thing about this film is it updates the 1984 film, but it keeps several of the songs from the original film, including the title song.  Much of the soundtrack, though, has a strange country twang to it.  The big difference between the original film and this one is while Wormald is a great dancer, he lacks the charisma and star power of Kevin Bacon, the original’s star.  Bacon was able to change the town's mind about the anti-dancing law because he could inspire people to do greater things.  Wormald can only inspire people to do better dance moves.   My Rating:  Bargain Matinee   Footloose Website

Indyfest (A Look at a Small, Indie or Foreign Film):  Tucker and Dale vs. Evil  (2011):  Tucker and Dale are best friends who are headed to their new vacation cabin (a fixer upper), but there is something you need to know about them:  they are hillbilly rednecks.  A bunch of preppy college kids are headed to the same section of the woods near an isolated lake.  There is one thing that they all find out once they get to their camps…twenty years ago five college students mysteriously disappeared there.  The two groups encounter each other, and the college kids start dying.  The difference between this and other slasher films is this is a comedy, and the deaths are all accidental.   This is a funny film that uses all of the horror stereotypes to play for laughs.  Tyler Labine, who plays Dale (from TV programs Reaper and Mad Love), and  Alan Tudyk (Transformers:  Dark of the Moon), who plays Tucker, are brilliant as the dim-witted  hillbillies who don't quite get why anyone could be afraid of them.  If you are a fan of films like Shaun of the Dead and Attack the Block, you should see this very enjoyable movie.  My Rating:  Full Price   Tucker and Dale vs. Evil Website

The 50 (a Movie From My Best/Worst Films of All Time)
#32 Worst Film
The Master of Disguise (2002)  Dana Carvey stars in what is considered one of the worst comedies of the decade and may be one of the worst comedies of all time.  Carvey plays Pistachio, an Italian waiter, who has inherited the uncanny ability to disguise himself.  He sets out to stop a criminal mastermind in an attempt to clear his family’s good name.  Carvey is painfully unfunny, and it's unclear if this film is aimed at kids or adults because one minute Carvey is a man who looks like a human turtle, and the next minute he is Tony from Scarface.  The jokes are not at all funny, the disguises are amateurish, and the whole painful experience feels like a bad movie made in 1982 not 2002.  It's rumored that this film ran out of funding during production, but it's too bad it didn't run out of money before it was made.  That could have saved us a lot of pain.   The Master of Disguise Info

Forgotten Film:  Buck and the Preacher  (1972)  Sidney Poitier (In the Heat of the Night) directed and starred in this unique Western film.   Poitier plays Buck, a trail boss who is leading a wagon-train full of former slaves on their way to the West.  During their journey, the travelers encounter The Preacher, played by Harry Belafonte (Uptown Saturday Night), a shady minister who Buck has to enlist to take the group to their destination.  The travelers also have to overcome a group of bandits who have the intent of stopping the wagon train.  This is an amazing film full of humor and remarkable performances, with Poitier showing his superb directing touch.   My  Rating:  Full Price   Buck and the Preacher website

In Case You Missed It (A Film Just Released on DVD):  Green Lantern   (2011)  While I liked Ryan Reynolds as the Lantern, he couldn't rise above a plot that looks like it was written in crayon, special effects that appear to be no better than a Power Rangers TV show, and one of the most anti-climactic battle sequences I have ever seen toward resolution in a film.  My Rating:  You Would Have to Pay Me to See It Again   Green Lantern Website

In Memory of Ed Wood (A Movie I've Only Seen in Trailers but Just Looks Like a Bad Idea):  New Year's Eve (2011)  Another one of those holiday films that brings together as many stars as possible so you can forget how bad the plot really is.  Oh, and two of the "stars" of this film are Sarah Jessica Parker and Jessica Biel, both who have had quite a few bombs in recent releases.   New Years Eve Website


Weird Credits:  From the credits of Footloose:  The Producers wish to thank the Meteorology Department of WXIA-TV.


Coming Soon to a Theatre Near You:  Extremely Loud & Incredibly Close  This highly anticipated film has an all- star cast headlined by Tom Hanks and Sandra Bullock.  Directed by Stephen Daldry (The Reader, Billy Elliot), this film is the story of a nine year-old boy who searches the streets of New York City for the lock that matches the key left by his father who died in the 9/11 attacks.   Extremely Loud & Incredibly Close