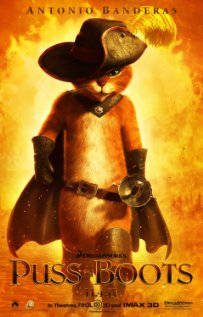 My View:  Puss in Boots  (2011)  This Shrek-series spin-off tells the origin of the swashbuckling cat, Puss in Boots.  Antonio Banderas returns as the voice of Puss, a cat who, at an early age, dreamed of fame and glory.  Along the way, we meet his best friend, Humpty Dumpty (voiced by Zach Galifianakis) and a fellow pick-pocketing cat named, Kitty Softpaws (voiced by Salma Hayek).  Puss and his gang decide to find the legendary magic beans (as in Jack and the Beanstalk) in hopes of getting rich from the Golden Goose.  Their plans, however, go bad when Puss is betrayed by one of his own.  This animated film was made in 3-D, but the film is so dark in appearance, the 3-D effects aren’t always noticed.  The story is long and complicated with a lot of flashbacks - something I think kids will find difficult.  There is very little humor in this film (the first Shrek film had loads of humor), and I quickly tired of the banter/stick of Puss.  I think Puss is just not a strong enough character to lead a picture.  He should have stayed in the shadow of the big green ogre.  My Rating:  Cable   Puss in Boots Website

Indyfest (A Look at a Small, Indie or Foreign Film): Martha Marcy May Marlene  (2011) Elizabeth Olsen (yes, she is the sister of Mary-Kate and Ashley) stars in the title role, a women who suddenly shows up on her sister's doorstep after she was missing for two years.  The reunion, though, is difficult and forced as Martha is hiding secrets, and her deception starts tearing apart the sisters.  We discover, in flashbacks, that Martha lived in a cult led by a charismatic man (played by the very creepy John Hawkes).   This is a dark film, and you won’t always be able to decipher reality and what is just happening in Martha's mind.  Olsen is amazing.  Her appearance changes when she exhibits a remarkable range of emotions as the film progresses and she gets pulled deeper and deeper into the cult.   Hawkes is perfect as the cult leader who never uses physical violence to meld his members.  His control is all accomplished with a calm, quiet demeanor that is far scarier.  Olsen is almost certain to get an Oscar nomination in this interesting study of a cult mind.  My Rating:  I Would Pay to See it Again   Martha Marcy May Marlene Website

The 50 (A Movie From My Best/Worst Films of All Time):
#31 Worst Film
Staying Alive (1983)  Rocky meets Saturday Night Fever, as Sylvester Stallone directs John Travolta who reprises his role as Tony Manero.   It's five years later, and Tony is no longer dancing on a disco floor…he’s now auditioning on the Broadway stage.  Tony seems to have left behind his Brooklyn-old ways as he now has a steady girlfriend and has toned down the boozing lifestyle.  The old Tony, though, surfaces when he dumps his girlfriend (played by Cynthia Rhodes) to sleep with the play’s lead dancer (Finola Hughes), in an attempt to get a bigger part.  Stallone's handprint is all over the script (he co-wrote it), and the dialogue is so heavy-handed, I was waiting for Tony to say, "yo," at some point.   The dance numbers are horrible and so is the outfit Tony wears onstage - so bad it makes you long for the white suit of his Bee Gee-loving days.   Staying Alive Info

Forgotten Film:  Tom Jones (1963)  This British comedy was nominated for 10 Academy Awards and won four Oscars, including Best Picture and Best Director.  Albert Finney plays the title role of the bastard son of a nobleman.  He is in love with a woman (played by the lovely Susannah York) who is too high in social status to ever be able to marry him..  Tom decides to go into the world and find his fortune, and he soon discovers that he has great and unlikely talent for wooing women and getting into trouble.  Finney is incredibly funny and winning charming as he travels from one woman to another.  This film breaks a lot of barriers, using a silent film sequence in the opening, and often the actors look directly into the camera, addressing the audience as if they are part of the gang.  Tom Jones is a funny and whimsical film but also has one of the greatest seduction scenes of all time when Jones and a woman he has just met (played by Joyce Redman) share a meal, one that gets more sensual as they work their way through the menu.  My Rating:  I Would Pay To See it Again   Tom Jones Info

In Case You Missed It (A Film Just Released on DVD):  Water for Elephants  (2011)  Robert Pattinson (Twilight) plays a veterinarian student at the height of the 1930's depression who suddenly loses his parents in an accident and runs away to join a circus.  Unfortunately, this circus is run by a man (played by Christoph Waltz) who treats his workers like a mafia mob boss by killing people instead of just firing them.  Pattinson can't help but fall in love with the star of the circus (played by Reese Witherspoon), which is bad news and destined for trouble, since she is married to Waltz.  I found that although this film is very lush-looking with intriguing scenery, it's flawed because Pattinson just didn't have the acting chops to keep up with the Oscar-winning Waltz and Witherspoon.  My Rating:  Bargain Matinee   Water for Elephants Website

In Memory of Ed Wood (A Movie I've Only Seen in Trailers but Just Looks Like a Bad Idea):  Alvin and the Chipmunks: Chip-Wrecked   Do we really need a third film with these high pitched squirrels?  I think this film will stink, and, add to that, almost everyone in this film is a TV actor/actress with not one A-Lister among them.   Chip-Wrecked Website


Weird Credits:  From the credits of Puss in Boots:  Whistler


Flictionary (a Definition of a Film Term)  Location Manager:  The Location Manager is responsible for getting the rights to use locations in films.  This person confirms and negotiates, with the property owner, the licenses and ability to use the property.


Coming Soon to a Theatre Near You:  Hugo  Martin Scorsese (Taxi Driver) directs this 3-D film about a young orphan in 1930's Paris who secretly lives in a train station and is bound and determined to figure out the mysterious almost robot-like contraption his father left him.  Hey, it's Scorsese doing a family film - should be really interesting.   Hugo Website 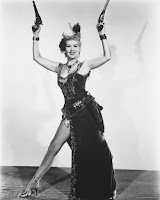