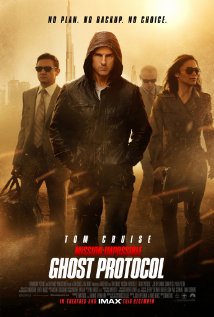 My View: : Impossible - Ghost Protocol (2011) Ethan Hunt (Tom Cruise) is back, but there is a problem...the Kremlin was bombed, and Ethan's Impossible Mission Force is blamed for it.  Now, the Force must go rouge and travel across the world to find and stop those behind the bombing. Parts of this film were shot with IMAX cameras, and it is worth the extra money to see it in that format. The skyscraper scenes are worth the price of admission and, amazingly, Cruise does almost 90 percent of those stunts. What I liked about this film is it's more of a team film, where each member is just as important as Ethan. There is great chemistry between Simon Pegg's tech specialist and Jeremy Renner's character, a newcomer to the team. This is a fast paced, high adrenaline film that doesn't stop moving from the great opening credits until the final frame. My Rating: Full Price   Mission: Impossible - Ghost Protocol Website

My View: The Girl with the Dragon Tattoo (2011) In this remake of the 2009 Swedish film of the same name, Daniel Craig plays, Mikael Blomkvist, a well known journalist who was hired by one of the wealthiest families in Sweden to solve the murder mystery of a girl, a murder that occurred more than 40 years ago.  There is, however, more to this case than just a murder, and Craig enlists the help of a computer hacker/investigator, Lisbeth Salander, played by Rooney Mara.  Lisbeth doesn't have the greatest of social skills, and she looks as if she has just come from a tattoo convention, but she is a superior investigator with a photographic memory. This film is more than 2 and half hours long, however it moves at a quick pace, and the cinematography perfectly captures the frozen country. I loved this movie until the last 15 minutes, which I hated.  I won't tell you why (no spoilers from me) other than to say the makers of the film have a lot to fix in the planned remaining two sequels. My Rating: Full Price   The Girl with the Dragon Tattoo Website

My View: The Artist (2011)  Some of you are going to stay away from this film because it is in Black and White and more importantly, is a silent picture, but then you will miss one of the best pictures of the year and possibly this year’s Best Picture at the Oscars. For those of you who have never experienced a silent picture, this film has only a music track, you don't hear the actors voices, and there are title cards for dialogue that the audience has to read. This is the story of a dashing silent screen star (played by Jean Dujardin) who is a major box office draw (along with his co-star, a very cute dog).  Dujardin encounters a young woman (played by Berenice Bejo) who wants to break into the film industry, so he helps her get a small part in one of his films.  While her fame begins to rise, his popularity begins to fall as he is pegged as only a silent film star and film sound has arrived. This is a funny, warm movie with a great score, and Dujardin lights up the screen in a masterful performance. The film is also helped by a great supporting cast that includes John Goodman as the studio boss, James Cromwell as the chauffeur and Penelope Ann Miller as the actor’s unsupportive wife.  It's an incredible experience, and one not to be missed. My Rating: I Would Pay to See it Again   The Artist Website

Indyfest (A Look at a Small, Indie or Foreign Film: Young Adult (2011) Charlize Theron plays a writer of young adult fiction who returns to her hometown with an urge to relive her high school glory days. She sets out to rekindle a romance with her old boyfriend who appears to be happily married and enjoying being a new father. This film is from the director of Up in the Air (Jason Reitman) and the writer of Juno (Diablo Cody).  While it doesn't quite live up to the quality of those two films, it is still a funny, dark comedy with one of the least likable main characters ever in a film. Theron's character just never quite gets it and prefers to live in a fictional world that she has created for herself, much like the characters she created in her book - always looking for that storybook romance, but never finding it. My Rating: Cable   Young Adult Website

Family Fare: The Adventures of Tintin (2011) In this animated film, directed by Steven Spielberg, kid reporter, Tintin goes on an adventure to find a sunken ship full of treasure. Tintin has two companions on his journeys - a loyal dog named, Snowy, and a drunken ship’s captain named, Haddock. Capt. Haddock may be the key to solving the mystery of the treasure's location. This is a realistic, animated movie, and, at times, seems as if it is a live action film.  It uses its animation to full effect, and a chase scene in is right up there with any Indiana Jones movie. This is not a movie for young children, as there are quite a few violent fight sequences, but it is a rousing adventure film that has many twists and turns. My Rating: Bargain Matinee   The Adventures of Tintin Website

Family Fare: We Bought A Zoo (2011) Matt Damon plays a recently widowed father who leaves his job at a newspaper to buy a small, rural zoo in hopes of reconnecting with his son and daughter. The zoo is in a rundown state of disrepair and is managed by a motley crew led by a very young head zookeeper, played by Scarlett Johansson. Damon and his family don't really know what they have signed up for, and their learning curve is steep, as Damon soon realizes he may be in over his head.  What I liked about this film is that the romance between Damon and Johansson is not the main focus of the movie.  This film is truly about a family who is trying to heal and is a heartwarming family film that all will enjoy. My Rating: Bargain Matinee   We Bought a Zoo Website
Weird Credits:  From the credits of The Adventures of Tintin:  Snowy Vocal Editor
Coming Soon to a Theatre Near You: Next week I will pick my top ten picks of 2011 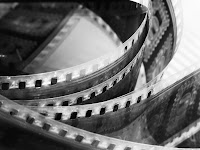 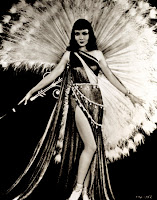