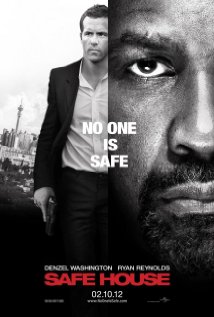 My View:  Safe House (2012) A young, inexperienced CIA agent (Ryan Reynolds) is in charge of a remote safe house. His world is changed when a legendary criminal (Denzel Washington) becomes his prisoner. The safe house comes under attack, and he has to move his prisoner to a new location. I enjoyed the interplay between Reynolds and Washington, but this film is extremely predictable, and I really didn’t like the “shaky-cam” action sequences. It’s always fun to watch Denzel be the bad guy.  I just wish this film had a few more twists and turns to its plot.    My Rating: Bargain Matinee   Safe House Website

My View:  The Vow (2012) A newly married couple (Channing Tatum and Rachel McAdams) are in a car accident and, when she recovers from a coma, the wife doesn’t remember anything that has happened in the last few years, including all her time with her husband. So, now he must try and court her again to win the heart of the woman, his wife, who now doesn't know him. This film is based on a true story and is not a Nicholas Sparks book (The Notebook, Message in a Bottle), but it plays exactly like one. The biggest problem this movie has is that McAdams doesn’t do much more than act either mad or confused, and the film asks Tatum to carry more of the acting load, a job he isn’t quite up to doing.  I watched this film  while I was sitting next to two twenty-something girls who started crying 5 minutes into the film, and they didn’t stop until the film ended. So, between that, and the fact that Tatum takes off his shirt 6 times (7 if you include a photo of himself shirtless that the camera lingers on in one shot), I believe the film hits its target audience (twenty something girls, gay men, etc.).   My Rating: Cable   The Vow Website

Family Fare: Journey 2: The Mysterious Island (2012) A young man (Sean Anderson) gets a mysterious coded signal from his grandfather (Michael Caine) and sets out with his step-father (Dwayne “The Rock” Johnson) to find the  that Jules Verne wrote about. They crash on the island in a helicopter and set out, along with the helicopter pilot (Luis Guzman) and his daughter (Vanessa Hudgens) to find the grandfather. The island is full of giant bees, tiny elephants, and humongous lizards (which The Rock punches in the face) that they encounter in their travels. This is a horrible film with bad special effects, hardly any use of 3-D and equally bad overacting complete with a storyline that will bore all ages.  Let’s sum it up this way:  this is a film where The Rock sings, not once, but twice, What A Wonderful World….no it’s not Rock,  not if your going to make a film like this.  Note:  There is a fun Warner Brothers cartoon before the film called Daffy's Rhapsody.   My Rating: You Would Have to Pay Me to See it Again   Journey 2: The Mysterious Island Website

The 50 (A Movie From My Best/Worst Films of All Time)
26th Best Film
The Grapes of Wrath (1940) Directed by John Ford (for which he won an Oscar), this is a tale of hardship and redemption as we follow a family who are kicked off their land in the “Dust Bowl” through their travels across America to the promised land of California.  The family, though, finds that even when things appear to be better, there are still hard times ahead. Henry Fonda, in one of his best roles, is brilliant as the oldest son, who tries to fight for his family and his fellow man against the odds.  This is a deeply moving film that is heartwarming one minute and heartbreaking in another.  A timeless film for the ages.   The Grapes of Wrath Info

Forgotten Film:  Robinson Crusoe on Mars (1964) In a modern-day telling of the Daniel Defoe tale, instead of a ship-wreck in the ocean, an astronaut (played by Paul Mantee) crash lands on Mars and must learn to survive on a barren and hostile planet with only a monkey (who was along for experiments in space) as his companion. This is a beautiful film, full of rich colors, and the film plays out much like the original book.  Crusoe may think he is alone on this planet, but there may be other inhabitants, some who may want him dead.   My Rating:  Full Price   Robinson Crusoe on Mars Info

In Case You Missed It (A Film Just Released on DVD):  The Twilight Saga: Breaking Dawn – Part I  Bella and Edward are getting married! Who’s coming to the wedding? Where will they honeymoon? Will Bella survive the honeymoon night of lovemaking with a vampire? If you want answers to these questions and more, see the film.  If not, stay far, far away from this film.  My Rating: You Would Have to Pay Me to See it Again   The Twilight Saga Website

In Memory of Ed Wood (A Movie I’ve Only Seen in Trailers but Just Seems Like a Bad Idea):  Act of Valor (2012)  A film about a team of Navy SEALS who go on a mission to rescue an American agent. The film stars real Navy SEALS, so don’t think the acting will be the top priority of the film.   Plus it’s from the same people who gave you Judy Moody and the Not Bummer Summer and Shark Night 3D.   Act of Valor Website

Weird Credits:  From the credits of Journey 2: The Mysterious Island: Mr. Johnson’s Hair Stylist (His head is bald in this film.)