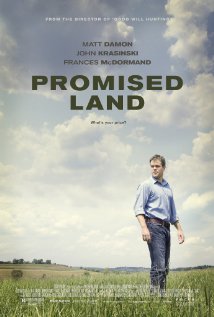 My View:  Promised Land (2012) Steve Butler (Matt Damon) and Sue Thomason (Frances McDormand) go to a small Pennsylvania farming community to buy natural gas rights. The locals are receptive to the possibilities of a financial payout until a grassroots environmentalist (John Krasinski) arrives in town and begins to inform the townspeople about the big gas company and their controversial use of fracking, a procedure that may endanger their way of life. Gus Van Sant, the film's Director, does an admirable job of making us care not only for the farmers and their families but also for these two salespeople who see what they do as not evil, but an opportunity for the town to survive in such a tough economy. Matt Damon is perfect in the role of Steve, a sort of likable every-man, who saw his own small farming town die when a tractor factory left the community. Krasinski (who co-wrote the script with Damon) is enjoyable as the rival to Damon and whose character not only tries to stop Damon from drilling for gas, but also vies for the affection of a local school teacher (Rosemarie DeWitt). I didn't like the ending of the film, it took the easy way out, and came way too quickly for my tastes.   My Rating: Bargain Matinee   Promised Land Website

1).  Argo  (2012)   Ben Affleck keeps getting better as a director, and he gives this film a sensational pace that builds toward an extraordinary ending. What I really liked about this film is that it isn’t all drama based; there are some very funny moments in this film, most of the time, supplied by Alan Arkin and John Goodman, who play two Hollywood filmmakers who help Affleck’s character set up the fake movie, including providing a script and publicity. This is a film that, at its conclusion, you just might feel the urge to clap.   Argo Info

2).  Skyfall  (2012)  It’s a film that is more about characters than gadgets, and James is questioning whether he can continue to be 007, both physically and mentally.  Daniel Craig gives us a much more layered performance than in past Bond films, and Javier Bardem is amazing as the complex , former spy who is now out to destroy MI6. I loved this film, with one of the best Bond villains ever, and even if you aren’t a James Bond fan, you will like it.   Skyfall Info
3).  The Avengers  (2012)  Writer/Director Joss Whedon has done an astounding job creating one of the best action adventure films in the past ten years. The film is not only full of phenomenal action sequences, but it also has a surprising amount of humor, and audiences may have to see the film twice to catch all of the funny deliveries. Downey is the main force behind the storyline, but all the superheroes get their moment in the sun, with the Black Widow and The Hulk characters particularly standing out.  I especially enjoyed The Hulk, who smashes everything in sight, in the final battle sequences.   The Avengers Info
4).  Searching for Sugar Man  (2012)  This is one of the best documentaries I have seen in the past year. It perfectly uses Rodriguez’s music to highlight the story with interesting interviews and an intriguing use of animation to recreate scenes in the past that builds an interesting story and makes this a film to be enjoyed. This is a great film that celebrates a long lost musician who was never appreciated in America but became an important musical figure for so many people he never knew.   Searching for Sugar Man Info

5).  Silver Linings Playbook  (2012)  Jennifer Lawrence brings both an energy and a vulnerability to the screen, driving the story along, and sometimes at break neck speed. The film has an outstanding cast with Julia Stiles, Robert DeNiro, Jacki Weaver and Chris Tucker shows a wonderful comic touch as Pat’s friend from the institution.    Silver Linings Playbook Info

6).  Beasts of the Southern Wild  (2012)  It’s a magical film set partly in reality and partly in fantasy, and you never quite know if what you are seeing is real or not. Quvenzhane Wallis as Hushpuppy is stunning in this film and gives such a strong and multilayered performance that some adult actors wouldn’t be able to do.  After seeing this film, you will feel richer for having experienced it.   Beasts of the Southern Wild Info

7).  Sleepwalk With Me  (2012)  This is a funny, smart film based on writer/director/lead actor Mike Birbiglia’s own life.  Birbiglia shows how hard it is to break into the stand-up comic business, and once you get into the business, how hard the life is.  He does it with humor, and his dialogue is just so dead on, and captures a sort of sad sack type of humor.  Ambrose is excellent as the girlfriend who supports Matt at first but soon learns that their relationship will be tested by his profession, especially after he starts using his real life experiences for material.   Sleepwalk with Me Info

8).  Bernie  (2012)  Writer/Director Richard Linklater (Slacker, The School of Rock) does a masterful job of capturing the life of a small Texas town, especially showcasing all of the townspeople who are willing, at the drop of a hat, to give their opinion. Jack Black is fun to watch as the very effeminate, but earnest Bernie, and Matthew McConaughey, in one of his best performances in recent years, shines as the tough as nails, baseball bat wielding district attorney. This is one of those films that hits just the right notes and makes it fun to go to the movies.   Bernie Info

9).  The Hunger Games  (2012)  Fans of the book were very happy as the film follows most of the book plot with almost no exceptions. Jennifer Lawrence is perfect as the rebellious Katniss, a fierce hunter who isn't afraid to stand up for herself.  The rest of the cast is sound with outstanding work from Josh Hutcherson who plays Katniss's Hunger Games partner, Peeta, and surprisingly, Lenny Kravitz as Cinna, the designer of Katness's look at the games (think Project Runway on steroids).  This film doesn't disappoint, and it’s fans will be counting down until the sequel.   The Hunger Games Info
10).  The Imposter  (2012)  A documentary about a boy who went missing from a Texas town that shows up in France three years later.  This film does a phenomenal job of not giving away too much, too soon.  It’s a fascinating tale that has more twists and turns than most mystery books.   The Imposter Info

11).  Moonrise Kingdom  (2012)  Writer/Director Wes Anderson (Rushmore, Fantastic Mr. Fox) has created another one of his magical worlds where normal is the exception, not the rule. This film has an all-star cast and makes the most of it with Edward Norton as the uptight Scout Master, Bruce Willis as the mild-mannered police chief, Captain Sharp, Bill Murray and Frances McDormand as Suzy’s parents, who are more interested in their law briefs than their child. This is a funny, quirky film that celebrates love and the adventuresome sprit of childhood.   Moonrise Kingdom Info

12).  The Cabin in the Woods  (2012)  The best way I can describe this film is it's like nothing you have seen before - a horror movie with a ton of comedy in it.  As groundbreaking a TV show that Buffy the Vampire Slayer was (Director Drew Goddard and Producer Joss Whedon, were the forces behind that show) this is a cutting-edge and innovative film.  It’s one of the  best films I have seen this year and has a highly inventive plot about which I can’t go into too much detail so I don't give away surprises.  And, there are many surprises in it!  This is one of those films where, after I saw it, I wanted to immediately buy another ticket and see it again.   The Cabin in the Woods Info

13A).  Pitch Perfect  (2012)  Anna Kendrick is exceptional in this film. It’s fun, great music and the quality of the humor In this film is superior to any of the other comedies that have come out this year. Pitch Perfect Info
13B. The Perks of Being a Wall Flower (2012) I absolutely loved this film and how it shows how strange, off-beat people can find and support each other, even in the scary world of high school. This is an enjoyable film that has terrific dialogue and some excellent performances, especially Logan Lerman, who gives heart to the role of Charlie. This is one of those films that young people will watch over and over again because it so realistically and lovingly shows what it’s like to be a teenager in high school.   The Perks of Being a Wall Flower Info

14).  Life of Pi  (2012)  This is a film that you need to see in theatres because its beauty almost spills off the screen. Suraj Sharma plays Pi, and he gives a multilayer performance. The Tiger is mostly animated, but it's so well done that you never question its authenticity. This is deeply spiritual film and shows a young man embracing his religious beliefs to make it through this disaster. And, after seeing this film, you will want to talk about it.   Life of Pi Info
15).  The Sessions   (2012)  This is one of the better films of the year with awe-inspiring performances by John Hawkes and Helen Hunt, with Hawkes giving his performance with just his voice and his eyes. The film is based on a true story and is about 80 percent accurate, with the poems in the film written by the real Mark O’Brien. I am warning you that there is lots of nudity, and you do see the sex acts between Hawkes and Hunt, but they are tastefully done, with the scenes between the two characters filled with humor and warmth.   The Sessions Info

Please note that as of the publish date I have not seen the following which are showing up on a number of critics lists:  Holy Motors, Zero Dark Thirty, Rust and Bone, Amour. 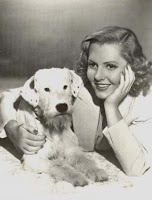