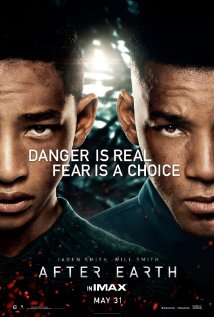 My View:  After Earth  (2013)  PG-13   Due to some cataclysmic events, Earth was abandoned over 1000 years ago. Cypher Raige (Will Smith) leads a crew on a training mission, when he and his son, Kitai (Jaden Smith), are the sole survivors of a crash landing. The planet they land on is Earth, and now father and son must team up to survive a world populated by dangerous, wild animals.  Let me first say that the CGI (the computerized special effects) in this film are horrible.  I felt like I was back in the 1970’s watching the TV show, Land of the Lost.  Know going into this film that it’s Jaden Smith’s movie.  He does all the action work while Will is stuck in the crashed space ship.  Jaden has shown, in the past (The Karate Kid), that he can carry the film, but in this one, he doesn’t quite connect with the audience as his character does a lot of freaking out.  The storyline is weak, and there are plot holes that an asteroid could fly through.  Both father and son use weird accents in the film, and it takes about 10 minutes before you get comfortable and are able to understand what hey are saying.   The film is very predictable, and you can see the ending coming from a mile away.  The film was directed by M. Night Shyamalan, whose track record has not been very good lately (see The Last Airbender, on second thought don’t’), so it’s not a good thing when, at the end you say, “Well it’s not as bad as…”.    My Rating:  Cable   After Earth Website

My View:  Now You See Me  (2013)  PG-13    A team of illusionists, led by J. Daniel (Jesse Eisenberg) and Merritt (Woody Harrelson), are robbing banks while performing magic in front of audiences. Its up to an FBI agent (Mark Ruffalo) and an Interpol detective (Melanie Laurent) to not only stop the team, but to find out what’s the team’s magic secret of robbery success?  This is another film where a great cast is let down by a lesser script.  The film starts off with a bang, as we see how the four magicians come to form a team.  The first heist they do is thrilling, but the big problem with the movie is that it peaks with that heist, and all the other heists aren’t as flashy or fun.  Eisenberg and Harrelson play off each other really well, but I never really saw the sparks between possible love interests Ruffalo and Laurent.  I was let down by the ending of the film which, much like a bad magic trick,  went out with a whimper instead of big finish.    My Rating:  Bargain Matinee   Now You See Me Website

Indiefest:  What Maisie Knew  (2012)  R   A young girl, Maisie (Onata Aprile), is caught in the middle of a custody batter between her parents, a rock singer (Julianne Moore) and an art dealer (Steve Coogan).  This movie is worth seeing because of the performances of the cast.   Alexander Skarsgard, who gives a multi-layered performance as the shy, slightly goofy bartender boyfriend of Moore’s character, is worth the price of admission.  But Onata Aprile, as Maisie, is exceptional in this film, giving everything she has to the role with a performance that is mature and deep.  This is a movie that you may not always like where it’s headed, but I think you will like where it ends up.    My Rating:  Full Price   What Maisie Knew Website

Indiefest:   Frances Ha  (2013)  R  To say that Frances (Greta Gerwig) is a free spirit would be an understatement. She lives in New York but doesn’t have an apartment, she’s a dancer but doesn’t get paid for it, and her best friend hasn’t spoken to her in weeks. Now, Frances decides that its time for a change. Hope New York City is ready for what Frances has in mind.  Greta Gerwig is cute and appealing as Frances, going through life not knowing exactly where she's headed and how she will get there. Mickey Sumner, who plays Sophie, Frances best friend, does a clever job of being the slightly saner of the two.  My biggest problem with this film is Frances, while cute, is annoying as hell.  She is one of those characters that you just want to shake and tell her to start making some smart decisions.  The film was shot in Black and White, as an homage to Woody Allen’s 1979 film, Manhattan, and you can hear in some of the film, some of those famous Allen style dialogue.  I wanted to love this film, and there are a few great scenes in the film including a wonderful run/dance through the streets of New York, but ultimately, I don’t love it…I just like it.    My Rating: Bargain Matinee    Francis Ha Website

Forgotten Film:  Two Lane Blacktop (1971)  R   The Driver (James Taylor) and The Mechanic (Dennis Wilson) are two guys who travel across the country, racing anybody and anywhere, with their supped up 1955 Chevy.  Along the way they acquire a passenger, known simply as, The Girl (Laurie Bird).  They meet G.T.O. (Warren Oates) and, after an angry confrontation, The Driver and The Mechanic agree to race G.T.O across the country on Route 66.  The winner wins the other's car.  This is a fascinating film that starts out as a normal narrative but gets more and more abstract as the movie continues.  While a flawed film,  mostly because the two out of the three main leads aren’t actors, it’s still a film to watch, especially if you love racing and cars.   My Rating:  Bargain Matinee    Two Lane Blacktop Info

In Case You Missed It (A Film Just Released on DVD):  The Last Stand (2013)   R  I didn’t care too much for this film that marked the starring comeback of Arnold Schwarzenegger.  Schwarzenegger plays a sheriff of a small border town, who, along with a very inexperienced group of deputies, has to stop a drug lord from escaping to Mexico.  The film never quite makes sense and just seem to be a way for Arnold to shoot some guns.  And yes, that is Johhny Knoxville in the movie poster, playing a wacky gun collector.    My Rating:  Cable    The Last Stand Website

Weird Credits:  From the credits of Now You Can See Me:  Parking Assistant 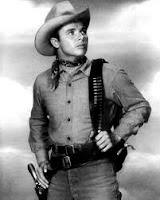