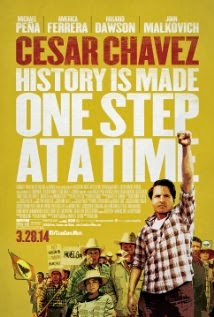 Indiefest:  Cesar Chavez (2014)  PG-13  A biography of the civil-rights activist Cesar Chavez (Michael Pena) who, in the late sixties and early seventies, organized farm laborers into unions.  Michael Pena is the reason to see this film as he offers a powerful yet understated performance.  It’s an earnest film that doesn’t pull any punches and shows the horrible conditions under which farm workers worked.  I enjoyed America Ferrera’s performance as the feisty wife of Chavez who literally and figuratively stands by her man. The film is a little long and does drag a bit when Chavez is on a lengthy hunger strike, but this film brings to the screen a story that is inspirational.  My Rating: Bargain Matinee  Cesar Chavez Website
Indiefest:  The Lunchbox (2013) PG  Mumbai businessmen get their lunch by means of a world famous delivery system. It’s a system so efficient, it only wrongly delivers one lunch out of a million. But, when unhappy housewife Ila’s (Nimrat Kaur) lunch for her husband is mistakenly delivered to widower Saajan (Irrfan Khan), it starts a chain of events that will change their lives.  This is an unconventional love story between two people who are both extremely lonely.  Irrfan Khan is magnificent in the role of the sad sack Saajan, who is so set into his ways until he starts receiving Ila’s lunches. Nimrat Kaur brings such a natural grace to the screen that you almost instantly like her (and hate her husband).  I loved this film and its slow moving love story that takes place in a fast paced world.  My Rating:  I Would Pay to See it Again  The Lunchbox Website
Forgotten Film:  Targets (1968) R  A veteran horror film actor (Boris Karloff) has just completed his last film before retiring.  His publicity team pushes him to appear at a drive-in to promote the film.  A troubled young man (Tim O’Kelly) has an obsession with guns that we just know is going to lead to something bad happening.  This film, directed by Peter Bogdanovich, isn’t necessarily a good film, but it’s an interesting one to watch because of Karloff is essentially playing himself.  It’s that glimpse into the actors world that makes this film fun to watch.  My Rating:  Bargain Matinee  Targets Info

Weird Credits:  From the credits of Cesar Chavez:  Hair Trainee

Coming Soon to a Theatre Near You:  Alan Partridge (2013) R Steve Coogan plays a radio DJ, Alan Partridge, whose small local station gets taken over by a big media conglomerate.  When almost everyone gets fired, it sets off a chain of events that eventually lead to the station being held for ransom and Alan having to find a way to defuse the situation.  Coogan has hit his stride lately with Philomena (2013) and The Trip (2011), so I am anxious to see this film.  Alan Partridge Website