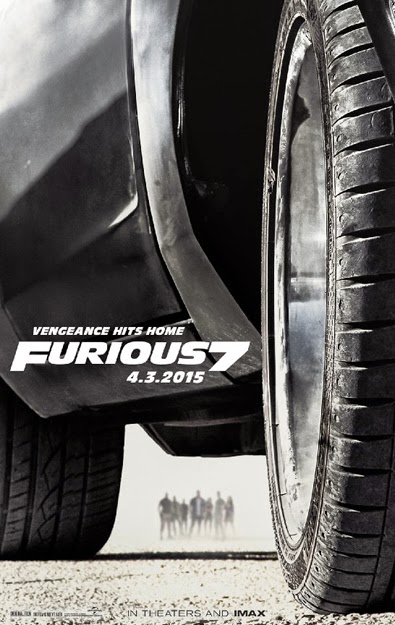 My View: Furious 7 (2015) PG-13   Deckard Shaw (Jason Statham) is out for revenge, and he is targeting Dominic Toretto (Vin Diesel) and his family. It’s time to get the gang back together and take down Mr. Shaw.  I loved Fast & Furious 6 (up to that point, I wasn’t a fan of the series), mostly because writers decided to make the Furious crew superheroes who could fly from one car to another when jumping off a bridge. This film brings more of the same impossible stunts and deadly looking accidents where the crew just walks away unscathed. I liked this film, but I didn’t love it, mostly because while Furious 6 was a new take on the series, this film is just more of the same (and much longer). There is horrible dialogue, The Rock is only in the beginning and ending of the film, and some of the acting is amateurish (looking at you, UFC fighter Ronda Rousey and Iggy Azalea), but it’s still loads of fun to watch. The skyscraper scenes from Abu Dhabi are worth the price of a ticket. If you haven’t seen any of the other Fast & Furious films, you can see this one, as the plot is easy to figure out. The very last portion is a tribute to the late Paul Walker, who died in an unrelated car accident during the filming of this movie.    My Rating: Bargain Matinee   Furious 7 Website

Indiefest: Danny Collins (2015)  R   Danny Collins (Al Pacino) is an aging rock star who has been self-absorbed his whole life. After given a letter written to him by John Lennon, he decides to try to right the wrongs of his life.  This is the best performance that Al Pacino has done in the last five years. He plays a man who, instead of writing his own material, has been creating very popular songs written by teams of other writers. I loved the cast in this film with Annette Bening giving an outstanding performance as the manager of a New Jersey hotel that Danny stays at and Christopher Plummer, who steals the movie as Danny’s world-weary manager. It’s an enjoyable film with great performances that explores the price of getting famous and then staying there.   My Rating: Full Price   Danny Collins Website 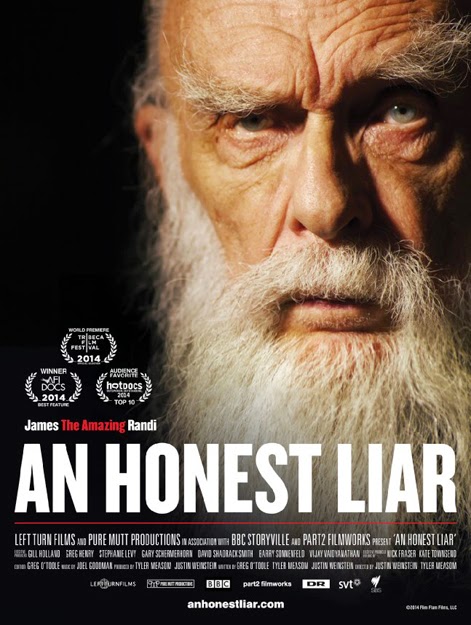 Indiefest: An Honest Liar (2014)    Documentary about James “The Amazing” Randi, a world-famous magician and escape artist who has dedicated his life to exposing psychics, faith healers, and con-artists. For a man who has practiced the art of deception all his life with magic, there is one secret that he is hiding from the world. FULL DISCLOSURE: I backed this film on Kickstarter, as I have been a fan of James Randi for many years. This is a fascinating look at a very complex, smart man. His appearances (shown in this film) on the Tonight Show with Johnny Carson were landmark moments in television, and this movie gives us all the background on those appearances where he exposed phony faith healers and so-called psychics. The film does take a hard look at some of the things that Randi has done, and, to his credit, he is upfront and candid about those issues.  I loved the scenes when Randi used to perform his escapes from straitjackets, usually while hanging upside down, as I had never seen that footage of his younger days. It’s an interesting film about an “Amazing” man.   My Rating: Full Price   An Honest Liar Website

Indiefest:  Kumiko, the Treasure Hunter  (2014)  Kumiko (Rinko Kikuchi) is a Japanese woman who hates her job, is criticized for being single at 29 by her mother, and has a her only friend, a rabbit.  She goes on a treasure hunt and finds an old VHS copy of the 1996 movie Fargo.  She convinces herself that the money that one of the characters buried in the snow really happened and travels to the U.S. to find the hidden money. This is a strange but interesting film that drags a few times but ultimately finds it’s footing and becomes a film worth watching. Kikuchi has the difficult task of making a character, who isn’t very appealing or likable, someone that you root for to succeed. It’s heartbreaking at times but also inspiring.   My Rating:  Full Price  Kumiko, the Treasure Hunter Website

Indiefest: The Hunting Ground (2015)  PG-13  A documentary about sexual assaults on U.S. college campuses, how universities are not taking the assaults seriously and how a group of student activists are trying to force the schools to deal with the issue.  This a scary, maddening film that makes you want to write letters and make calls to the very Universities that we trust our sons and daughters to take care of. Every year between 16 and 20 percent of college underclass students will be sexually assaulted.  The film looks at how the accuser is almost always treated worse than the accused (even though 95 percent of all sexual assaults are found true). A portion of the film looks at sexual assaults done by fraternities and by college athletes and how the colleges and universities almost always side with the frats and athletes. This is a film that every parent needs to see before they send their child off to school.    My Rating: Full Price   The Hunting Ground Website

Forgotten Film: Rolling Thunder (1977)  R   Major Charles Rane (William Devane) has just returned to Texas after spending years as a POW in Vietnam.  He is given a few gifts by his community in recognition as a war hero.  A couple of thugs break into his home, kill his wife and child and mangle his hand.  Now, Rane is out for revenge and won’t stop until the people who murdered his family are dead. This is a gritty film with a lot of violence, but at its core is an unbelievable performance by William Devane. A very young Tommy Lee Jones plays the vet who Rane enlists to attack the thugs and get his revenge.My Rating: Bargain Matinee   Rolling Thunder Info

Weird Credits: From the credits of Furious 7: On-Set Food Stylist 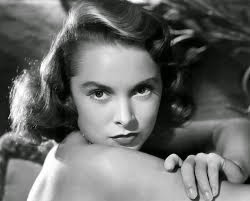