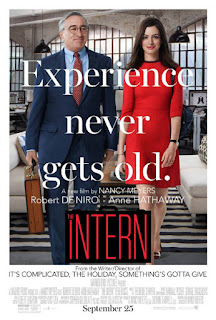 My View:  The Intern  (2015)  PG-13   70-year-old widower Ben (Robert De Niro) isn’t happy in his retirement, and he wants to experience something new,  so he decides to become a “senior intern” at an online fashion site. The fashion site was founded and is run by Jules (Anne Hathaway), but sales are slow, and the company’s board is considering cutting Jules’ power. Jules needs help, and Ben might just be the right man for the job.  I liked this film and enjoyed De Niro and Hathaway’s performances. De Niro, in this film, plays a man who you would want as a father.  Ben is kind and wise with a knack for giving his co-workers just the right advice. Hathaway’s character, Jules, is someone who is worth rooting for, and you want her to succeed. The first two-thirds of this film was enjoyable but with a lightweight story with two likable leads. My problem with this film is that the final third doesn’t match the rest of the movie. The screenplay,  written by the movie’s director, Nancy Meyers, puts Hathaway’s character into a corner that she just can’t get out of with any real resolution. The ending feels shallow and way too easy.  This is a feel good film that you will quickly forget, maybe as soon as you get to the theatre parking lot.      My Rating: Bargain Matinee   The Intern Website

Familyfaire:  Hotel Transylvania 2 (2015)  PG  Dracula (Adam Sandler) and the hotel gang are back. Jonathan (Andy Samberg) and Mavis (Selena Gomez) get married and have a baby, Dennis (Asher Blinkoff). The question is, will Dennis turn into a vampire or will he be human? And, if he remains a human, will Dracula, and the gang be okay with that?  This is a fun family film that kids will love and one where adults won’t fall asleep. I am not an Adam Sandler fan, but he does an admirable job as the dad vamp who just wants his daughter to be happy and his grandson to have a great life. The film moves at a quick pace but loses steam about 15 minutes from the ending.  While not on the level of a Pixar film, it’s not bad, and kids over six will enjoy it.  The film is a little violent toward the ending, and the kindergarten group probably should skip it.  My Rating: Bargain Matinee   Hotel Transylvania 2 Website

Indiefest:  Sleeping with Other People  (2015)  R  Jake (Jason Sudeikis) and Lainey (Alison Brie) make unlikely friends. Jake is a womanizer, and Lainey is a serial cheater. After losing their virginity to each other in college, they meet up at a “sex addict anonymous” session years later and decide to strike up a non-sexual friendship. The big problem is they are attracted to each other but think that sex will ruin the friendship.  The two leads of Sudeikis and Brie are brilliant together. They play off each other like a stand-up comedy team. This is the best performance I have seen Sudeikis do in years. He is quick to the draw with a quip and makes you root for a guy whom you should loathe. He gives a character a lovable vibe that just comes off in waves on the screen. The chemistry between Brie and him is outstanding, and there seems to be a real connection between the two. Brie gives a masterful, comedic performance of a girl who is obsessed with a man who will never truly fulfill her. She makes Lainey relatable even though we don't understand why her character is so messed up. I loved this film and especially enjoyed the unconventional ending. This is a “rom-com” for today's app dating, “swipe right” world. “Sleeping with Other People”  is funny and touching, filled with characters you might not want to date but would like to spend some time getting to know over a beer or two.    My Rating: Full Price   Sleeping with Other People Website

\
Indiefest:  A Brilliant Young Mind  (2014)  Ethan (Asa Butterfield) is autistic and has trouble dealing with people. He takes comfort in numbers, and his mother (Sally Hawkins), a widow, is determined to keep Ethan’s life as normal as possible.  A math teacher (Rafe Spall) at Ethan’s school thinks that he is talented and could be a candidate for the International Mathematics Olympiad. This is a marvelous film that overcomes a slightly schmaltzy script with terrific performances by Butterfield, Hawkins and Spall. The story starts to move when Martin and Nathan began bonding over each other's love of math. Asa Butterfield is the reason to see this film. He does a marvelous job in a part where his character rarely talks. He uses his physical skills to create the wonder and emotion as his character starts opening up to the outside world. We see the delight in his eyes when he solves a problem. He has great screen presence, and he works well with Sally Hawkins and especially Rafe Spall.   “A Brilliant Young Mind” is a moving film about finding your place in the world. It might be a little scary and overwhelming at times, but life deserves the effort. It's a winning film that uses the strong performances of its leads to make a film that is well worth seeing.     My Rating: Full Price   A Brilliant Young Mind Website

Indiefest:  Ashby  (2015)  Ed (Nat Wolff) is a 17-year old high school student who is just trying to figure out his place in the world.  He makes friends with his neighbor, Ashby (Mickey Rourke), a terminally ill ex-CIA agent who killed people for a living. Their friendship will change both their outlooks on life. This film attempts to marry to genres:  the hard-nosed story of a man trying to come to terms with his past sins and the teen rom-com where a boy tries to find a way to face his fears and get the girl. The problem is the two just don’t mix. This is a film that tries too hard to be witty and fails most of the time. I liked both Nat Wolff and his love interest in the movie, Emma Roberts, but I never believed that Nat’s character, Ed, could just come off the street and be a starting wide receiver for a high school team. Rourke doesn’t have to work too hard with his character Ashby as he mostly just has to be a worn out Mickey Rourke. The film’s ending is too predictable to have any real impact. This is an Indie film that tries way too hard to be the ultimate “Indie” film.    My Rating: Bargain Matinee

Forgotten Film:  Near Dark  (1987)  R   Caleb (Adrian Pasdar) is from a small town in Oklahoma.  He meets a beautiful girl named Mae (Jenny Wright). They spend the night together flirting and talking. At the end of the night, she suddenly turns into a vampire and bites him on the neck.  Now Caleb is a vampire and has to join a band of southern vampires who roam the highways looking to steal cars and kill innocent drivers.  This is a combination modern western/vampire tale written and directed by Oscar-winning Kathryn Bigelow. It’s a dazzling take on the vampire genre with a storyline that will keep you guessing. The film moves at a quick pace and takes advantage of its accomplished cast led by Lance Henriksen and Bill Paxton. If you like horror movies, then this will be a treat.    My Take:  Full Price   Near Dark Website

Coming Soon to a Theatre Near You:  Steve Jobs  (2015)  The true story of the man who created Apple.  All I have to say is that Michael Fassbender is in the title role. That’s all I need to want to see this film.   Steve Jobs Website 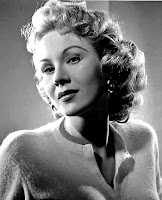