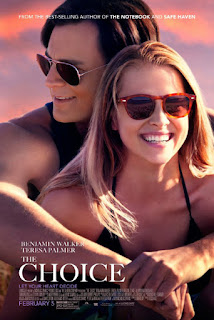 My View:  The Choice  (2016)  Travis (Benjamin Walker) and Gabby (Teresa Palmer) are neighbors who just can’t get along.  Travis is a veterinarian who likes playing the field.  Gabby is studying to become a doctor and has a steady boyfriend (Tom Welling). Only Travis’s sister (Maggie Grace) knows that Travis is about to fall hard for Gabby.  Will Gabby fall equally for Travis?  What makes this film watchable, for all the Sparks schmaltz that’s in this movie, is that Benjamin Walker and Teresa Palmer work well with each other. They have exceptional chemistry on-screen, especially in those moments where they are bickering. There is quite a spark between them, and it's very apparent their characters are attracted to each other from the start, and that draw continues to build throughout the film. My biggest problem with the movie is that it almost slows to a stop when the big crisis starts happening. The crisis goes on way too long, forcing us to experience the agony of the situation for what seems like forever. However, the chemistry between the two lead makes this a movie that fans of Nicholas Sparks films will enjoy.     My Rating: Bargain Matinee   The Choice Website

My View:  Pride and Prejudice and Zombies (2016)  A plague has hit 19th century Britain, and it’s turning the dead into zombies. Elizabeth Bennet (Lily James) has been training her whole life in martial arts and weaponry. Now she, along with Mr. Darcy (Sam Riley), must save the world from the zombie hoard. I enjoyed this film though I will say that it does take a bit of getting used to the blending of Jane Austen with horror. I thought that action sequences were fun, and Lily James did a fantastic job as a samurai zombie killer. I thought there was excellent chemistry between James and Sam Riley, who plays Mr. Darcy. The plot is a little complicated, has a lot of players to contend with, and I didn’t quite understand the logistics of where everything was, but I still had a good time watching this weird mix of genres.    My Rating: Bargain Matinee   Pride and Prejudice and Zombies Facebook Page

Indiefest:  Hail, Caesar!  (2016)  Eddie (Josh Brolin) is a Hollywood “fixer” who helps the studio produce their blockbuster, “Hail, Caesar!” starring the famous actor Baird Whitlock (George Clooney). When Whitlock is kidnapped, it’s up to Eddie to rescue him with the aid of one of the studio’s biggest stars, singing cowboy (Alden Ehrenrech) Hobie Doyle. I liked this film, but with this cast and the Coen brothers as Producers, I should have loved it. I didn’t laugh enough and found the film very quirky. The film barely has a plot because I think the Coen brothers just wanted to make a movie that celebrated the Hollywood of the old studio system of the forties and fifties. We see scenes being shot and then, later (in a screening room or at a premiere), we see those actual scenes. The movies within the movie are the best things about this film. The Channing Tatum dance number is brilliant, and the Scarlet Johansson water dance sequence is fun. Alden Ehrenrech, as the simple singing cowboy, is exceptional and his scene where he’s trying to learn a line with Ralph Fiennes as a director of fancy dramas is brilliant (though it does go on too long).  This is a film whose many parts are scintillating but when pieced together, just don’t mesh.   My Rating: Bargain Matinee   Hail, Caesar! Website

Forgotten Film:  Me Myself I  (1999)  Pamela (Rachel Griffiths) is an unhappy woman. She has sacrificed her home life to put everything into her job.  On her birthday, she gets drunk and finds a picture of a guy (David Roberts) whose proposal she turned down.  She wonders what if she had said yes.  The next day she gets hit by a car and wakes up discovering that she is in a parallel universe where she did marry the guy, and they have a family. Rachel Griffiths gives a winning performance in this funny and sweet film. She is so much fun to watch as she deals with problems she has never before had to handle.    My Rating: Full Price   Me Myself and I Info

Weird Credits: From the movie Pride and Prejudice and Zombies:  Weather Consultant

Coming Soon to a Theatre Near You: Eddie the Eagle  (2016)  Eddie (Taron Egerton) has a dream to compete in the Olympics as a ski jumper. The only problem is he has never ski jumped before, and the Winter Olympics are only a year away. Can he talk Bronson Peary (Hugh Jackman), a washed out, drunken ex-ski jumper into coaching Eddie?  The trailer is funny and charming, plus the film has Hugh Jackman, which is always a plus.   Eddie the Eagle Website

Until the Next Time! 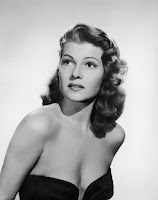