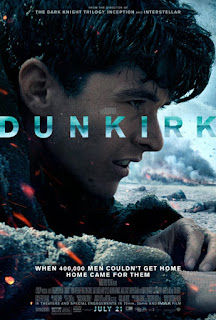 My View:  Dunkirk  (2017)  PG-13  Allied soldiers from Britain, Belgium, Canada, and France are surrounded by the German army on the beaches of Dunkirk. Now, one of the largest evacuations will take place. This is an incredible motion picture experience…a feast for both eyes and ears. The film follows three aspects of the evacuation; from the land, from the air, and from the sea. We follow two soldiers trying to get off the beach by any means necessary. We follow a father and son as they pilot their small ship from Britain to Dunkirk. The air is represented by an RAF pilot who is trying to fight off the Luftwaffe and keep the men on the beach alive. The visuals of this film are stunning. Director Christopher Nolan used IMAX cameras for almost seventy-five percent of the movie, and the detail is astonishing. The battle sequences are brilliant and keep you on your edge of your seat. The score by Hans Zimmer is one of the best I’ve ever experienced and keeps the tension at a high level. The score is  important as portions of the film don’t have any dialogue. This is one of the best films of the year and is meant to be seen on the big screen.  My Rating: I Would Pay to See it Again  Dunkirk Website

My View:  Valerian and the City of a Thousand Planets  (2017) PG-13  A dark force threatens Alpha, a vast space station and home to species from a thousand planets. Special Ops Valerian (Dane DeHaan) and Laureline (Cara Delevingne) are sent to find out what is happening to the space station and fix it. The film is beautiful, and the special effects are dazzling, but the storyline is slow and confusing. The film ends up being a little annoying. I just didn’t care about the very shallow and un-complex characters. Fans of the comics are going to be disappointed because the film doesn’t come close to capturing the spirit of those stories and varies off so far that you might not even recognize the main characters. I don’t think there is enough fun in the script to keep people coming back to this film like they did with director Luc Besson’s The Fifth Element.   My Rating:  Bargain Matinee   Valerian and the City of a Thousand Planets Website

Indiefest:  The B-Side: Elsa Dorfman’s Portrait Photography  (2016)  R  Documentary about the life and work of photographer Elsa Dorfman. The subject of the film is a very colorful woman who has spent most of her life taking portraits on a giant 20x24 Polaroid camera. For those of you who aren’t old enough to know, Polaroid made cameras could instantly print a photograph, and the camera that Elsa uses is huge and prints beautiful photographs in large format. The problem with this film is most of it is spent on Elsa finding an old photograph and telling us about it while she holds it for the camera. This causes the film to drag once the novelty of the photograph wears off. It’s an interesting subject; it just should have been a shorter film.   My Rating:  Bargain Matinee   The B-Side Info

Indiefest:  Band Aid  (2017)  Ben (Adam Pally) and Anna (Zoe Lister-Jones) are a couple in trouble. They fight about everything, and the only time they seem ok is when they both are high. They are at the end of their rope until they discover that they can make songs up about their fights. Could it be through their songs that they can reconnect and find the love they once had?  I enjoyed this film because the characters are complex and real. This film is part comedy, part drama with a bit of a musical thrown in. Writer/director Lister-Jones (who also co-wrote the songs) is a delight to watch, and her chemistry is outstanding with Pally. Both characters are haunted by their failures, not only because of the miscarriage but also because their professional lives have not come even close to where they thought they would be. This is a couple who isn’t connecting anymore, and it’s bringing down their marriage. Only when they start creating music, do they reconnect and find the love that was always there. They just need a way to let go of the past and look to the future, one filled with song. My Rating:  Full Price    Band Aid Website

Forgotten Film:  Mikey and Nicky  (1976) R   In Philadelphia, a small time bookie, Mikey (Peter Falk), steals Mob money and is in hiding. A hitman is on his trail, and it’s up to his good friend, Nicky (John Cassavetes), to help his buddy escape from the hitman. I liked this movie because of its use of natural sound, so you get a real feel of the city. Falk and Cassavetes play off each other, and it’s fun to see the two up on screen together. This isn’t a great film but a fun one to watch.    My Rating:  Bargain Matinee   Mikey and Nicky Info

Weird Credits:  From the credits of Dunkirk: Weird Music Instruments

Coming Soon to a Theatre Near You:  The Trip to Spain  (2017)  Steve Coogan and Rob Brydon embark on a trip to Spain, sampling local cuisine and trying to one up each other by doing impressions of famous people. From the same people who gave us The Trip (2010) and The Trip to Italy (2014).   The Trip to Spain Website 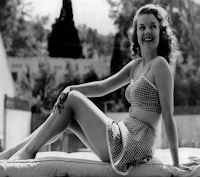 Email ThisBlogThis!Share to TwitterShare to FacebookShare to Pinterest
Labels: Band Aid, Dunkirk, The B-Side: Elsa Dorfman's Portrait Photography, The Trip to Spain, Valerian and the City of a Thousand Planets, Zoe Lister-Jones