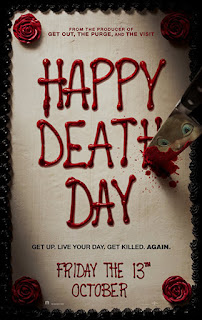 My View:  Happy Death Day  (2017)  PG-13  A college student, Tree (Jessica Rothe), keeps reliving the day of her murder. As she relives the day over and over, she starts to figure out who killed her and how to stop them.  I thoroughly enjoyed this film, which is rare for a slasher genre movie. The film has a sense of humor, making fun of the slasher device in films, as Tree is killed in about every way possible. The film has some twists and turns to keep you interested as Tree (yes that is what everyone calls her) tries to discover who the killer is. Jessica Rothe has a significant screen presence and has a knack for comedy, which helps the film feel light and fun. There are some scary moments; most of them the ‘jump out of the dark' variety but it’s the tongue in cheek humor that makes this film so much fun. It’s not a great film, but it’s enjoyable for its campy theme.   My Rating:  Bargain Matinee   Happy Death Day Website

My View:  The Foreigner  (2017)  R  An ordinary businessman, Quan (Jackie Chan), seeks justice when his daughter is killed in an act of terrorism. They messed with the wrong man as Quan has a past that will help him track down his daughter’s killers.  This is not your typical happy-go-lucky Jackie Chan roll, nor is it your typical Jackie Chan movie. The Foreigner is a grim movie about a grieving father who wants revenge on the killers who exploded a bomb in downtown London. I loved the action sequences with Chan which are fast moving and, as with any film with Jackie Chan, are full of almost impossible stunts. The problem with this film is that it wants to be a revenge film and political drama, which the two don’t mix very well up on the screen. Pierce Brosnan plays a former IRA leader who, for the past nineteen years, has been working with the English government to keep the peace. I wanted more of Jackie Chan and a whole lot less of Pierce Brosnan.  The political stuff is too slow moving and weighs down this almost 2-hour film. I would give this film a lower rating, but Jackie Chan is just too darn good at action scenes to do that.    My Rating:  Bargain Matinee   The Foreigner Website

My View:  Marshall  (2017)  PG-13   Joseph Spell (Sterling K. Brown) is accused of raping his employer, Mrs. Strubing (Kate Hudson). NAACP lawyer Thurgood Marshall (Chadwick Boseman) is sent to defend him and is forced by the court to use local lawyer Sam Friedman (Josh Gad), who typically works on insurance cases.  Chadwick Boseman is an unmovable force in this outstanding film about a man who continually challenged the system and won. This is a gripping courtroom drama, which, even though I knew the outcome, kept me on the edge of my seat. There is impressive chemistry between Boseman and Josh Gad, who plays a reluctant lawyer who comes around to Marshall’s ideas on how to run a case. The whole cast is outstanding, including Kate Hudson was the woman who filed the rape charges. This film is worth the price of admission to see Chadwick Boseman work his magic, making Thurgood Marshall come alive before our eyes.  My Rating: Full Price    Marshall Website

Indiefest:  Professor Marston and the Wonder Women  (2017)  R    The true story of psychologist William Moulton Marston (Luke Evans), who was in a polyamorous relationship between his wife (Rebecca Hall) and his mistress (Olive Byrne). Marston went on to create the legendary and controversial (for its time) comic book character Wonder Woman. This is a movie about the choices we make in our relationships, those choices that sometimes take great courage to make. This film isn’t for everyone as it contains a bit of nudity, along with some bondage. I liked Hall and Evans’ performances, but it’s Rebecca Hall who makes this film worth watching. Playing the hard-headed, opinionated, and brilliant wife, Hall dominates every scene that she is in. I think you will be shocked at Marston’s ideas that he incorporated in his creation of Wonder Woman. This is a complex, moving tale about the exploration of what love means and if it indeed can conquer all that life gives us.   My Rating:  Full Price    Professor Marston and the Wonder Women Website

Indiefest:  The King’s Choice  (2017)  In 1940, the Nazis invade Norway, who, up to that time in the war, had been neutral.  The Norwegian King (Jesper Christensen) must make the tough decision to give in to the German’s demands or fight on and lose countless lives of his own people. The film is the dramatic telling of a King who has to make a hard choice that will have far-ranging consequences. King’s Choice lets us see the workings of not only a Monarchy but how a King deals with a government that can’t come to a decision. We get to know the King’s family, including the hot-headed son, and we also meet the brave soldiers that were fighting for King and country under impossible odds. It’s an entertaining film that lets us see how war affects people, not only the powerful but also the powerless.    My Rating: Full Price    The King's Choice Website

Indiefest:  M.F.A.  (2017)  An art student, Noelle (Francesca Eastwood), gets creatively inspired when she accidentally kills the man who raped her. After her painting is well received, she decides to become a vigilante, killing men who have wronged women on campus, which fuels her creativity. This is an interesting and sometimes brutal look at a woman who becomes empowered by her revenge. The more she becomes a vigilante and rights what she perceives as wrongful acts on women, the more creative she becomes to where it becomes an obsession. Eastwood gives a robust and compelling performance, making it hard to not root for her even though she is killing men right and left. M.F.A. will leave you thinking about how to stop violence against women on college campuses  in this tale of a woman who seeks solace in revenge.  My Rating: Full Price    M.F.A.Website

Indiefest: The Meyerowitz Stories (New and Selected)   (2017)   An estranged family, two brothers and one sister gather in New York for an event celebrating their father, Harold (Dustin Hoffman), an opinionated sculptor. Danny (Adam Sandler), the oldest son, is a recently separated father whose daughter, Eliza (Grace Van Patten) is about to leave for college. Jean (Elizabeth Marvel), the troubled daughter, is an office manager, who has never gotten over her broken childhood caused by her parents' divorce. Matthew (Ben Stiller), the youngest son, is a highly successful money manager that moved to Los Angeles to get away from his family. Writer/director Noah Baumbach brings us a story about a rather strange family, led by the bullheaded and conceited father who feels he never got the success and recognition that his work deserved. Dustin Hoffman is phenomenal as the center of attention-hungry patriarch. Baumbach gives us almost non-stop dialogue where family members try to get their point in while Harold keeps talking about what he wants to chat about. Both Sandler, as the loving father and Ben Stiller, as the slick Matthew, are exceptional in their performances. While given a lesser role within the film, Elizabeth Marvel, still holds her own as the distressed Jean. Emma Thompson, as the alcoholic fourth wife of Harold, is simply superlative in the film. The film is told short stories, centering on each character of the family. This is a funny and moving film filled with eccentric, complex characters whose layers start peeling back before our eyes.   My Rating: Full Price   The Meyerowitz Stories Website

Forgotten Film:  Night Falls on Manhattan  (1996)  R  A newly elected District Attorney (Andy Garcia) finds himself in the middle of an investigation of police corruption that may involve his father (Ian Holm and his father’s police partner(James Gandolfini). This is an absorbing tale where you never know which character is telling the truth. I love James Gandolfini in the film playing the possible corrupt policeman; he is just a blast to watch to perform. It’s a dark film about the intricate workings of a city that is choking on lies and deceit.   My Rating: Full Price   Night Falls on Manhattan Info

Weird Credits:  From the credits of Happy Death Day: Mascot Mask Designed By

Coming Soon to a Theatre Near You:  The Snowman  (2017)  R  Detective Harry Hole (Michael Fassbender) gets put on the case of a woman who has disappeared, and her pink scarf is wrapped around an ominous-looking snowman. You had me at Michael Fassbender. The Snowman Website