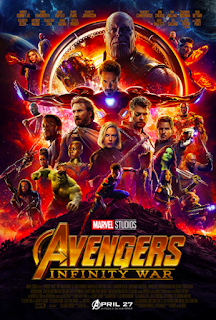 My View:  Avengers: Infinity War  (2018)  PG-13 The Avengers and their allies must risk all to defeat the mighty Thanos (Josh Brolin before he destroys the universe.  First, the film moves along at a brisk speed, which makes the film seems shorter than its 2 hours and thirty-minutes. I loved that other than focusing on the main bad guy, Thanos, the film does a great of spreading out the storyline to all the good guys, so no one dominates the film, with the exception of Thor, who steals a little bit of the thunder (pun intended) in the last third of the film. Thanos is one of the best bad guys in the Marvel universe who has a plan to kill half the world’s population. The action scenes are well done and intense, and I especially loved the dialogue when the Guardians of the Galaxy are on screen.  The director of the first two Guardians films, James Gunn, wrote the dialogue for those scenes. I will warn you that young kids may be upset because there are some superhero deaths in the film, one of which is incredibly moving. Do stay through all the credits for a bonus scene that will set up the next Avengers film.   My Rating: I Would Pay to See it Again   Avengers: Infinity War Website

Indiefest:  Lean on Pete  (2018)  R   A troubled teen named, Charley (Charlie Plummer), starts working for a cantankerous horse trainer (Steve Buscemi). Ray falls in love with a quarter horse named, Lean on Pete, that, if he doesn’t start winning, the horse will be sold.  Charlie Plummer gives a mesmerizing performance as a teen who falls in love with a horse and will do everything in his power to keep it alive. A great deal of this film is Charlie talking to the horse about his life, his loves, and his troubles. Buscemi and Plummer have great chemistry on screen, and the little heart to heart talks that they do are magical. Lean on Pete is not a film for children as there are some very adult themes in the movie, and there is one scene in particular not made for kids. Go see this small bittersweet film that has a ton of heart.  My Rating: Full Price   Lean on Pete Website

Forgotten Film:  Akira  (1988)  R  In a post-World War III era, a secret military project endangers the city of Neo-Tokyo when it turns a biker gang member into a psychopath. The city’s only hope is two teenagers who, with the help of a group of psychics, try and stop the psychopath’s rampage. The reason to see this film is the detailed animation (hand drawn) that gives this movie its super realistic look. The storyline is very adult, and there is quite a bit of grisly violence, but it’s worth checking out.  My Rating: Full Price    Akira Info

Coming Soon to a Theatre Near You: Dead Pool 2 (2018)  This is what the studio left for the synopsis of the film on IMDB which sums up their rather creative marketing campaign:  After surviving a near-fatal bovine attack, a disfigured cafeteria chef (Wade Wilson) struggles to fulfill his dream of becoming Mayberry's hottest bartender while also learning to cope with his lost sense of taste. Searching to regain his spice for life, as well as a flux capacitor, Wade must battle ninjas, the Yakuza, and a pack of sexually aggressive canines, as he journeys around the world to discover the importance of family.    Deadpool 2 Website