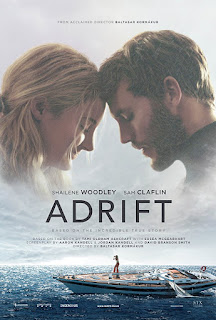 My View:  Adrift  (2018)  PG-13  A young couple, Tami (Shailene Woodley) and Richard (Sam Clafin)  who are avid sailors, head out on a small boat for the ride of a lifetime. What they don’t know is that they are about to head directly into one of the most catastrophic hurricanes in recorded history  Part romantic movie and part survival film, Adrift successfully melds the two together, mostly due to Woodley and Clafin. The movie moves back and forth, between their courtship in Tahiti, and the storm and its aftermath. Woodley and Clafin have spectacular chemistry and their characters falling in love seems real and beautiful. Woodley has to do the heavy lifting for the wake of the storm, and as usual, Woodley is masterful in her performance. Shot in Tahiti and New Zealand, the landscapes are spectacular, and the storm sequence is riveting. There are some nice twists and turns along the way, and the film moves at a quick pace. You are going to enjoy this film, going on an adventure of a lifetime with Tami and Richard.   My Rating: Full Price   Adrift Website

In Case You Missed It (A Film Just Released on BlueRay and DVD):  Red Sparrow  (2018)  R  Ballerina Dominika Egorova (Jennifer Lawrence) is injured in a freak accident. Her dancing career is over, and she is forced to join the “Sparrow School,’ a Russian intelligence service where she is forced to use her body as a weapon. Her first mission is to seduce an American CIA agent (Joel Edgerton). When the mission starts to unravel, it just might threaten the security of both countries. If you think you are going to see something like last year’s Atomic Blonde, you aren’t. While a violent film with a couple of very hard to watch torture scenes, this is more of a movie about the psychology of breaking people down to become someone who will do anything for their country. The film is too long (two hours, twenty minutes), and the storyline, while it has some nice twists and turns, is too slow. Lawrence doesn’t do a Russian accent well, to the point that it just gets distracting. While Atomic Blonde was a blast to watch, I was either revolted at the torture or bored by the countless talking head scenes. I did enjoy the all too brief part that Mary-Louise Parker has as a wisecracking chief of staff of the American Embassy. She breathed life into the film, but her role was too short to save this film.   My Rating: Cable   Red Sparrow Facebook Page

In Memory of Ed Wood (A Movie I've Only Seen in Trailers but Just Looks Like a Bad Idea):  Uncle Drew  (2018)  PG-13  After draining his life savings, Dax (Lil Rel Howery) enters a team in streetball tournament, then he loses his star players to a rival (Nick Kroll).  Dax stumbles across a legendary streetball player, Uncle Drew (Kyrie Irving) and convinces Uncle Drew to assemble his legendary streetball team and join Dax’s squad for the tourney.  All have to tell you is that Shaq is in this film to let you know how bad it’s going to be based on Shaq’s past films (Kazamm, Steel).   Uncle Drew Website

Forgotten Film:  The Descent  (2005)  R  A caving expedition goes horribly wrong as six women become lost inside a previously unexplored cave. Trapped in the cave, they desperately try to find a way out as a strange breed of predators pursues them. This little-seen horror film was one of the best movies of 2005. The film builds the tension almost from the start, and there are some first-rate performances. I will warn you that this film is very gruesome and rather graphic, but if you are looking for a horror film, you can't do better than this one.  My Rating: Full Price    The Descent Info

Weird Credits:  From the credits of Adrift:  Tattoo Builder

Coming Soon to a Theatre Near You:  Don’t Worry, He Won’t Get Far on Foot (2018)  R  John Callahan (Joaquin Phoenix) has been in a horrific car accident and is permanently confined to a wheelchair.  On his journey to sobriety, he uses his mangled hands to draw hilarious, often controversial cartoons, which gives him a new lease on life.   Don't Worry Facebook Page