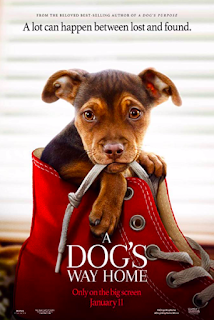 Family Faire:  A Dog’s Way Home  (2019) PG    A dog is separated from its owner and travels over 400 miles to find him. I enjoyed this family-friendly film that caused me to tear up several times. I really like Bryce Dallas Howard as the voice of the dog Bella. She hits all the right notes with her portrayal of Bella’s voice. The dog is adorable, and I love the fact that Bella is a pit bull, a dog that if raised right is sweet and loving. What I loved about this film is the humor, as it is told from the viewpoint of the dog. Bella sees most things as a game and gives them names, like 'Stop chewing on the shoes' game. There was a couple of out and out laughs and a lot of chuckles from the audience that I saw it with.  I would caution that there are a couple of scenes with coyotes threating Bella that might be really scary for really young kids.   My Rating: Bargain Matinee   A Dog's Way Home Website

My View:  The Upside  (2017)  PG-13  A wealthy man (Bryan Cranston) with quadriplegia hires a man (Kevin Hart) with a criminal record to be his assistant. A friendship develops between the two men that will change both their worlds.  Unfortunately, this movie doesn't come close to matching the intelligence and warmth of the original film that this film is based on, the 2011 French film The Intouchables. The Upside is too simplistic in its ideas about race and friendship. Its plot is highly predictable, and its biggest flaw is the performance of Kevin Hart. Hart can't help but overact, continually mugging for the camera, when a lighter touch is needed for this part. I can't help thinking what someone like Idris Elba or Mahershala Ali could have done with this part.    My Rating: Cable    The Upside Website

My View:  Replicas  (2018) PG-13  A scientist (Keanu Reeves) becomes obsessed with finding a way to bring back his family after a fatal accident. Well, after seeing this film, I now know why it wasn't shown to critics. With plot holes the size of Puerto Rico (that's where the movie takes place) and an ending that is just so stupid, Replicas is already on my worst films of the year list. It tries to do a twist at the two-thirds part of the film, but it doesn't even close to succeeding. I question making Keanu Reeves a cutting edge scientist, but then I remember that Reeves production company is responsible for this mess of a film. Even if you a Keanu Reeves fan, stay at home and wait for John Wick III to come out.  My Rating: You Would Have to Pay Me to See it Again   Replicas Website

In Case You Missed It (A movie just released on DVD/Blu-Ray): Mid90s  (2018)  R   Stevie (Sunny Suljic) lives in a troubled home in 90s L.A. with a mother (Katherine Waterston) that is never there, and an older brother Ian (Lucas Hedges) that takes out his frustrations on Stevie. Stevie’s life changes when he finds new friends at the Motor Avenue Skate Shop. This is a film that is not for everyone. There are some disturbing scenes involving Stevie drinking, smoking, doing drugs and even having sex. Also, there is a ton of cursing, some of it done by Stevie, who looks much younger than his age. There is also quite a bit of violence, most of which is committed by Ian on Stevie. The film does have some humorous scenes and at times is quite enjoyable, but it’s hard to overlook the sex scene where an older teenage girl seduces Stevie at a party. I will say this that Sunny Suljic gives an incredible performance as the kid who just wants to fit in with his idols, the skateboarders. Written and directed by Jonah Hill and shot on 16mm film, Mid90s captures that time-period so well that at times I thought I was watching a documentary.   My Rating: Bargain Matinee    Mid90s Website

In Memory of Ed Wood (A Movie I've Only Seen in Trailers but Just Looks Like a Bad Idea):  The Sex Trip (2017)  A womanizer refuses a kiss from a homeless woman and then wakes up in a woman’s body. It’s not a good thing when the only cast member you recognize is Frank Stallone.    The Sex Trip Info

Forgotten Film:  Pawn Sacrifice  (2014)  PG-13  Set during the Cold War, a brilliant but troubled young man, Bobby Fisher (Toby Maguire) takes on the Soviet Union and their Grand Master chess player, Boris Spassky (Liev Schreiber). While the script is a little clunky, the performances of Schreiber and Maguire are fabulous to watch. If you play chess, you will want to see this film that gets the art of playing down perfectly.  My Rating: Bargain Matinee    Pawn Sacrifice Infor

Weird Credits:  From the credits of A Dog’s Way Home:  Cat Trainer

Coming Soon to a Theatre Near You:  Isn’t It Romantic  (2019) PG-13  A young woman (Rebel Wilson), down on love and hating romantic comedies, hits her head and passes out. When she wakes up, she is in an alternate universe and is in her own romantic comedy. I have high hopes for this as the trailer looks really good and I love Rebel Wilson.    Isn't It Romantic Facebook Page 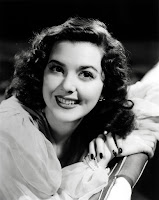