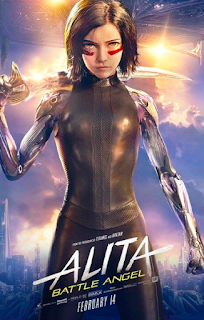 My View:  Alita: Battle Angel  (2019)  PG-13  In the distant future, a man (Christoph Waltz) finds a deactivated female cyborg (Rosa Salazar) and repairs her. He treats her as his daughter but she doesn’t remember her life before she was deactivated. She goes on a quest to find out just who she was. The CGI in this film is impressive and well done. The action sequences are amazing and the choreography of the action sequences are amazing. The problem with this film is that they put way too much into the plot. There are way too many sub-plots in this film, that make the film feel slow and cumbersome. I did like Rosa Salazar’s performance but she can’t overcome the script (co-written by James Cameron).   My Rating: Bargain Matinee    Alita: Battle Angel Website

My View:  Isn’t It Romantic  (2019)  PG-13  A young woman (Rebel Wilson), down on love and hating romantic comedies, hits her head and passes out. When she wakes up, she is in an alternate universe and is in her own romantic comedy. Go see this hilarious movie, especially if you are a fan, like I am, of rom-coms. I laughed throughout this film and there are a couple of amazing reoccurring jokes that are really funny. This is not the normal Rebel Wilson part, she is much softer in her performance. Adam Devine is perfect as her best friend and Liam Hemsworth is great as the love interest. There are even a couple of song and dance numbers in the film. The director, Todd Strauss Schulson, watched 65 rom-com films before making this one and so you see bits and pieces from a lot of your favorite films. I can’t recommend this delightful film more.  My Rating:  Full Price    Isn't It Romantic Facebook Page

My View:  Arctic  (2018)  PG-13  A man (Mads Mikkelsen) is stranded in the Arctic after a plane crash. After months of surviving the tough environment, he must decide to stay or embark on a possibly deadly trek through unknown territory. I was cold watching this film so you might want to bring a jacket to the theatre when you see this film. A great performance by Mads Mikkelsen makes this film so watchable. The film is almost a silent film as Mads says very little throughout the film. The film is beautifully shot and the editing is top notch. The story moves along at a nice pace and this tale of adventure and survival is exciting and moving.   My Rating: Full Price    Arctic Website

Indiefest:  Never Look Away  (2018)  German artist Kurt Barnert (Tom Schilling) has escaped East Germany and he now lives in West Germany. He continues to be tormented by his childhood under the Nazi’s and the East German government. The film follows the adventures of Tom from his childhood during WW II to his art career in his 30’s.  First I will warn you that this movie is a little over three hours long but it worth seeing. Tom Schilling is dazzling as the artist who feels repressed by his East German communist government. I loved Paula Beer as the headstrong fashion major who falls for Kurt and supports his efforts to become an artist. The film’s cinematography is gorgeous and worthy of its Academy Award nomination for Cinematography. This is a deeply moving film that shows us just how important art is in the world.    My Rating: I Would Pay to See it Again    Never Look Away Website

My View:  Happy Death Day 2U  (2019)  PG-13  Tree (Jessica Rothe) has experienced this before, she is reliving the same day over and over as she and her friends are being killed. I loved the first film, which I thought was funny and fun. I liked the first Happy Death Day, which I thought was fun because of all the ways Tree died and it had a sense of humor to it. Unfortunately, this storyline of this film isn’t quite as much fun, though there are a couple of scenes where Tree kills herself that are funny. It also isn’t a scary as the first one and it tries too hard to hit the heartstrings. Overall, a disappointment. Note that there is a bonus scene after the first end credits that set up the third movie in the series.   My Rating: Cable    Happy Death Day 2U Website

Forgotten Film:  The Pink Panther  (1963)  Sir Charles Litton (David Niven) is a jewel thief known as ‘The Phantom.’  He goes to a deluxe Alpine resort under the guise of a vacation, but he is really there to steal a jewel known as ‘The Pink Panther’ which is owned by a princess (Claudia Cardinale). On the Phantom’s trail for years, a bungling policeman named Inspector Clouseau (Peter Sellers). It may surprise you that the film isn’t about Clouseau, its main character is The Phantom but Peter Sellers is so great and funny in the Inspector role that he steals the film. Probably the best film in the Pink Panther series, mostly because all the other films in the series went overboard on the silliness.  My Rating: Full Price    The Pink Panther Info

Coming Soon to a Theatre Near You:  Captain Marvel  (2019)  PG-13  Carol Danvers (Brie Larson) becomes one of the universe’s most powerful heroes and she will need that power when Earth is caught in the middle of a battle between to alien races.  You had me at Brie Larson!     Captain Marvel Website 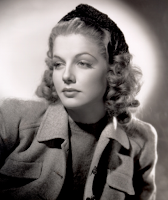