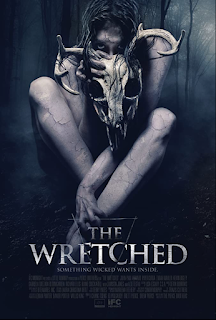 My View: The Wretched (2019)  Ben (John-Paul Howard), a rebellious teenage boy who is struggling to deal with his parents' separation. Ben believes that somehow the family next door is responsible for the missing children in a town that is hiding secrets. Ben learns that the woman next door isn’t your ordinary neighbor; she is a thousand-year-old witch that has the ability to live beneath the skin of her victims. I really enjoyed this horror film which has just the right amount of scares to make it worth a watch. The plot is a little familiar, with a troubled teen who no one thinks is telling the truth until it is too late, but the film has some nice twists and turns that make the film keep the tension going. I liked Howard as Ben, who becomes obsessed with the creepy next-door neighbors. There is some excellent chemistry between Howard and Piper Curda, who plays Mallory, a teen girl who works at Ben’s father's business. The special effects, though on a small scale, are well done, and the witch is quite horrific. This film is much better than a lot of horror films of the past few years with twice the budget. In the mood for a late-night scare? This film might just fit the bill.   My Rating: Bargain Matinee   The Wretched Facebook Page    Available for rent on participating on-demand services and is currently playing at drive-in theatres around the country.

Indiefest: Bull (2019)   In a rundown subdivision near Houston, a troubled teen, Kris (Amber Havard) breaks into a neighbor’s house, an aging bullfighter, Abe (Rob Morgan), who has seen his better days in the rodeo. Abe decides to take Kris under his wing, and their relationship will change both their lives forever. Bull is a low-key but excellent film about small-town living in Texas and the people struggling to make it in the world. I loved the look into the world of the small rodeos and the people that make it their world. Rob Morgan gives a multi-layer performance of a man who has lived a hard life but a life that he loves. Amber Havard provides us with an insight into a young woman who is just looking for someone to help guide her into making better decisions and not follow into the footsteps of her mother, who she can only see when she visits her in prison. Kris doesn’t make the right decisions, and Abe isn’t always the best person to be her surrogate father, but by the end of the film, you get the idea that they will be good for each other.   My Rating: Full Price    Bull Website     Available for rent on participating on-demand services.

My View: The Half of It (2020)  PG-13  Ellie Chu (Leah Lewis) is smart, so smart that she makes needed cash doing school work for other students. Ellie gets an unusual assignment; Paul (Daniel Diemer) wants Ellie to write love notes for him to give to Aster (Alexxis Lemire), the most popular girl in school. Ellie’s notes begin to work when Ellie realizes that she may have gotten in over her head and might be creating a surprising love triangle. This is a beautiful and funny take on the old Cyrano de Bergerac tale as things get a bit complicated and messy. I loved the cast of this film, and Leah Lewis stands out as the headstrong Ellie, who has taken care of her father since her mother suddenly died when she was thirteen. Lewis is perfect in the role, as Ellie, the studious misfit, falls slowly in love from afar with Aster as she writes love notes and, of course, texts for Paul as he attempts to date Aster. Writer/director Alice Wu, who gave us the delightful 2004 film Saving Face, has a great ear for dialogue, making her characters feel real and easy to root for. I loved the ending of the film and would welcome an update on the characters in a few years to see how things worked out for the trio.   My Rating: Full Price     The Half of It Website  Currently available on Netflix.

Indiefest: A Secret Love (2020)  A documentary on the love story between Terry Donahue and Pat Henschel. Terry played in the women’s professional baseball league, which inspired the classic movie A League of Their Own. The film tells Terry and Pat’s story, who had to keep their relationship under wraps for most of their lives. The documentary is a sweet and sometimes sad story about two women that hid their love for each other from not only the outside world but also their families as well. There are some great behind the scene pictures and plenty of home movies that make this film feel very personal. The couple is proud of Terry’s baseball career, where she was quite a player. The phrase ‘There is no crying in baseball’ shows up from time to time in their wardrobe. I will warn you that the film centers around the fact that the couple is getting up in years, and family/friends begin pressuring the couple to move out of their house and into a managed facility. The couple holds out as long as they can, and quite a few tears are shed as they finally have to make the move. The film gives us what it was like for two women who were in a loving and committed relationship that they felt they couldn’t share with the world until now.  My Rating; Full Price    A Secret Love Website   Currently available on Netflix.

Indiefest: Circus of Books (2019) In 1976, Karen and Barry Mason were struggling to make money. Barry happened to see an ad for a magazine salesman, and before you know it, the couple had an adult bookstore in Los Angeles that became a national icon and at one time, was the largest distributor of gay porn in the US. I saw this film at the Out of Film Festival here in Atlanta and had a blast watching it with an audience that couldn’t stop laughing at and with the Mason’s. The couple raised a ton of kids, all of who didn’t know their parents were in the porn business. The bookstore in the 70s and 80s was the place for gays to meet (and hookup, sometimes out in the alley in the back), and the Mason’s, though very conservative, kept their politics out of their bookstore. In fact, during the AIDS crisis, they kept employees that became stricken on the payroll, even when they were on their deathbeds. The film is funny and touching, especially as the couple finally decides that the bookstore has had its day, and it is time to close it down. You will have a great time with the Mason’s and their delightful and unusual little bookstore.   My Rating: Full Price    Circus of Books Website    Currently available on Netflix.

Forgotten Film: Castle in the Sky (1986) PG   A young boy, Pazu, comes across a mysterious girl named Sheeta, who somehow floats down from the sky. The girl is being chased by not only pirates but also an army and secret agents. Pazu and Sheeta go on an adventure to search for Sheet’s identity in a floating castle in the sky. If you have never experienced the magic of animator Hayao Miyazaki, then this is the film for you. The story is fun and adventurous with a touch of sci-fi and even a little steampunk added in. Castle in the Sky is an adventure that you and your kids will fall in love with, a film that will be a part of your family's favorite movies.   My Rating: I Would Pay to See it Again    Castle in the Sky Info

Weird Credits:  From the credits of The Half of It: Vocal Contractor

Coming Soon to a Screen Near You: The Lovebirds (2020) R   A couple (Issa Rae and Kumail Nanjiani) are accused of a murder and now have to clear their name. Will they and their relationship survive the night? This film is from the same director, Michael Showalter that teamed up with Kumail Nanjiani to give us the 2017 film The Big Sick, so I’m there!    The Lovebirds Info

Email ThisBlogThis!Share to TwitterShare to FacebookShare to Pinterest
Labels: A Secret Love, Bull, Castle in the Sky, Circus of Books, Kumail Nanjiani, Rob Morgan, The Half of It, The Lovebirds, The Wretched