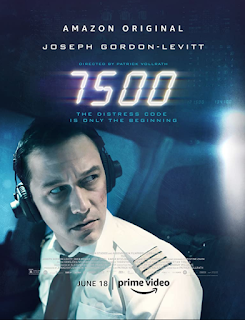 My View: 7500 (2019) R   A young pilot, Tobias (Joseph Gordon Levitt) is faced with a horrible situation, the passenger plane he is flying is being hijacked by terrorists. I immensely enjoyed this taut, suspenseful film that takes place entirely inside the cockpit of the airplane. Levitt gives a tour de force performance as the young pilot who has to make some tough and sometimes horrible decisions to keep his plane and passengers safe. He is on screen the whole movie, and he is up to the challenge, showing a multi-level performance making us care about him and wanting him to figure a way out. 7500 is a roller coaster of tension as Tobias deals with not only the terrorists but having to fly the plane as well. I highly recommend this film as it does a difficult job of making such a confined space into such a theatre of suspense.    My Rating: Full Price     7500 Website   The film is available on the Amazon website.

My View:  Miss Juneteenth (2020)   A former beauty queen and single mom, Turquoise (Nicole Beharie), who dreams that her daughter, Kai (Alexis Chikaeze), will win the ‘Miss Juneteenth’ scholarship pageant and go to college. I loved this story of a strong-willed mom who wants a better life for her daughter than the one that she is living. Beharie gives a powerful performance of a woman who keeps getting kicked down, but by sheer willpower is determined that her daughter will succeed where Turquoise failed. There is excellent chemistry between Bahaire and Alexis Chikaeze, and that makes the heart of the story work so well, as the love between mother and daughter shines throughout the film. I enjoyed the sense of pride and community, and how much the Juneteenth holiday meant to the town. The film captures the feel of a small, Texas town and how important local businesses, like the bar Turquoise works in, are, giving people a place to gather and get together. Miss Juneteenth is a warm, intimate look at a woman who wants a better life for her daughter. A mother that will do what she has to do, no matter the obstacle, for her daughter to succeed in life.   My Rating: Full Price    Miss Juneteenth Website    Available for rent on participating on-demand services and in participating drive-in theatres.

Indiefest: My Darling Vivian (2020)   Documentary on Vivian Liberto, Johnny Cash’s first wife and the mother of his four daughters. The film is narrated by Vivian’s four daughters, including Country superstar Rosanne Cash, which contains numerous behind-the-scenes home movies, giving the viewer an inside look into the life of the Cash family. The Cash daughters bring us the story of their mother, who was mostly forgotten by the fans and the industry after Johnny left Vivian for June Carter, a story we know well from the Oscar-winning 2005 film Walk the Line. We get to see how much Vivian influenced Johnny in both his music and his life, but fame and pills took Johnny away from Vivian, a strong woman who raised four children with almost no help from the ‘Man in Black.’ My Darling Vivian is a must-see for Cash fans, and yes, it might tarnish his image a bit, but it is Vivian’s time to be in the spotlight that she so deserves. My Rating: Full Price     My Darling Vivian Website   Available for rent on participating on-demand services.

Indiefest: Babyteeth (2019)   A seriously ill teenager named Milla (Eliza Scanlen) falls for a parent's worst nightmare, a small-time drug dealer, Moses (Toby Wallace). Milla’s new love gives her the freedom to find things to be joyous about and to take chances on life. Babyteeth isn’t an easy film to watch because Milla and her parents (Essie Davis, Ben Mendelsohn) don’t always make the right decision; in fact, most of the time, they make the wrong one. Including Moses, these are all incredibly flawed people, but that is the point of this film. That throughout all their mistakes and bad choices, they are a family that is dealing with Milla and her fight to live. Milla, through the help and love of Moses, learns to live her life on her terms and the world be damned. All four principle actors give outstanding performances, with Scanlen giving us a meaningful and heartfelt performance that dominates the film. Davis and Mendelsohn are fabulous as the parents who learn to cope with their problems through the love and intersection of their daughter. This isn’t your ordinary cancer kid film, and that is what makes it stand out: it shows how a family deals with life and all its pain and warts.    My Rating: I Would Pay to See it Again    Babyteeth Website    Available for rent on participating on-demand services.

Indiefest: Runner (2019)   Documentary on Guor Marial, who at age eight fled war-torn Sudan to eventually seek safety in the US. He became a nationally known runner and qualified for the 2012 Olympics. Guor wanted to run for the newly formed South Sudan, but because it was not recognized by the Olympic Committee, he had to fight to run as an independent, not as a member of the Sudan team, taking a stand against its years of oppression. You are going to fall in love with Guor Marial (later Guor Marial Marker) has his unbelievable story is told on the screen. Guor had to literals run for his life (not once but several times) as he was sent by his mother and father out into the wilderness to escape the war that was raging in Sudan. I loved the animation the film uses to illustrate Guor’s life in Sudan, and the trials and tribulations that he had to endure to survive. It is a remarkable story of just how he got to America, but then it gets even better when coaches at his high school realize that he had a talent for running. That talent not only took him to college but also the Olympics. The film does an outstanding job of giving us all the insight and troubles that Guor had in his life, including a massive obstacle for him to get into the Olympics. It is a film that will have you cheering for the lone runner from South Sudan.   My Rating: Full Price    Runner Website   Available for rent on participating on-demand services.

Indiefest: Jack and Yaya (2019)   Jack and Yaya met when they were toddlers through their shared backyard fence. They spent their childhood together, and both supported each other as they both came out as transgender. The film follows the two for a year as they reunite after moving away from each other, exploring their unique relationship with the help of home videos and interviews with their friends and family. This sweet slice of life film explores the lives of two people, by happenstance, gives us an insight into the world of transgender people, their lives, loves, and how both they and their families dealt with the transition for becoming who they were meant to be. Because of the support system that both Jack and Yaya had, we see two people that have ended up being happy with the lives they created for themselves.   My Rating: Bargain Matinee    Jack & Yaya Website    Available for rent on participating on-demand services.

Forgotten Film: Dressed to Kill (1980) R After visiting her psychiatrist (Michael Caine) and talking about her deepest fantasies, a woman (Angie Dickinson) is picked up by a mysterious man at an art museum, and they go back to his apartment to have sex. When the woman leaves, she is brutally killed by a tall blonde woman in an elevator. A high-class call girl (Nancy Allen) has witnessed the killing and now is the next target for the killer. For me, the film is worth watching for the first ten minutes of the film, as we follow Dickinson through her fantasy-filled day. Writer/director Brian DePalma (Carrie, The Untouchables) has always been an Alfred Hitchcock fan, and this is his tribute to the great master. The film is filled with some excellent performances, including Nancy Allen, Angie Dickinson (who’s sex scene was the talk of the town), and Dennis Franz as the investigating detective. The film lets us down a little with its ending, but Dressed to Kill is still an intense, fun thriller of a ride.    My Rating: Full Price   Dressed to Kill Info

Weird Credits: From the credits of 7500: Previz Artist

Coming Soon to a Screen Near You: The Ghost of Peter Sellers (2018)   In 1973, Peter Sellers was the biggest comedy actors of his time, and he embarked on a comedy for Columbia Pictures. Sellers, notoriously temperamental and difficult to work with, lost confidence in the film and got the producers of the film fired. Sellers then turned on his friend, Peter Medak, who was directing the film, and the scars left from this production are still there after all these years. I have a love/hate relationship with Peter Sellers and can’t wait to revisit this complex man.     The Ghost of Peter Sellers Website