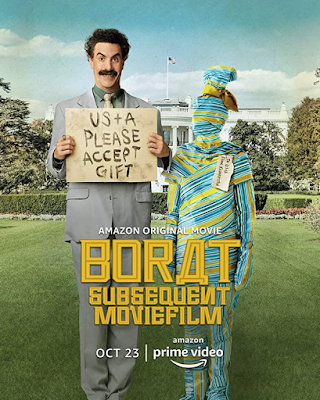 My View:   Borat Subsequent Moviefilm (2020) R   Our favorite Kazakh television journalist Borat (Sacha Baron Cohen) is back as he travels around the country in disguise as an attempt to blend in with the American public after believing he is popular due to the first film. Borat is on a mission to give a gift to Vice President Pence, Borat’s own daughter Tutar (Maria Bakalova). I enjoyed the first film, especially when Borat fooled politicians and officials into interviews that often were hilarious and uncomfortable. This time around, there is a bit more of a story as Borat is trying to train his long-lost daughter, Tutar, to become worthy of being a gift for the Vice President. Maria Bakalova absolutely steals this movie and is the reason to watch it. Her comic timing is equal to Cohen, and at times, she outshines Cohen, taking the spotlight from him and his Borat character (something I thought might be impossible). Now, this is a raunchy and bawdy film, filled with Cohen’s sense of humor that pushes the boundaries of good taste far beyond what many comics would do. Unlike the first film, I didn’t always believe the people that Cohen was interacting with didn’t know who he was, and that often made the situations a bit slow and forced. That being said, I was surprised how much I enjoyed this film, mostly due to the blooming relationship between Borat and Tutar. And yes, there is a big scam near the end of the movie with a famous politician that has to be seen to believed. This Borat film isn’t for everyone, but as a fan of the first film, I did enjoy my travels with Borat and Tutar. Just remember that if you encounter Borat out on the streets of your town, try and keep your social distance and maybe wear a mask or two.   My Rating: Full Price    Borat Subsequent Moviefilm Website   Available on the Amazon Prime platform.

Indiefest: Friendsgiving (2020) R   Molly (Malin Akerman) and Abbey (Kat Dennings) host Thanksgiving that is meant to be a small affair and turns into a whole slew of close friends and acquaintances making a dinner that becomes more and more bizarre, dysfunctional, and comical as the day goes on. Besides Akerman and Dennings, the cast includes Aisha Tyler, Jane Seymour, Chelsea Peretti, Wanda Sykes, Margaret Cho, and Ryan Hansen. Friendsgiving is one of those films that on paper was a good idea but once filmed, it never got off the ground. It is very obvious a good deal of the dialogue is improvised, and while Dennings and Aisha Tyler shine, most of the rest of the cast has a hard time creating anything remotely funny. Too many gags are weak, and often, just when you think the film is starting to pick up steam, a bit brings the movie to a screeching halt. Even the outtakes that are shown during the credits don’t work. It's a get-together that I can do without.   My Rating: Cable     Friendsgiving Info    The film is currently playing in select theatres and available for rent on participating on-demand services.

My View: Rebecca (2020) PG-13   A young newlywed (Lily James), after a whirlwind romance, arrives at Manderley, her husband’s (Armie Hammer) imposing family estate on the English coast. Soon after she arrives, the bride realizes that the estate is haunted by the legacy of her husband's dead first wife, Rebecca. When you remake a classic, you must bring something new to the screen, otherwise why not just watch the original. I am telling you right now, skip this film and go back and watch Hitchcock’s Rebecca, which won seven Academy Awards and made Joan Fontaine a star. What the 1940 film has that this modern version doesn’t? How about a lack of suspense and style? This version does a horrible job of building tension, making us feel sorry for Lilly James’s character, but we never feel like she is in any danger. Hammer’s Maxim de Winter comes across as not a tortured soul who mourns his beloved Rebecca. Instead, he comes off as just a jerk who thinks he can make things up to his wife with a cuddle in bed. Kristin Scott Thomas never captures the evil that her character must have under the surface, but we never get the menacing undercurrent that is needed to be there. Hitchcock’s film left us with a final scene that is shocking and scary; this Rebecca leaves us with a whimper.   My Rating: Cable     Rebecca Website  Available on the Netflix platform and is currently playing in select theatres.

My View: The Witches (2020) PG   In 1967, in the rural Alabama town of Demopolis, a young orphaned boy (Jahzir Kadeen Bruno) goes to live with his Grandma (Octavia Spencer). There they discover that the town is filled with witches. Grandma takes the boy to a seaside resort, only to find out that the world’s Grand High Witch (Anne Hathaway) has gathered her fellow witches from around the globe to carry out her nefarious plans. First, I must warn parents that very young children may find the witch characters quite scary, with their sharp teeth filled incredibly wide mouths and claws for hands. The film starts promising, with a great introduction to the witches when the young boy encounters one at a store. The film loses its way when the boy and his grandmother go to the hotel, slowing down to a crawl as we learn that the Grand High Witch has plans to turn all children into mice. The sad thing is that they didn’t give Octavia Spencer anything to do in a role that she could have played in her sleep. I was bored with the storyline, and Hathaway going way overboard in her portrayal of a villain just doesn’t work. The ending feels rushed, and the CGI looks like a throwback to a 90s film. By the end of the film, I didn’t care what happened to the kids or the witch; I was just ready for it to end.   My Rating: Bargain Matinee    The Witches Website    Available on the HBO Max platform. 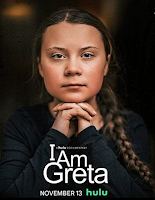 Indiefest: I Am Greta (2020)   Documentary about the teenage claimed activist Greta Thunberg who captivated the world with her global crusade to get people to listen to scientists about the environmental problems that confront the world. I enjoyed this film, which looks at how a 15-year-old girl went from sitting outside a government building in Sweden by herself to speaking at the UN with the world watching. Greta is one determined young woman who believes deeply in what she preaches that governments worldwide have talked a big game but have done very little to help the environment, and she isn’t going to put up with it any longer. The film follows Greta on a year-long quest to call attention to climate change, but the film fails to fully explore Greta’s home life and as well-meaning her parents are (her father is shown as a loving and caring parent), the immense pressure that has been put on a teenager that is on the autism spectrum. I came away from the film admiring Greta and her passion to change the world, but I was left a feeling that I never quite got to know her.   My Rating: Bargain Matinee      I Am Greta Website    In select theatres now including Landmark Midtown Art Cinema in Atlanta and available on the Hulu platform starting Nov. 13th.

Forgotten Film:  The Short Game  (2013) PG   The World Championship of Junior Golf brings 1500 young golfers from 54 different countries to compete in a tourney that will crown the next possible “Tiger Woods.”  This entertaining film follows 8 young golfers, ages 7 and 8, from around the world, in their quest to win the championship.  Some of the kids are adorable, including little Sky Sudberry, who is a tiny little girl with a big heart, and Zamokuhle Nxasanna, a roly-poly kid from South Africa, who is just there to make friends, play as well as he can and have fun.  There are a couple of kids that you sort of root against, including Alan Kournikova, the brother of tennis star Anna, who is the epitome of the rich, stuck up kid who thinks he’s God’s gift to golf (and he maybe, since he is that good), and Amari “Tigress” Avery, who is coddled by her dad and has temper tantrums on the course when she hits a bad shot.  This is a must for any golfer, though throughout the film,  you will say to yourself “Man, why can’t I hit the ball like that?”    My Rating: Full Price     The Short Game Info

Weird Credits: From the credits of The Witches: Drapesmaster

Coming Soon to a Screen Near You: Nomadland (2020) R   After her company town is devastated by the economic recession, Fern (Frances McDormand) packs up her possessions in her van and sets off on the road to take a journey through the American West, living as a modern-day nomad. The film has been winning a ton of awards on the film festival circuit and is a sure Oscar contender.      Nomadland Info