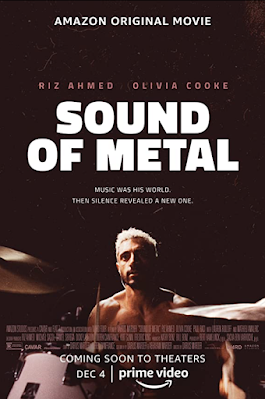 My View:   Sound of Metal (2019) R  A heavy-metal drummer, Ruben (Riz Ahmed), life is changed when he begins to lose his hearing, and he thinks that his life and music career are over. With the help of his band and his girlfriend (Olivia Cooke), Ruben checks into a secluded sober house for the deaf in hopes it will prevent a relapse with heroin and help him adapt to his new world. What would happen if you had something taken away from you that you loved doing? How would you handle it? That is what Sound of Metal explores. Ruben is happy, touring in a band with his girlfriend, Lou. They live in a motor home where Ruben makes smoothies and puts on jazz records to wake Lou up. It's all good, and because of Lou, Ruben has been clean and sober for four years. Then Ruben suddenly loses his hearing, learning that he will never hear properly again. Fearing for his life and his sobriety, Lou persuades Ruben to go to a sober house for the deaf, and now Ruben has to figure out how to live in this world of silence. Riz Ahmed gives a brilliant and moving performance as the troubled Ruben. It’s stunning how good Ahmed is, how he can convey so much by doing so little. The tension slowly builds as we wonder if Ahmed will adapt and accept his new life or is he going to rebel and go down a terrifying rabbit hole. Ahmed gives one of the best performances of the year, and the storyline does not disappoint as it treats him and his fellow sober housemates with dignity and lets you in to see them working on themselves and each other. The ending of this film will have you thinking about Sound of Metal for a long time to come.   My Rating: I Would Pay to See it Again   Sound of Metal Website    The film is currently playing in select theatres and available on the Amazon Prime on Dec. 4th.

Indiefest: The Last Vermeer (2019) R   During World War II, Joseph Piller (Claes Bang) was fighting in the Resistance while Han van Meegeren (Guy Pearce) was hosting parties and selling Dutch art treasures to the Nazis. Now that the war is over, the two men cross each other's path as Piller is investigating war crimes and van Meegeren has been accused of collaboration. As Piller investigates, he becomes convinced that van Meegeren is innocent and tries to save his life. I enjoyed this mystery that turns into a bit of a courtroom drama. Guy Pearce is the reason to see this film as his performance as the outlandish and flamboyant Han van Meegeren is a sight to be seen. With his mop of hair and his eyebrows turned up at an angle, Pearce is a force on the screen as he commands us to watch him weave his magic. After wars, people must justify how they acted, and van Meegeren is no different. Did he do what he is accused of? Did he do it for the money and fame? We will probably never know the full truth. The amazing bit about this story is that it is based on actual events, and that makes for a good story.    My Rating: Full Price   The Last Vermeer Website      The film is currently playing in select theatres.

Indiefest: Dating Amber (2020)   Eddie (Fionn O’Shea) is gay but is afraid that his parents and classmates will find out. Amber (Lola Petticrew) is a loner with an attitude. The two decide the only way they will survive their last year of school is to pretend that they are in a straight relationship. I loved this movie, which is a new take on the coming of age, romantic comedy film. O’Shea and Petticrew are hilarious together, as two start up a friendship that begins with necessity but ends with a meaningful and deep relationship. Set in Ireland in the 90s, the fashion and music is fun, and the situations the two characters get into seem real and have emotional pull. Both Eddie and Amber don’t want to disappoint their parents. Eddie’s parents are on the verge of splitting up, and Eddie’s dad (Barry Ward) wants his son to follow in his footsteps and join the Army. Amber is dealing with her mom is dealing with a tragedy in her past. Amber has accepted her homosexuality and is planning to escape to London as soon as she graduates. Eddie is deep in the closet, resigned to the fact that he will join the Army, even if it kills him. The film moves at a quick pace, and I was surprised by how emotional the ending was for me. Dating Amber is a wonderful film full of funny and sweet moments, with two characters that you will want to spend time with and root for.    My Rating: Full Price    Dating Amber Website   Available for rent on participating on-demand services.

Indiefest: Born to Be (2019)   The documentary follows the work of Dr. Jess Ting at the groundbreaking Mount Sinai Center for Transgender Medicine and Surgery in New York City. The film follows the doctor as his work impacts his patients' lives while he becomes a pioneering gender-affirming surgeon. This is an emotional and sensitive film on how one doctor is almost single handily changing the lives of men and women who have longed to physically be what they have always mentally seen themselves. We follow Dr. Ting as his practice grows, so much so that by the end of the film, he has a waiting list just to be considered for the surgery. We get an inside look at how complex the decision is to have this type of surgery and its toll on the psychological makeup of the patients who are getting the work done. We see what a great man Dr. Ting is as he treats each person with compassion and respect, wanting only to change how his patients feel about themselves. Born to Be brings the world of transgender to the front and lets us see and feel how it is to accept who you are.   My Rating: Full Price    Born to Be Website   The film is currently playing in select theatres and is available to rent on participating on-demand services.

Indiefest: Crazy, Not Insane (2020)   This documentary examines the research by forensic psychiatrist Dorothy Onto Lewis, a pioneer in the study of the psychology of murderers and serial killers. Fans of the ‘true crime’ genre will love this film about controversial forensic psychiatrist Dorothy Lewis's life and work. The film goes through Dr. Lewis's career as she looks at her past case files, including video and audiotapes. Dr. Lewis has been at the forefront of diagnosing people with multiple personalities and how those personalities can cause some to commit murder. Dr. Lewis is a feisty woman with a rich sense of humor, who isn’t afraid to speak her mind (she has a great showdown with Bill O’Reilly over what the definition of evil is), and she has many people in her field that don’t believe in multiple personalities. The film even brings out the star of ‘true crime,’ serial killer Ted Bundy, who gave Dr. Lewis his last interview with. I think by the end of Crazy, Not Insane, you will be either on Dr. Lewis's side, or you won’t believe in her theories, but you won’t be able to say that this film didn’t entertain you.   My Rating: Full Price     Crazy, Not Insane Website    Available on the HBO platform.

Forgotten Film: Beauty Is Embarrassing (2011)   This is a funny and fascinating documentary about the extraordinary life of artist and performer Wayne White. Wayne grew up in the Tennessee mountains and, after graduating college, moved to New York City. There he got a job designing sets and puppets on the first season of the Saturday morning TV show, Pee-wee’s Playhouse. He was the creative force behind the legendary music videos, Peter Gabriel’s "Big Time" and The Smashing Pumpkins' "Tonight, Tonight." He also branched out as an artist of paintings and sculptures. White is a fascinating man, and the film does an exceptional job capturing his humor and energy in a movie about a highly creative man.   My Rating: Full Price    Beauty is Embarrassing Info

Weird Credits: From the credits of The Last Vermeer: Lead Matchmover

Coming Soon to a Screen Near You: The Loss Adjuster (2020)   Martin (Luke Goss) is having a bad day. His wife Angie (Kym Marsh) Leaves him for another man one week before Christmas. His job as an insurance loss adjuster is hard, especially when you deal with a flirtatious widow, a corrupt Doctor, and a dead rat, all while trying to do your job. The world seems to be set against Martin, but thanks to a few new friends and a bit of Christmas magic, life might turn out for the better. This looks like a film to get us in the mood for the holidays.    The Loss Adjuster Website

Email ThisBlogThis!Share to TwitterShare to FacebookShare to Pinterest
Labels: Beauty is Embarrassing, Born to Be, Crazy Not Insane, Dating Amber, Luke Goss, Riz Ahmed, Sound of Metal, The Last Vermeer, The Loss Adjuster