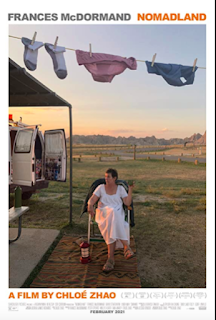 Indiefest: Nomadland (2020) R   After her company town is devastated by the economic recession, Fern (Frances McDormand) packs up her possessions in her van and sets off on the road to take a journey through the American west, living as a modern-day nomad. The first thing that stood out was the outstanding cinematography as Fern travels across America and its vast and changing landscape. Fern is a modern-day explorer, one who would rather be on the road, sleeping in her beloved van, than inside a house on a plush bed because no matter how comfortable that bed is, it’s not her home; the road is. Set in the aftereffects of the 2008 housing collapse, Fern is not alone on the road, and one of the great things about this film is the characters that she encounters and befriends. Some, she only meets once, but others keep popping up, making Fern feel a part of something big, something that she explores as the film goes along. Nomadland is a quiet movie, and McDormand, with her expressive face, gives us a moving performance from a woman who spends a great deal of her time alone. There is tension throughout the film because we, along with Fern, are very aware of how dangerous it is for anyone on a road trip by themselves, but the film seems to let us, and Fern know that help is just down the road. It’s a road that Fern will likely go down until the end.   My Rating; I Would Pay to See it Again    Nomadland Website   The film is currently playing in select theatres and is available on the Hulu Platform.

My View: I Care a Lot (2020) R   Marla (Rosamund Pike) has a nice racket going; she becomes the legal guardian of the elderly and then drains their savings as she puts them in nursing homes. Marla has just picked the wrong woman, Jennifer Peterson (Dianne Wiest), to swindle. Marla is a force to be reckoned with, taking what she feels is hers, no matter who or what is in her way. Rosamund Pike is having fun playing such a fearless and ruthless role, blowing out smoke from her vape like a dragon as she bullies and plots her way to success. Marla has created a great little racket and is enjoying the spoils of her labors when she thinks she has discovered a pot of gold in old Mrs. Peterson. Little does Marla know that Mrs. Peterson has friends in powerful places, like Roman (Peter Dinklage), a man with a short temper, and the money and guns to back that temper up. I Care a Lot is a blast to watch as you wonder who is going to win this match of guts and wits between two people who are used to getting what they want, no matter who or what they run over to get it. Pike takes you down a road, with her finely cut hair and her gleaming smile, that you don’t know where it’s going, but you know there are going to be some bodies lying by that road when she is done.    My Rating: Full Price   I Care a Lot Website  The film is available on the Netflix platform.

Indiefest: Blithe Spirit (2020) PG-13   Charles (Dan Stevens) is a writer suffering horrible writer’s block. He decides to invite a spiritualist medium (Judi Dench) to hold a seance to get the writing juices flowing again. Unfortunately, for both Charles and his wife of five years, Ruth (Isla Fisher), the Medium brings back Charles's first wife, Elvira (Leslie Mann), and she won’t or can’t leave Charles's side, even if only he can see her. This is a remake of a classic film, and when you do that, you try to bring something fresh to the story. Unfortunately, this film brings nothing new; in fact, it takes the storyline and makes such a mess of it that I never quite could figure out who I was supposed to root for, Charles, his new wife, or the wife that died and has come back as a ghost. The problem is that by the end of the film, you don’t like any of them, and worse yet, you don’t care what happens to them. Even such a great actor as Judi Dench playing the lovesick Medium can’t save this film.    My Rating: Cable    Blithe Spirit Website  The film is currently playing in select theatres.

Familyfaire:  Flora & Ulysses  (2021)  PG   Flora (Matilda Lawler), the daughter of George (Ben Schwartz), a comic book creator, and Phyllis (Alyson Hannigan), a romance writer, is upset about her parent’s separation. When Flora rescues a squirrel from a robot lawnmower, she discovers that the squirrel, she has named Ulysses, has developed magical superpowers. Now can Ulysses help bring Flora’s parents back together before the evil animal control officer (Danny Pudi) catches Ulysses? This is a light, fun film for the family to enjoy. Ulysses is pretty darn cute, and the idea that a squirrel can be a superhero is a great plot point. The film is silly but in the right way, and Matilda Lawler is delightful as the spunky, determined young girl who is convinced that Ulysses will save the day. Sit back and enjoy the adventures of Flora and Ulysses as they save the day or, at least, save the cheese-balls.   My Rating: Bargain Matinee    Flora & Ulysses Info   The film is available on the Disney+ platform.

Indiefest: Test Pattern (2019)   The film follows an interracial couple (Will Brill, Brittany S. Hall) whose relationship is put to the test after being sexually assaulted, and her boyfriend drives her from hospital to hospital to get someone to administer a rape kit. This is a heartbreaking tale of whether a relationship, no matter how strong, can survive with so many obstacles are laid in their path. The film handles a bunch of subjects, including racism and how we see and treat victims of sexual assault while taking us on a frustrating and painful journey. I loved the editing of this film and its use of music and, at times, unrelenting silence to hammer into us the desperation and loneliness that the two characters experience as this journey goes on.   My Rating: Full Price    Test Pattern Website   The film is available to rent on participating on-demand services.

Indiefest: Days of the Bagnold Summer (2019)   Daniel (Earl Cave), a heavy-metal teenager, wanted to spend his summer with his dad in Florida, but instead, he is stuck, once again in England, with his mom, Sue (Monica Doland), a mild-mannered librarian. There isn’t a lot to this film, which is fine because the two leads are so much to watch. Sue, is a single mom that loves her son but wants him to be happy like he was when he was young. Daniel is sullen and depressed, wanting to be left alone to listen to his heavy-metal music in his room. His world has come crashing down because his father, who left them when Daniel was eight, has reminded his invite for Daniel to visit him in the states. Monica Doland is magical as the dumpy but lovable mom who tries to look on the bright side of things, something so hard when you have a son who tends to look at life as one, long dark passage of time. Not a lot happens to the characters in this film, just enough for there to be an understanding in the end that no matter what happens, they have each other.    My Rating: Full Price   Days of the Bagnold Summer Info   The film is available to rent on participating on-demand services.

Forgotten Film: Alice in the Cities (1974)   From the creative mind of Wim Wenders comes a wonderful film about friendship and lost lives. Philip (Rüdiger Vogler) is a German journalist who wants to return to Germany after a failed writing stint in the US. He meets Alice (Yella Rottländer) and her mother at the airport, also looking to go back to Germany. Alice is left with Philip temporarily, but it soon becomes apparent that Philip will have to take responsibility for Alice. After returning to Europe, the two travel through European cities on a quest to find Alice’s relatives. Highlighted by incredible black-and-white cinematography and moving performances by the two leads, the film is an exploration of how a friendship can develop over time. The film is a wondrous time capsule of America and Europe's contrasts in the 70s and a road-trip film that you constantly wonder if this will end happily.    My Take: Full Price   Alice in the Cities Info

Weird Credits: From the credits of Blithe Spirit: Skipper

Coming Soon to a Screen Near You: Godzilla vs. Kong (2021) PG-13 Two of the icons of monster movies are going to battle against each other; the massive, mighty Kong and the fearsome monster Godzilla. Who will win, and will the human race survive this battle?    Godzilla vs. Kong Website