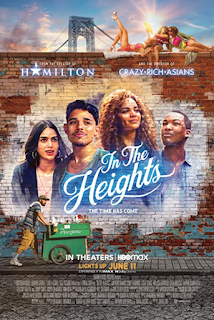 My View: In the Heights  (2021)  PG-13   Usnavi (Anthony Ramos) lives in the neighborhood of Washington Heights, just on the northern tip of Manhattan. Usnavi owns a bodega and dreams of winning the lottery and escaping to the shores of his native Dominican Republic. Nina (Leslie Grace) has come back home from college with some upsetting news for her parents. Life is hard, but with help from friends in the Heights, you can survive. It's hard to take the magic and energy of a live stage performance and put it on the screen successfully, but the team of Lin-Manuel Miranda, Quiara Alegria Hudes, and Jon M. Chu have done a fantastic job with a film that will have you dancing in the aisles. Anthony Ramos is brilliant as the storyteller/bodega owner who dreams of opening his grandfather’s place back in the Dominican Republic. Full of energy and charisma, it’s a magical performance that carries this film along. Leslie Grace, as Nia, is perfect as a girl who feels she doesn’t fit in with the West Coast college life and wants to come back home. Melissa Barrera has a beautiful voice and is mesmerizing as the love of Usnavi’s life, a woman who dreams of becoming a fashion designer and moving out of the neighborhood. The music is fantastic, the dance sequences are fun and exciting, including one done on the rooftops of the neighborhood, and the songs are so good you may, like the audience I saw it with, clap out loud at the end of the big musical numbers. Please don’t wait to see In the Heights at home, go and experience it like I did, in a theatre where the music and the spectacle can overwhelm you. And be sure to stay through all the credits, there is a bonus scene you don't want to miss.   My Rating: I Would Pay to See it Again   In the Heights Website  Now playing in select theatres and on the HBO Max platform.

Familyfaire: Wish Dragon  (2021)  PG   Din (voiced by Jimmy Wong) is a delivery boy who longs for a better life and to meet up with his long-lost childhood friend, Lina (voiced by Natasha Liu Bordizzo). Din finds a teapot containing an all-powerful dragon named Long (John Cho), who can grant wishes. Can Long grant Din his wish to be reunited with his long-lost love Lina? This is a well-done, funny retelling of the genie and the lamp tale. All Din wants is to reunite with his childhood friend. All Long wants is for Din to hurry up and make his three wishes so that he can end his curse and go off to heaven. John Cho, voicing the dragon Long, is hilarious as he discovers the wonders of the modern world, all the while trying to get Din to hurry up and make his three wishes. The story is a joy to watch and has a few small twists and turns that, while a little predictable, still make the storyline move along at a brisk pace. The animation is colorful, and there is enough action and adventure to keep little ones involved. By the way, they made this in China and recorded a version in Mandarin with legendary action star Jackie Chan as the voice of Long the dragon.    My Rating: Full Price    Wish Dragon Website  Now playing on the Netflix platform.

Indiefest: Queen Bees   (2021)  PG-13   After a fire at her home, Helen (Ellen Burstyn) is temporally moved into a senior’s home, where she encounters a group of mean-spirited women led by Janet (Jane Curtin). Helen decides to make the best of a bad situation and meet the clique head-on while being romanced by a dashing new resident (James Cann). I had high hopes for this film with a cast that includes my childhood crush Ann-Margret, Jane Curtin, and Christopher Lloyd. Unfortunately, the cast is wasted on a script that never delivers. The plot is razor-thin, with plot twists that you can see coming, even without your glasses and dialogue that is so clunky, you might wish for hearing aids so you can turn them off. Burstyn gives everything she’s got but is let down by a plot that would be rejected by some of those Hallmark cable channel knock-off movies. Queen Bees a warmhearted movie with good intentions that just can’t seem to find any way out of a lousy script.   My Rating: Cable    Queen Bees Website  Now playing in select theatres and is available for rent on participating on-demand services. 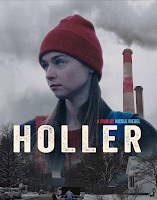 Indiefest: Holler   (2020)  R   Ruth (Jessica Barden) has gotten a way out of her small, dying Southern Ohio town; she has been accepted to college. She joins a scrap metal crew with her brother, Hank (Austin Amelio), to pay her way to college. The two work the dangerous job of the scrap metal crew during the day and then break into abandoned factories at night to steal valuable metal. Ruth soon finds that the ultimate cost of an education may be more than she bargained for, and she will have to choose between that promising future and the family she will have to leave behind. I loved this film because of the spellbinding performance of Jessica Barden as the headstrong, smart young woman who wants more out of life than her small town can offer her but is torn by the love of her brother and how he has done everything for her. The film is bleak, with a town being destroyed by the factories that keep closing and the drugs that its townspeople turn to for an escape. Barden is captivating on-screen, and we root for her right from the start, even when she breaks the law because we know that it’s the only choice she has. This is a film about loyalty and family and how the choices we make can have lasting ramifications for our future. Holler is a film that will cause you to fall in love with Ruth and then break your heart when she makes decisions that she feels are right, even though we know they are wrong. Barden’s performance will stay with you long after you have finished your journey with Ruth and her family.   My Rating: Full Price     Holler Website   Now playing in select theatres and is available for rent on participating on-demand services.

Indiefest: Censor  (2021)   Enid (Niamh Algar) spends her days as a film censor, watching gore-filled movies and decided what should be taken out. Enid is assigned a film from the archive that echoes her hazy childhood, one where her sister disappeared so long ago. This is a movie that would be perfect to see at a midnight showing at a film festival or a drive-in, the ideal places to see a shock and scare horror film. The film takes place in 80s Britain when movies being released on video were subject to being heavily edited or outright banned. Enid is a prim, lonely woman who is haunted by her past. Enid was a child when her sister went missing and does not remember what happened. When Enid watches a horror film that seemingly mirrors her sister's disappearance, she begins a deep, dark dive into the world of horror films. I loved the look of this film, with its bland colors and almost murky look, where a walk a night for Enid is as scary as the horror films that she watches every day for work. If you are a fan of horror films, Censor is a film to watch as Enid tries to find out what happened to her sister and discovers that reality sometimes does mirror film.    My Rating: Full Price    Holler Website   Now playing in select theatres and is available for rent on participating on-demand services on June 18th.

Forgotten Film: Stuck Between Stations   (2011)  R   Casper (Sam Rosen) is on leave from the Army and is about to return to Afghanistan. Rebecca (Zoe Lister-Jones) is a grad student who has messed up her life with bad relationship after bad relationship. Casper has always thought about the girl he had a crush on in high school, and they meet a decade later by chance in a bar. They will spend an evening together touring the nightlife of Minneapolis and maybe change their thinking about life and each other. I love the performances in this film, especially Zoe Lister-Jones as the grad student who perhaps is too smart for her own good. Stuck Between Stations is one of those small indie films that never got the attention it deserved.   My Rating: Full Price    Stuck Between Stations Info

Weird Credits: From the credits of In the Heights: Environmental Stewards

Coming Soon to a Screen Near You:   Ron’s Gone Wrong   (2021)  Barney (voiced by Jack Dylan Grazer) is an awkward middle-schooler who just wants to fit in. He is given a Bot, a new walking, talking, digitally connected device meant to be your best friend. The problem is right from the start, Barney’s Bot, named Ron, is defective. Can Ron and Barney still be friends? The trailer looks like this will be a lot of fun, highlighted by the fact that Zach Galifianakis voices Ron.   Ron's Gone Wrong Info