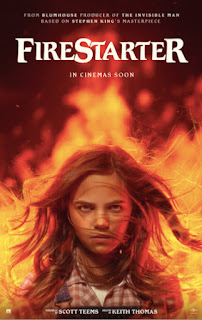 My View: Firestarter (2022) R   As a result of a secret government experiment, a young girl, Charlie (Ryan Kiera Armstrong), has gained the power to start fires with her mind. Subsequently, Charlie is now being hunted by a group named The Shop, but Charlie isn’t going without a fight. It’s sad when the only positive thing you can say about a movie is that the film's score was enjoyable (by Halloween director John Carpenter, no less). The 1984 film starring Drew Barrymore and a host of early 80s icons (with a rare motion picture appearance by Heather Locklear) was a lousy film, and this remake doesn’t improve on the storyline one bit. The plot is pretty much the same (there are a few changes to try to update it) that don’t make any difference to us caring about any character in the film. Ryan Kiera Armstrong does, from time to time, looks a little like Barrymore, but that doesn’t help her center a picture where we don’t care if little Charlie gets found or not. The bad guys of the film, Gloria Reuben as the Captain (of what, I don’t know) who chews up the scenery at a regular interval and Michael Greyeyes, as a mysterious bounty hunter who kills without any plan, are toothless and not at all scary. Firestarter is supposed to be a horror film, but it comes off as even more boring than the original film, which was, I thought, impossible. There is a reason why the studio did not give film critics a screening and only offered screener access after it had premiered on the Peacock platform. I would light a fire to burn this film to the ground, but I am all out of lighter fluid, much like the film.  My Rating: You Would Have to Pay Me to See it Again    Firestarter Website  Now playing in theatres nationwide and on the Peacock platform. 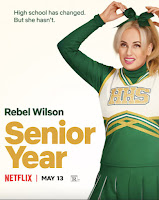 My View:  Senior Year  (2022) R   Stephanie (Rebel Wilson) is a high-school student who, after a cheerleading accident, is left in a coma for 20 years. Now she is awake and ready to return for her senior year of high school…as a 37-year-old. I like Rebel Wilson, and as a side-kick in films like Pitch Perfect and JoJo Rabbit, she has been hilarious and scene-stealing. As a lead actress in such duds as Isn’t It Romantic and The Hustle, she hasn’t shown that she can handle the main spotlight. After taking a few years off to remake herself, now comes Senior Year. Unfortunately, Wilson has picked a film that is dull and unfunny right from the start. The film continually mines the ‘fish out of water’ premise, constantly bringing up horrible references to what was essential to teens 20 years ago with lines about MTV videos or mistaking Lady Gaga for Madonna. The film feels every bit of its hour and fifty-minute runtime taking forever to get going with the plot and running some jokes into the ground(like the fact that the high school is constantly making sure no one is offended by anything, including positive message cheers). I had high hopes when I saw the trailer, but now, I wish that Stephanie had stayed in the coma a bit longer for the writers to work on the script.    My Rating: Cable   Senior Year Website  Now playing on the Netflix platform.

Indiefest: Happening (2022) R   Anne (Anamaria Vartolomel), a student in 1963 France, is about to finish her studies when she finds out that she is pregnant. Consequently, she decides to abort the baby against the law and goes on a journey to do so in a society that censures women’s rights and desires. I won’t lie to you; this is a tough film to watch as we follow Anne through the weeks of her pregnancy that she is desperate to end with some scenes that will be upsetting to watch. This is a painful and sometimes very graphic and chilling story about a woman who can’t see her future with a baby in tow and finds that everyone, including her friends, abandon her in her time of need. Anamaria Vartolomel is mesmerizing as Anne, letting us see her every emotion on her face, even when trying to be stoic or lying (especially in her moments with her unsuspecting mother). Truly a painful and full of despair look at the plight of a woman whose society has put up so many obstacles to overcome that it seems to be doomed from the start. Happening is an amazing movie that will be talked about for a long time and maybe, just maybe, open some hearts and minds to this complex issue. My Rating: I Would Pay to See it Again Happening Website   Now playing in select theatres.

My View: Operation Mincemeat (2022) PG-13   In order to try and fool Germany during WWII about the planned Allied invasion of Sicily, a group of intelligence officers come up with a plan to take a deceased man, dress him up as an officer, and place fake plans about an alternate invasion and place him via submarine on the coast where German soldiers can find him. This is based on an incredible true story that saved countless Allied lives by tricking the Germans into thinking Greece was the next invasion target instead of Sicily. The plan is a fantastic bit of deception that worked only because of the brilliance of the people who planned it and then kept working on it, even when others doubted it would succeed. I loved the secondary story of Colin Firth’s character, Ewen Montagu, a married man whose marriage is in trouble and starts working with a brilliant and funny woman, played perfectly by Kelly Macdonald, who is attracted to the dashing Ewen. I also loved that Ian Fleming, the creator of the iconic James Bond books, is a character in the film that always seems to be in the right place at the right time to collect material for his future books. Operation Mincemeat is a spy film where the main spy is a dead man, a remarkable tale about a group of people who created one of the greatest spy tricks of all time.   My Rating: Full Price     Operation Mincemeat Website  Now playing on the Netflix platform.

Indiefest:  Monstrous  (2022)  PG-13   Laura (Christina Ricci), traumatized and fleeing from an abusive relationship, who takes her 7-year-old son, Cody (Santino Barnard), to a remote house in the woods. The two should be safe; however, there is something in the pond, a bigger, more terrifying monster than an ex-husband. This is a fun little horror movie that is bolstered by the performance of Christina Ricci and the 1950s setting. Ricci plays a woman who has taken her son to an isolated home in a small town. Her son begins saying that a monster is in the pond and is coming for him. Laura thinks, at first, that Cody is just scared, settling into a new environment, but Laura starts experiencing troubling feelings and sights herself. Like many fifties horror films, there is the conflict of thinking that everything is good and safe in a small town, but as always, there is something evil lurking behind the petticoats and the commercials for dishwashers built with the housewife in mind.   My Rating: Bargain Matinee   Monstrous Website  Now playing in select theatres and On Demand.

Forgotten Film: A Month in the Country (1987) PG   In the summer of 1919, a battle-scarred veteran, Tom (Colin Firth), comes to a small village to work on restoring a mural that is believed to be hidden inside the thick walls of a medieval era church. While working on finding and repairing the mural, Tom befriends a fellow vet, John (Kenneth Branagh), an archeologist working on a dig nearby. The two develop a friendship, and the two friends begin a long road to recovery with the help of their work, the village, and a vicar’s wife (Natasha Richardson). A Month in the Country is an enjoyable movie about healing and coming to terms with the past. Very early in their careers, the three stars show why they all went on to make their mark on cinema.   My Rating: Full Price   A Month in the Country Info

Weird Credits: From the credits of Firestarter: Fire Stunt Safety

Coming Soon to a Screen Near You: Where the Crawdads Sing (2022)   Kya (Daisy Edgar-Jones) is an outsider in her community. Kya is called the ‘Marsh Girl’ by the locals since she was abandoned in the marshlands of North Carolina and raised herself to adulthood. Kya begins to explore outside the world of her marsh when a young man she has befriended is found dead and is immediately cast by the community as the main suspect. Now Kay’s life will be under the microscope, and many secrets of the marsh are about to be revealed. Based on the best-selling book by Delia Owens and an up-and-coming star in Daisy Edgar-Jones (Normal People), this has the makings of a really cool movie to see this summer.     Where the Crawdads Sing Website 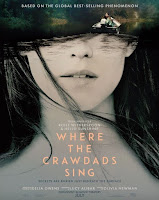