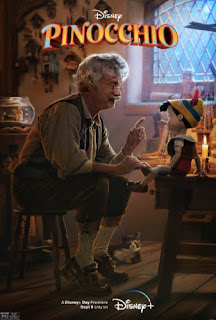 Familyfaire: Pinocchio (2022) PG   The beloved tale of the wooden puppet who goes on an adventure to become a real boy. Why does this story keep being made by studios? I probably put Pinocchio near the bottom of the list of all the classic Disney animated films. Other than the signature song “When You Wish Upon a Star” and “An Actor’s Life for Me” (hey, I was a kid actor’), nothing else really stands out for me. Well, now you have a combination of CGI animation and live action that doesn’t feel magical. Tom Hanks is horribly miscast as the puppet builder Geppetto, with an accent that comes and goes, along with one horrible song about his dead son. And who thought it would be funny to have Pinocchio have a lengthy encounter with a pile of horse manure on his first day in the real world? I think small kids will enjoy the antics of Pinocchio, and Wish Upon is wonderfully sung by Cynthia Erivo as the Blue Fairy, plus Joseph Gordon-Levitt has a certain charm as Jiminy Cricket (though Cliff Edwards will always be the standard). However, I felt the whole 1-hour forty-five-minute length as the story drags on and on. My suggestion is to watch the first 15 minutes of the film, look for all the Easter eggs in Geppetto’s workshop and pick out a movie to see from one of those.   My Rating: Cable  Pinocchio Website  Now playing on the Disney+ platform.

My View: Barbarian (2022) R  A woman (Georgian Campbell) rents an Airbnb to find that someone else is already renting it. Subsequently, she reluctantly stays the night, only to find that the home has hidden secrets that could cost her more than the rent. First, if you can, avoid the trailer. The less you know coming into this film, the better. It is scary as heck, with a great setup and an even better 2nd half (though I have a few minor problems with the ending that I won’t go into here). I love the casting of Bill Skarsgard as Keith, the guy who has rented the home also, and agrees to let Tess (Georgian Campbell) spend the night, with him taking the couch. I won’t ruin how Justin Long’s character AJ is involved in the plot, but he is perfect in the role as the vain actor whose life is about to go downhill. There are plenty of scares, and the tension building starts almost from the start of Tess showing up in the middle of a dark, rainy night and goes from there. Once you think you have it figured out, this is one of those films that comes out of left field and knocks you on your butt. If you like terrifying movies that keep you guessing, then Barbarian is one for you. One of the best horror films of the year!   My Rating: Full Price  Barbarian Website  Now playing in select theatres.

My View: End of the Road (2022) R   Brenda (Queen Latifah), her brother Reggie (Ludacris), and Brenda’s two kids are on a cross-country trip. In an isolated motel, they witness a murder. Thereafter, they become the killer's target, and Brenda will have to fight to keep her family alive. Watching this film reminded me of the old movie of the week TV films that used to be a staple on ABC and other networks in the 70s. A film that doesn’t promise a lot, led by a TV star (which is what Queen Latifah has become with her CBS Equalizer show), and gives a simple story of a family in the wrong place at the wrong time that goes from bad to worse for them. The plot is pretty easy to figure out, and there are a few fights (nothing much to see), plus a rather run-of-the-mill car chase. If you are a fan of The Equalizer, you might enjoy this, but for the rest of us, it’s like it's 1977 all over again, and I'm watching TV with my parents. My Rating: Bargain Matinee  End of the Road Website  Now playing on the Netflix platform.

Indiefest: About Fate (2022) R  A tale of two people (Emma Roberts, Thomas Mann) who have always believed in love but have never been able to find its true meaning. A chance encounter puts them together, and the two go on an adventure that will change their lives. Finally, they just might find out what love truly is. This is a fun, sweet rom-com with your usual kooky situations where two people meant for each other find themselves together due to fate. Roberts and Mann make a cute couple and have great chemistry together. The two get into some fun situations, and I liked the understated ending. It helps that the supporting cast is full of people you are comfortable with, like Wendie Malick, Cheryl Hines, and Britt Robertson. About Fate probably won’t be a staple in your rom-com lineup, but for a fun and enjoyable time, it will do. My Rating: Bargain Matinee    About Fate Website  Now playing in theatres nationwide.

Indiefest: Private Desert (2021)  Daniel is a policeman suspended after a violent incident, and his world is crashing down around him. Daniel holds onto the one good thing in his life, his online girlfriend, Sara. When Sara disappears, Daniel travels 2000 miles to find a woman he has never met. Daniel, played by Antonio Saboia, is a man whose world is coming apart. He has done something so horrible to get suspended that news stories keep popping up on the Internet. Daniel takes care of his elderly dad, who is barely coherent and has a rocky relationship with his sister, who he depends on to help take care of his dad. Daniel’s one shining hope is his relationship with Sara, but when she ghosts him, he can’t take it and leaves to find her. Private Desert is a tale about a man who thinks he is in love with a woman he barely knows but is convinced that everything will be better if he finds her. Sometimes what we think will fix things makes things only more complicated.   My Rating: Full Price   Private Desert Website  Now playing in select theatres.

Forgotten Film: Walking and Talking (1996) R  Amelia (Catherine Keener) is a single woman with a history of picking the wrong guy. Amelia has a best friend in Laura (Anne Heche), who has always been there for her, in person or any time Amelia calls. However, recently, Laura has been head over heels in love with her boyfriend (Todd Field), and now, Amelia feels she is losing Laura when Laura gets engaged. I love this film, primarily due to the performance of Catherine Keener, who plays Amelia as a likable but incredibly needy, flaky person that you somehow still like. The dialogue is perfect in this film, and it’s helped by the believable relationship between the two best friends. I will always love Anne Heche, but Keener overshadows her and shines in this one.   My Rating: Full Price   Walking and Talking Info

Weird Credits: From the credits of Barbarian: Cleaner

Coming Soon to a Screen Near You: Moonage Daydream (2022) PG-13  Documentary about the life and artistry of David Bowie. The film has been sanctioned by the Bowie estate and is by Oscar-nominated filmmaker Brett Morgen (Jane (2017), Cobain: Montage of Heck (2015), and The Kid Stays in the Picture (2002)). I can’t wait to see this film. I never saw Bowie doing his own songs, but I did see him play keyboard/backing vocals for Iggy Pop a million years ago in my youth.   Moonage Daydream Info  Film will be releasing in theatres in mid-September. 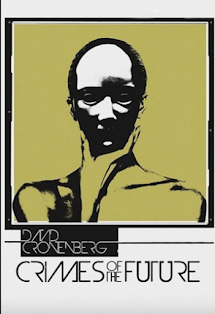