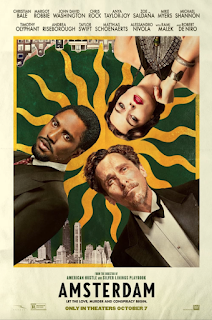 My View: Amsterdam (2022) R  Set in the tough times after WWI, three friends (Christian Bale, John David Washington, Margot Robbie) witness a murder. They become suspects and, in the attempt to clear their names, uncover one of the most outrageous plots in American History. For a film that boasts 3 Academy Award winners (Christian Bale, Rami Malek, Robert De Niro) and three Oscar nominees (Michael Shannon, Margot Robbie, and writer/director David O. Russell), you would have thought this would be a film for the ages. However, it's a bit of a mess, an enjoyable mess, but still a mess. Based very loosely (and that’s being kind) on a true story, the film tries to show us that history has a way of repeating itself. With a cast this big, it’s hard to stand out, but I must say that Margot Robbie tends to dominate every scene she is in, in a good way. Robbie plays a nurse who gets involved with two soldiers during WWI as they are both recovering from injuries. They become great friends and pledge to always have each other's back, in good times and bad. Fast forward, and the two former soldiers (Bale, Washington) are set up to look like they have murdered a woman. What the two discover is a plot that could have far-reaching consequences, and oh, by the way, that nurse is involved in some way too. Russel seems to have tried to give every actor in this impressive cast something significant to do, that there is the problem. The film gets bogged down in letting every cast member have a moment in the sun. Now, is it worth seeing? Yes, just because everyone looks to be having a great time, including Christian Bale as the soldier who now tries to help his fellow vets, sometimes in unconventional ways. Amsterdam is a film that could have used a few more rewrites and maybe a few less scenes. Disappointing but still watchable.   My Rating: Bargain Matinee  Amsterdam Website  Now playing in theatres nationwide.

My View: Luckiest Girl Alive (2022) R   Ani (Mila Kunis) has everything going for her, with a great job and a wedding just around the corner. Despite appearances, Ani is harboring a secret. Something in her past could threaten everything she has worked for. It could all unravel before her eyes. When I first started watching this film, I thought it might be going down the horror angle because we constantly see Ani either having flashbacks to some sort of traumatic event or she fantasizes about knives (either bloody ones or her stabbing somebodies hand). However, the film is about dealing with trauma and how people reinvent themselves to deal with their past. In Ani’s case, she is someone who has figured out how to play the rich, even though she isn’t. I think this is the case of where a book (a NY Times best-seller) is probably better left as the written word. The film does a horrible job with the traumatic events that Ani suffers, showing us in too graphic detail what she went through, making those scenes feel like we are a voguer looking on and not someone sympathetic to Ani’s plight. I can’t fault Mila Kunis for the mistakes of the film, as she gives us another one of her multifaceted performances, playing a woman who is sharp, witty, and trying to deal with her ugly past. I just wish the script (written by Jessica Knoll, who also wrote the book) and the director would have taken a more sensitive approach to the subject and not made it feel like another night of watching a true-crime story on TV.   My Rating: Bargain Matinee   Luckiest Girl Alive Website  Now playing on the Netflix platform.

My View: Hellraiser (2022) R  A young woman named Riley (Odessa Z’zion) is struggling with addiction, and she comes into possession of an ancient puzzle box. Riley is unaware that if she solves the puzzle, she will unleash an evil that could destroy her and everyone around her. The original Hellraiser came out in 1987 when slasher films with bad guys like Michael and Freddie ruled the horror landscape. Hellraiser was different because the bad guys weren’t some troubled, wronged man from the past but some sort of explorers. Clive Barker, who wrote the book that he then turned into the film, created one of the iconic looking horror icons of all time, Pinhead. I like horror films, and that film was a new take, though an incredibly bloody one, and was worthy of joining the hallowed halls of past scary movies. After numerous sequels, this is a relaunch of the series, and it doesn’t work. The film takes too long to get going, and other than Riley, we don’t care about the people the evil box is targeting. I found that Hellraiser wasn’t scary, just gory, and it never gave me the chills I wanted. Fans of the original, I think, will be disappointed in the new ‘Pinhead’ and its world of blood and guts.   My Rating: Cable  Hellraiser Website  Now playing on the Hulu platform. 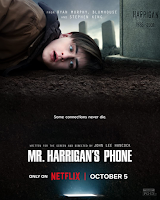 My View: Mr. Harrigan’s Phone (2022) PG-13  Craig (Jaeden Martell) befriends an older man named Mr. Harrigan (Donald Sutherland). When Mr. Harrigan dies, Craig has Mr. Harrigan’s phone in his procession. Soon after, Craig is beaten up by a classmate, and Craig calls Mr. Harrigan’s phone just to vent. Then people start dying, and Craig thinks he knows how and why. Based on a Steven King novella, I liked this film, though if you are looking for a movie to scare you, this isn’t one. It reminded me a bit of the Ray Bradbury story Something Wicked This Way Comes, in how the two main characters bond over their love of books and the stories they tell. Craig is a kid who tries to keep a low profile in school, but there is a bully (Cyrus Arnold) who delights in tormenting Craig. When Craig asks Mr. Harrigan how he dealt with bullies, he tells Craig ‘Harshly.’ A foreboding line if there ever was one. Though I was disappointed that it wasn’t scary, I enjoyed this film due to the chemistry between Jaeden Martell and Donald Sutherland, whose character, Mr. Harrigan, reluctantly and slowly takes Craig under his wing. After Mr. Harrigan dies (spoiler alert, not really, the poster has Craig lying on Mr. Harrigan’s grave), things get weird, and the film loses a bit of the momentum it had earlier. Still, Mr. Harrigan's Phone is an enjoyable film about a young man wishing for things that maybe he shouldn’t wish for.  My Rating: Bargain Matinee    Mr. Harrigan's Phone Website  Now playing on the Netflix platform.
Family Faire:  Lyle, Lyle, Crocodile  (2022)  PG  Lyle the Crocodile (voiced by Shawn Mendes) lives in New York City. He grew up under the care of a wannabe entertainer, Hector P. Valenti (Javier Bardem). After Hector has to get out of town, Lyle is left with the Primm family, helping out with chores and taking the Primm’s young son, Josh (Winslow Fegley), under his wing or should I say, stumpy arm. However, not everyone is happy with Lyle living in the city, and Lyle’s neighbor, Mr. Grumps (Brett Gelman), feels Lyle belongs in a zoo. Lyle will do his best to prove to Mr. Grumps that he isn’t as bad as others might think. This is a fun and charming tale of a crocodile who can sing but can’t talk. All Lyle wants to do is belong to someone while doing his favorite thing, singing, and dancing. The songs are a mixture of original and some pop favorites, with the best one a rousing duet between Lyle and Hector, as Hector tries to get Lyle to perform in a theatre. Kids will enjoy Lyle, a ham at heart, and the songs, sung by Shawn Mendes, are catchy. The film falls a bit in the second act, when the bad guy, Mr. Grumps, gets involved with putting Lyle away from his new family, but the big number near the end makes up for it. Overall, Lyle, Lyle, Crocodile is a good time; parents will enjoy the music, and the kids will enjoy a rather large crocodile singing his heart out. My Rating: Bargain Matinee   Lyle, Lyle, Crocodile Website  Now playing in theatres nationwide.

Forgotten Film: Coal Miner’s Daughter (1980) PG   The life of singer Loretta Lynn (Sissy Spacek), who grew up poor, married when she was 13, and had, by age 18, four children. Her husband, Doolittle (Tommy Lee Jones), gave her a guitar, and Loretta began singing songs she wrote about her life. Those songs would propel her into a career that would make her a superstar and one of the country's greatest singer/songwriters. Loretta Lynn died this week, and I thought of this movie where Sissy Spacek gives the performance of a lifetime and an Oscar-winning one to boot. Tommy Lee Jones is perfect as the country-bred man who saw greatness and believed in his wife's talent. Beverly D”Angelo is magical as the legend Patsy Cline, who takes the raw talent of Loretta Lynn under her wing and shows her how to handle fame both on and off stage. Full of beautiful songs, most of which are sung by Spacek, this is a tale of grit, determination, and love. Coal Miner's Daughter is one of those rare films worthy of the great artist it depicts.   My Rating: I Would Pay to See it Again   Coal Miner's Daughter Info

Weird Credits: From the credits of Hellraiser: Gender and Sexuality Consultant

Coming Soon to a Screen Near You: The Menu (2022) R  An obsessed foodie (Nicholas Hoult) and his girlfriend (Anya Taylor-Joy) are a last-minute addition to a trip to a secluded island, where a world-famous chef (Ralph Fiennes) is to serve them the meal of a lifetime. Unfortunately, it just might be their last. The film is from two-time Emmy Award winner Mark Mylod (Succession) and is getting great word of mouth from its screening at the Toronto International Film Festival.    The Menu Website  Scheduled to be released in Mid-Nov. 2022.