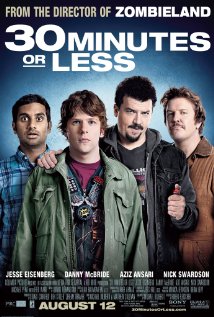 My View:  30 Minutes or Less:  Jesse Eisenberg (The Social Network) is a pizza delivery guy who is kidnapped, gets a bomb strapped to his chest and is told he has ten hours to rob a bank, or it’s boom. He enlists his best friend, Chet (played by Aziz Ansari) to help him rob the bank, but things just don’t go right for the pair.  This is a comedy that has quite a bit of action and violence and, as with most recent films, goes for the cheap, crude joke.  I was disappointed that Eisenberg would stoop to do a film this bad as he has done some funny stuff in the past (Advertureland and Zombieland). With this film, the pizza was late, it wasn't what we ordered and it was cold. By the way, if you stay to the end of the film, you may want to hang through the credits as there is some bonus footage, but…why would you…stay?   My rating:  You Would Have to Pay Me to See it Again   30 Minutes or Less Website

The 50 (a movie from my best/worst film of all time)
#37 Best Film
Kings Row  (1942)  Ronald Reagan and Robert Cummings play two young men growing up in a small town during the turn of the twentieth century.  Cummings is an idealistic man who is studying to be a doctor; Reagan is a carefree guy who is rich and enjoys being single.  There are troubles in this seemingly perfect community, and the two are forced to make choices in their lives that will affect their friendships and the lives of others.  Master cinematographer, James Wong Howe, does an incredible job of lighting this B&W masterpiece, and Reagan gives the performance of his lifetime.   Kings Row Info

Forgotten Film:  The Accidental Tourist  (1988)  After suffering through the accidental death of his son and his crumbling marriage, William Hurt plays a travel book writer who is just trying to make it through another day.  One day, he takes his dog to a dog trainer and meets a woman that changes his outlook on life.  Hurt gives a brilliant performance as the downtrodden writer, but it’s Geena Davis, as the single mom dog trainer, who steals this movie.   The Accidental Tourist Info

In Case You Missed it (A Film Just Released on DVD):  The Conspirator (2011)  Robert Redford directed this true story of trial of the mother (played by Robin Wright) of one of the conspirators of President Abraham Lincoln’s assassination.  A young lawyer (played by James McAcoy) comes to her aid as the government stream rolls the case against her.  Wright’s performance is worth seeing when she plays a mother who is willing to die for her son.  My Rating:  Cable   The Conspirator Website

In Memory of Ed Wood (A Movie I’ve Only Seen in Trailers but Just Looks Like a Bad Idea):  The Sitter  Jonah Hill is a suspended college student who is forced to take a babysitting job.  In a rip–off of a much loved Adventures in Babysitting(1987), Hill takes the three kids he’s babysitting on a night of bar-hopping while trying to avoid drug dealers.  Man, does he know how to treat kids to an adventurous night.   The Sitter Info
Weird Credits:   From the credits of The Devil’s Double (2011):  Tax Shelter Financing
Coming Soon to a Theatre Near You:  Contagion  This thriller is about a team of doctors who try to halt the rapid expansion of a deadly outbreak of an unknown virus that has the potential to kill half the world in only months.  The all-star lineup is the attraction of this film with a headliner cast of Matt Damon, Kate Winslet, Jude Law and Gwyneth Paltrow.   Contagion Info 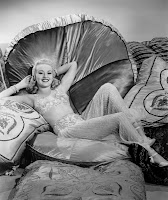