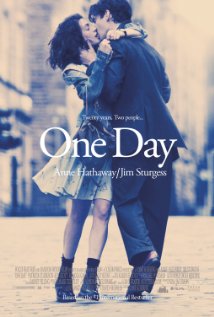 My View:  One Day   Emma (Anne Hathaway) and Dexter (Jim Sturgess) meet on the day they graduate college and spend the night together. They each go their separate ways, but they stay in touch. They have different career paths; he becomes a successful, late night TV host, but she can’t seem to find her way.  She continues to pine for Dex to the excessive point where you just want smack her in the head and say “Get it together.  He’s not worth it.”  That’s the biggest problem with this film.  You can (though it’s hard) accept that he doesn’t see how beautiful she is (Hathaway doesn’t play frumpy very well), and you can ignore her bad English accent, but you can’t ignore how much of an asshole he is!  And, that is why, throughout the film, you question (and can’t believe) why she loves him so much.  I won’t ruin the ending for you, but man is it frustrating.  Here’s hoping that “One Day” Anne Hathaway finds a good romantic film.   My Rating:  Cable   One Day Website

The 50 (a movie from my best/worst film of all time)
#36 Worst Film:
Sgt. Pepper’s Lonely Hearts Club Band  (1978) This is one of those films that, when you’re watching it, your jaw drops and you just can’t believe what you’re seeing.  You almost expect your eyes and ears to bleed.  It’s that bad.  The idea behind this film was to tell the story, by using the songs of The Beatles, of a small town band that deals with the fame and corruption of the music business.  It stars The Bee Gees and Peter Frampton as the band members, with an extra “all-star cast” performing the other musical numbers.  Are you ready for an 80 year-old George Burns doing “Fixing A Hole?”  Frampton has to be one of the least charismatic leading men of all time, delivering his songs as if he’s auditioning for the chorus of Donny and Marie.  Legendary Beatles producer, George Martin, should be forced to give back all the royalties he made for creating this wreck of a film.   Sgt. Pepper's Lonely Hearts Club Band Info

Forgotten Film:   Sounder (1972)   This four-time Academy nominated film tells the story of a Black sharecropper family in the depression era south and their son who is forced to become a man before his time.  Paul Winfield, as the father, is convicted of a petty crime and sent way to a prison camp.  His family has to keep the farm alive in his absence.  This burden falls on the mother, played by the incredible Cicely Tyson, and on the oldest son, played by Kevin Hooks.  The son is eventually sent to find his father and experiences amazing adventures on his journey.  A moving film that uses strong performances from its cast and a brilliant soundtrack from bluesman, Taj Mahal, to create an emotional and touching story of family, struggle and perseverance.   Sounder Info

In Case You Missed it (A Film Just Released on DVD):
Win Win (2011)   Paul Giamatti is a small town lawyer struggling to keeps his practice open and supplements his income by moonlighting as a high school wrestling coach. A troubled teenager (played by Alex Shaffer) shows up at an elderly client’s doorstep and, through a series of events, Giamatti and his family take him in.  Things start unraveling when the teen’s mother comes to town.  If you liked Little Miss Sunshine and Juno, then you should see this warm and touching film.  My Rating:  Full Price   Win Win Website

In Memory of Ed Wood (A Movie I’ve Only Seen in Trailers but Just Looks Like a Bad Idea):
The Thing (2011)   A remake or is it a prequel to the 1982 John Carpenter film of the same name?  At an  research site, an alien craft is discovered, and then people start dying.   Can’t scientists learn that it’s not wise to drill into an alien craft, especially if you are out in the middle of nowhere?  And, it’s never a good sign when you see the trailer, and you don’t recognize any of the actors other than the girl from Scott Pilgrim vs. the World.   The Thing Website
Weird Credits:   From the credits of Fright Night (2011):  Jerry’s Vampire Vocals
Flictionary (a definition of a film term):  Foley Artist:  The person who creates many of the ambient noises in a film, such as footsteps or glass breaking.  Foley, the effects-making process, is done in a recording studio, and various, unrealized props are used to re-create the sounds you hear (and maybe take for granted) in a film.
Coming Soon to a Theatre Near You:  50/50   Adam (played by Inception’s Joseph Gordon-Levitt) is a writer at a radio station who finds out he has cancer with only a 50/50 chance at survival.  His girlfriend (played by Bryce Dallas Howard) and his best friend (played by funnyman Seth Rogen) rally around him for support, but he doesn’t really come to grips with what he is dealing with until he meets a woman (played by Anna Kendrick) who is training to become a therapist.   50/50 Website 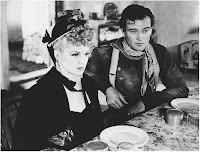