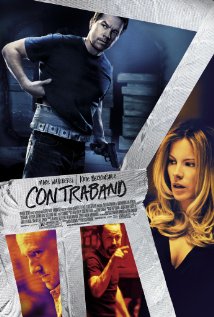 My View: Contraband (2012) Mark Wahlberg plays a former smuggler who is now a respectable businessman with a wife (played by Kate Beckinsale) and kids. But, he is pulled back into the game when his brother-in-law (played by Lukas Haas) messes up a smuggling run and owes a drug king pin a ton of money. So Wahlberg gets his old smuggling gang back together to do one last deal, this time smuggling millions of dollars of counterfeit money out of . This film offers no surprises, as you can see each plot twist from a mile away, and the action sequences are few and far between. Adding to this predictable film is one of the most bizarre performances I have seen in years when Giovanni Ribisi plays a tattooed drug lord who is hell-bent on destroying Wahlberg’s family. I have yet to figure out what type of accent Ribisi is using in the film, but I am almost sure he is speaking English.  My Rating: Cable   Contraband Website

Family Fare: Beauty and the Beast 3-D (originally released in 1991) Disney brings back the timeless tale of Belle and the Beast, but this time re-releasing the film in 3-D. Of course, this is one of the best animated films of the past 20 years, full of incredible songs and glorious hand-drawn animation. The big question - is it worth it to see the film again in 3D? I say it isn’t, as 3D doesn’t add anything to the movie and, at times, it takes something away. When I first saw this film in 1991, I was amazed at the ballroom scene.  The animation was so beautifully done that it almost seemed 3D at the time.  Now, though, the 3D format takes something away from this special scene and makes it not as vibrant and unique as it was in 2D. There is a funny short at the beginning of the film that features the cast from the 2010 film Tangled and uses 3D very well.  My Rating: I Would Pay to See it Again (just not in 3D)   Beauty and the Beast Website

Indyfest (A Look at a Small, Indie or Foreign Film): Pariah (2012) This is the story of a black teenager (played by Adepero Oduye) in  who leads a double life.  Her parents see her as a book smart young woman who has never grown out of her tomboy phase, but her friends and sister know that she is a lesbian looking for love and companionship. As the teen struggles to find her place in the world, her home life slowly falls apart when it becomes apparent that her father is having an affair, and her mother (played brilliantly by Kim Wayans) refuses to believe that her daughter isn’t interested in men. This is a film that uses warmth, understanding and a bit of reality thrown in to touch on the subject of a young woman discovering her true self.   My Rating: Full Price   Pariah Website

The 50 (A Movie From My Best/Worst Films of All Time)
#28 Best Film
A Night at the Opera (1935) It’s the Marx brothers at their zany best as they help two young lovers break into their chosen profession, the Opera. This is a film that you have to see multiple times as the brothers are so fast and furious with their lines, you are sure to miss one or two. This film contains one of the most iconic films scenes of all time as an impossible amount of people file into a stateroom on a ship, filling it up so much that when the door is opened, a dozen people fall out of the room. How could you not love a movie with the following dialogue between Groucho and : Groucho: “That’s in every contract. That’s what they call a sanity clause.” : “Ha-ha-ha! You can’t fool me. There ain’t no Sanity Clause!”   A Night At the Opera Info

Forgotten Film: Bedknobs and Broomsticks (1971) During WWII in  , three children are sent to the country to live with a strange woman, named Eglantine Price (Angela Lansbury). The kids soon discover that the woman is an apprentice witch, and they promise to keep her secret if she performs some magic for them. She places a magic spell on a bedknob that, when attached to the bed, allows the kids to travel anywhere that they wish. This film has imaginative songs, an incredibly talented cast, great sets, and Lansbury is perfect in the role of the witch who leads the kids on a magical journey, a journey that could take them on adventures they never could imagine.  My Rating: Full Price    Bedknobs and Broomsticks Info

In Case You Missed It (A Film Just Released on DVD): Moneyball (2011) Brad Pitt stars in this film about the real life General Manager of the  A’s baseball team, who uses unconventional methods to get his small market team to compete against the Yankees and Red Sox. While Pitt is perfect in his role, the movie is worth seeing because of Jonah Hill, who plays a freshly graduated Economics major who helps re-write the way a baseball team is put together.  My Rating: Full Price   Moneyball Website

In Memory of Ed Wood (A Movie I’ve Only Seen in Trailers but Just Looks Like a Bad Idea): W.E. (2012) The Madonna directed movie that somehow links the affair of King Edward VIII and American Wallis Simpson (remember The King’s Speech?) with a modern day romance between a married woman and a security guard. How can I say this…W.E. don’t care!   W.E. Website


Weird Credits: From the credits of Beauty and the Beast:  Special thanks for the L.A. Zoo.
Coming Soon to a Theatre Near You: The Woman in Black (2012) A lawyer goes to a remote village where there is a ghost terrorizing the locals. Hey, I just want to see if Daniel Radcliffe is as talented an actor as I think he is.   The Woman in Black Website 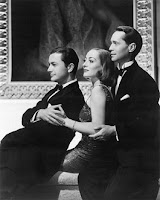