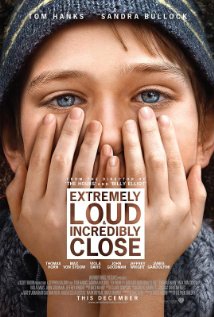 My View:  Extremely Loud and Incredibly Close (2012) A year after losing his father (played by Tom Hanks) who died in the World Trade Center towers on 9/11, a young boy finds a key in his father’s closet. Convinced that his father left him the key, he sets out to discover what the key unlocks and touches many lives on his exploration. This is a moving story that, at times, is very painful to watch as the boy’s mother (played by Sandra Bullock) tries to deal with a son who doesn’t always see the world as it really is. While Thomas Horn does an admirable job as the young boy, his character, whom I feel has Asperger’s syndrome, is not always likeable, especially when he acts up when he doesn't get his way. This film is not the cathartic film that we want (and possibly needed to help us deal with 9/11) and just doesn’t pull the heartstrings.  My Rating: Bargain Matinee   Extremely Loud and Incredibly Close Website

Indyfest (A Look at a Small, Indie or Foreign Film):  Haywire (2012) Steven Soderbergh (Traffic, Contagion, Ocean’s Eleven) directs this film about a private contracted solider who is set up during a mission. Gina Carano, who, in real life is a former Mixed Martial Arts fighter, and plays the soldier who is framed for murder and sets out to get revenge and hunt down the men responsible. I loved this film from start to finish with its terrific sound track, moody cinematography and marvelous fight sequences where you see Carano use every trick in the book to kill the bad guys. The film starts with an impossibly cool sequence at a remote diner, and the non-stop action begins there.  This film has an all-star cast with Ewan McGregor, Michael Fassbender, Antonio Banderas and Michael Douglas and the film keeps you guessing right up to the very end. The only thing you won’t be guessing about is that Carano is going to be kicking someone’s butt at every turn.  My Rating: Full Price   Haywire Website

The 50 (A Movie From My Best/Worst Films of All Time)
#27 Worst Film
Popeye (1980) Robin Williams stars in his first film as Popeye, a horrible musical comedy based on the Popeye comic strips/cartons. The film had just about every leading actor attached to it until  Altman (MASH) got the directing job - then everyone started dropping out. The film was plagued with problems from the start with a set that took 7 months to build.  They should have, though, spent the time and money on the script.  This film encompasses God-awful songs, a script that barely tells a story and Williams playing the big muscled guy with a mumble and a smirk. The film was halted for two weeks when Williams was hit in the head with a can of spinach, but after seeing this film, you might be the one who wants to be hit in the head.   Popeye Info

Forgotten Film: Creator (1985) Peter O’Toole plays an eccentric Nobel Prize winning scientist who is obsessed with bringing his dead wife back to life by cloning her.  He hires a student (played by Vincent Spano) to help him with the process and, along the way, the hired student falls in love with a fellow classmate (played by Virginia Madsen). What I really enjoyed about this film is that the characters are real, and this film does a outstanding job celebrating life and love. Peter O’Toole is fun as the quirky scientist, and Mariel Hemingway is delightful as the woman who just might give O’Toole a way to see a future without his wife in his life.   My Rating: Full Price   Creator Info

In Case You Missed it (A Film Just Released on DVD): The Ides of March (2011) George Clooney wrote and directed this old fashioned political thriller that tells the story of a Media Strategist (played by Ryan Gosling) who gets sucked into a behind-the-scenes game of cat and mouse of political intrigue.  I liked the film but feel that Gosling wasn’t quite up to the acting challenge of matching the acting talents of Clooney, Paul Giamatti and Philip  Hoffman.   My Rating: Bargain Matinee   The Ides of March Website


Weird Credits: From the credits of Haywire:  Stunt Climbers


Coming Soon to a Theatre Near You: Safe House (2012) Ryan Reynolds plays a young CIA agent who is in charge of a remote safe house when a master criminal (played by Denzel Washington) arrives. Things get interesting when the safe house is attacked, and Reynolds must go on the run with a man he has vowed to protect but can’t trust.   Safe House Website