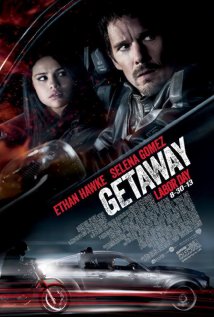 My View:  Getaway  (2013) PG-13   Brent (Ethan Hawke) is in a race against time after he' is forced to get behind the wheel of a tricked-out Mustang and do a mysterious man’s (Jon Voight) bidding to ensure that his kidnapped wife is not harmed. Along the way, he is joined by a computer savvy young woman (Selena Gomez) in his quest to get his wife back unscathed.  I’ll just say this right from the start - this is a bad film.  The staging of the car crashes/chases is horribly done.  There were times where I had no idea what was happening. Cars continually crash but often we don’t really know what caused the crash because the film direction is so bad.  We are asked to believe that Selena Gomez’s character can break into a computer system using just her iPad and that a majorly modified car can survive numerous shootouts and crashes.  The dialogue seems to be written by a twelve year-old, and I think the plot was conceived by Ford to show how much a Mustang can take. My Rating:  You Would Have to Pay Me to See it Again.   Getaway Website

My View:  Closed Circuit  (2013)  R  Terrorists set off a bomb in a crowded shopping area in London that kills more than a hundred people. A suspect has been arrested, and it’s up to two lawyers, Martin (Eric Bana) and Claudia (Rebecca Hall), to see to it that the suspected terrorist gets a fair trial. Martin and Claudia soon discover that there is more than just terrorism going on here. There may be a government conspiracy covering up certain aspects of the bombing. Not only are Martin and Claudia’s reputations at stake, their lives could be, as well.  This is a well done legal thriller with all the twists and turns you want in a suspenseful tale. I think the chemistry between Bana and Hall is fascinating as we see from their first meeting that there is a bit of history involved.  The movie seems to be ripped directly from today’s headlines, but, while there isn’t a lot of action, it’s an interesting story that keeps you on the edge of your seat and wondering if everything is going to turn out alright. My Rating:  Full Price   Closed Circuit Website

My View:  One Direction: This is Us  (2013)  PG  A behind-the-scenes look at the British boy band as they embark on a worldwide tour.  Fans of the group will love this film as it gives them quite a bit of behind-the-scenes as the tour goes from city to city. The film shows their origins on the British X-Factor where Simon Cowell hand-picked all members of the group.  The concert footage does a good job of helping the audience experience what it's like to go to one of their shows.  Overall, though, I think the film doesn't really give us a good idea of who these guys really are and what they are like as I feel everything we are shown is staged to present the group in the best light. While the film was shot in 3-D, I don't think it adds anything to the experience.  It’s not a bad film, but to the non-fan, it could be boring.  My Rating:  Bargain Matinee   One Direction: This Is Us Website

Indiefest:  Ain’t Them Bodies Saints  (2013) R  Bob Muldoon (Casey Affleck) and his pregnant girlfriend, Ruth Guthrie (Rooney Mara) are on the run from the law. Their luck runs out, and they are captured after a shootout. Bob makes it his life’s mission to escape from prison and find his way back to his true love.  Affleck and Rooney are first rate in this film and they play off each other with ease, so much so that you really believe they are deeply in love.  Rooney gives a performance that has depth as her character is conflicted between the life she has now, and the one Bob will give her if he returns from prison. The film perfectly captures small town life in 1970’s Texas.  It’s an extremely well done film about two star-crossed lovers, a movie that just might break your heart.  My Rating:  Full Price

Forgotten Film:  Nashville (1975) R  This film takes place over five days and leads up to a political rally at the Parthenon in Nashville.  It centers around the music industry in the city where you see the country superstars mix with the up-and-coming singers.  The cast in this film is huge - more than twenty-four major parts.  Most of the cast wrote their own music for the film, including Keith Carradine, who won an Oscar for Best Original Song for ,“I’m Easy.”  The film was directed by Robert Altman, and with most of Altman’s movies, a great deal of the dialogue was made up on the spot, with the script being used as only a guide for the storyline.  Many of the performers are based on real C&W stars - Henry Gibson’s character Haven Hamilton is based on Porter Wagoner and Ronee Blakely’s Barbara Jean is based on Loretta Lynn.  The film contains lots of musical performances, some of which are outstanding.  It’s a strange movie as most of Altman’s films are, but it’s worth seeing this cast do some magic on-screen  My Rating:  Full Price   Nashville Info

In Case You Missed It (A Film Just Released on DVD): The Great Gatsby  (2013)  PG-13  I did not enjoy this film.  It’s too long, and I think the use of hip-hop music doesn't fit the film.  I also feel that the director, Baz Luhrman, didn't let his cast act and put them in a very long music video. The cast of this film deserves a much better script.  My Rating: Bargain Matinee  The Great Gatsby Website

Weird Credits:  From the credits of Getaway:  Shelby interior maker

Coming Soon to a Theatre Near You:  Prisoners  (2013)  R When Keller Dover’s (Hugh Jackman) young daughter and her friend goes missing, the families of the two girls start to panic,  A main suspect is released due to lack of evidence, and that's when Keller decides to take matters into his own hands.  How far will he go to find his daughter?  The cast includes Jake Gyllenhaal, Viola Davis, Melissa Leo, Terrence Howard, Maria Bello, and Paul Dano.