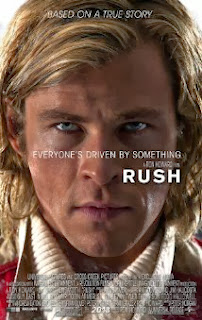 My View:  Rush  (2013)  R  This is the true story of the 1976 Formula One racing season which came down to two drivers, the good looking English playboy, James Hunt (Chris Hemsworth), and the serious, calculating Austrian, Niki Lauda (Daniel Bruhl).  Can Hunt conquer his partying ways long enough to beat the seemingly unbeatable Lauda?  This film contains some of the most remarkable and realistic racing scenes I have ever seen in a movie.  Hemsworth isn’t bad as the cocky British racing icon, Hunt, but it’s the performance of Daniel Bruhl as the arrogant, unlikable Lauda that makes this film work as well as it does.    Burhl’s Lauda dominates every scene he is in, and Burhl gives a multi-layered performance that is sure to get the Academy notice.  Fans of action films will really enjoy this film as will all the Formula 1 enthusiasts as the movie flies by from race to race.  My Rating:  Full Price Rush Website

Family Faire:  Cloudy with a Chance of Meatballs 2  (2013)  PG  Flint (Bill Hader) and his friends are forced to leave Swallow Falls so that a team from The Live Corp. can come and clean up the island. Flint then discovers that his invention, the FLDSMDFR, is still working and, now instead of creating food, it’s creating food that comes alive as animals.  So, Flint, Sparks (Anna Faris), Tim (James Caan), Steve the Monkey (Neil Patrick Harris), Brent (Andy Samberg) and Officer Earl (Terry Crews) must travel back to the island to stop the food-animals from invading the rest of the world.   While not as funny or as original as the first film, this movie is still a fun ride for both adults and kids.  A ton of puns and sight gags keep this film moving at a quick pace which makes the movie seem shorter than its 95 minute length.  This is one film that adults can take their kids to and not be bored out of their minds.  My Rating:  Bargain Matinee  Cloudy with a Chance of Meatballs 2 Website

Forgotten Film: Westworld (1973)  PG  The “vacation of the future” has been developed where the rich can vacation at a theme park divided into three sections:  Medieval World, Roman World and Westworld.  Customers can go back in time and live out their fantasies with the help of robots that will fulfill their every desire.  Peter (Richard Benjamin) and John (James Brolin) decide on Westworld, and they become gunslingers in a Wild West town.  Things are going great until something goes wrong, and a robot called, “Gunslinger” (Yul Brynner), begins killing vacationers for real.  Now Peter and John must duel it out with the Gunslinger to survive.  The film is a little cheesy, and the plot line a little thin, but it’s a whole lot of fun to watch Yul Brynner relive his glory days as a western star.  My Rating: Bargain Matinee  Westworld Info
In Case You Missed It (A Film Just Released on DVD / Blu-ray):  Iron Man 3 (2013)  PG-13  I enjoyed this film, though I did get tired of all the one-liners that Tony throws out.  The action sequences are excellent and the chemistry between Paltrow and Downey was still there.  I especially enjoyed Ben Kingsley chewing up the scenery as the bad guy.  My Rating:  Full Price  Iron Man 3 Website
Weird Credits:  From the credits of Cloudy with a Chance of Meatballs 2:  Helpdesk Manager
Coming Soon to a Theatre Near You:  Carrie (2013)  R  Remake of the 1976 Brian De Palma film with Chloe Grace Moretz in the role that Sissy Spacek made famous.  Should be an interesting update on a film that was about high school bullying before we knew what that was.  Carrie Website
Posted by Mike at 12:30 AM