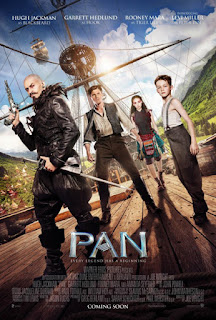 My View:  Pan (2015)  PG  An orphan named Peter  (Levi Miller) has always dreamed that his mother would someday come back and save him from his life at the orphanage. In the middle of the night, he is stolen by Blackbeard (Hugh Jackman) and his men.  They take him to the magical Neverland, where he meets James Hook (Garrett Hedlund) and the beautiful Tiger Lily (Rooney Mara). The legend is that Blackbeard will die at the hands of a boy who can fly. Could Peter be the foretold boy sent to save Neverland from Blackbeard? Where to start with this huge mess of a movie. Oh, I know. It’s not a musical but when we first meet Blackbeard and his mineworkers, they sing “Smells Like Teen Spirit.” It’s as jaw dropping weird as it sounds. Later on the mine workers sing The Ramones “Blitzkrieg Bop.” Why? I don’t know, but it sums up this film. It’s just bizarre and bad. Add to the mix that Peter is living in London in the 1940’s during WWII (not turn of the century London like in the book), horrible CGI special effects that look like they were done in the 1960’s and cast that seems bewildered on how to play their roles. To top it all off, Tiger Lily speaks with a bad Irish accent. There are also some rather scary scenes, so don’t take kids younger than 7. While the film was shot in 3-D, don’t waste your money, it never uses the technology to its advantage. I was going to make a walk the plank joke at the end of my review, but this film isn’t worth the effort.    My Rating:  You Would Have to Pay Me To See It Again   Pan Website

My View:  99 Homes  (2014)  R   Dennis (Andrew Garfield) starts working for businessman Rick (Michael Shannon) after Rick evicts Dennis and his family from their home. Dennis soon discovers that the world that Rick works in can be a dark and rough trip. This is a moving and gut-wrenching film about the 2010 homeowner foreclosure crisis. I enjoyed Andrew Garfield’s performance of a man who is trying to get his family home back and starts doing some very bad things. Michael Shannon, as always, gives a memorable performance as the shady real estate owner who is willing to break the law and destroy lives in the name of money and power. This is not an easy film to watch, and I am not sure everyone will be happy with its ending, but if you want to see two excellent actors go toe-to-toe on screen, this is the film for you.    My Rating: Full Price   99 Homes Website

Indiefest:   Big Stone Gap  (2014)  PG-13  In a small town up in the Appalachian Mountains, Ave Maria Mulligan (Ashley Judd)  is the town’s pharmacist and its self-proclaimed spinster. She is leading a quiet life until she discovers a long-held secret, discovering she’s not who she always thought she was.I love Ashley Judd, and I usually like quirky, Southern tales of small town life, but I felt the script let down its cast. The storyline is slow-moving, and it’s as charming as it thinks it is. I did enjoy Ashley Judd, but it’s hard to believe that she has never had a boyfriend. The secret isn’t a big game changer, and the film feels forced to try and make it so. It’s not a bad film, and some will enjoy it. I just wanted more from it.   My Rating: Bargain Matinee    Big Stone Gap Website

Indiefest:  Finders Keepers  (2015)   R   Documentary about a man, Shannon Whisnant, who purchased an outdoor grill at a storage locker auction.  When he got home, he opened up the grill and discovered an amputated leg inside it.  What happens next would change his life. “Finders Keepers” is one of those documentaries that starts out heading in one direction and then surprisingly, midway through the film, it changes, and goes in a totally different direction and tone. I saw this film within a sold out theater, and the audience was laughing at the beginning of the film so hard that I couldn’t hear all the narration. The first half of this film is brilliantly funny. It could have kept this tone throughout, but to the credit of filmmakers Bryan Carberry and J. Clay Tweel, the film becomes more about the two men and their struggles with life and less about the leg and how redneck they both are.  This is an amazing film about two damaged men who are filled with humor, heartbreak, and redemption. It’s a movie that displays the hopes and dreams of two men who are desperately trying to fulfill their perceived destiny and the cost it takes to achieve it. The film shows us that one’s life can take unexpected twists, and you just might end up a very different person than as who you began.  My Rating: Full Price    Finders Keepers Website

Indiefest:  Coming Home  (2014)  PG-13  Lu (Daoming Chen) and Li (Feng Wanyu) are a loving couple with a young daughter when Lu is sent to labor camp during the Cultural Revolution as a political prisoner. Years later he returns to find his family changed in more ways than just age. This is a moving film that shows the sacrifices that a family must make to help their loved ones. It’s a film that slowly explores the family dynamic and how one mistake can cause that dynamic to change forever. The acting is superb, and Daoming Chen gives a hauntingly beautiful performance of a man who just won’t give up for his loved ones.  My Rating: Full Price    Coming Home Info

Indiefest:  Freeheld  (2015)  PG-13   Laurel (Julianne Moore) is a no-nonsense police detective who works with her partner, Dane (Michael Shannon). She meets and starts dating Stacie (Ellen Page), a car mechanic. They start a long term relationship that is cut short when Laurel is diagnosed with terminal cancer. Laurel wants her pension benefits to go to Stacie after her death, but the county does not recognize Stacie as a legitimate benefactor. Laurel and Stacie fight for their right to be seen as a real couple. This film has an incredible cast, unfortunately, it has a script that never delivers the emotional punch that it needs. Moore and Page have zero chemistry together, in fact, there is much more chemistry between Shannon and Moore, the two police partners. It feels like a movie that is trying to swing for the Oscar fences and instead strikes out badly. This should have been an incredible story (it’s based on actual events) but it lets its cast, and ultimately its audience down instead.   My Rating: Bargain Matinee   Freeheld Website

Indiefest:  He Named Me Malala  (2014)  PG-13  Documentary about the young Pakistani girl who stood up to the Taliban over education for young girls. She was targeted by Taliban gunmen and shot in the head. She survived and went on the write about her story.  An interesting film about a strong and unique young woman who is wise beyond her years and so eloquent.   There are parts of this film that will move you to tears. It’s a powerful film about how one person, no matter how small, can change the world, not by their actions, but with their words. It’s an inspirational film that every parent should let their pre-teen/teenager see. Malala is a true hero for whom the whole world can root, and with this film, you see why that is true.   My Rating: Full Price   He Named Me Malala Website

Forgotten Film:  The Outfit  (1973) PG   Robert Duval stars as Macklin, who, along with his brother, made the mistake of robbing a bank that was owned by “The Outfit.”  Macklin’s brother is killed by The Outfit, and Macklin is sent away to prison. Now Macklin is out of prison and is bent on getting revenge on The Outfit with the help of an old partner (Joe Don Baker).  The film has a great script that uses fully flushed-out characters who seem real. Duval is a master at milking everything out of a scene and makes a bad guy for whom someone to root. The film uses violence sparingly, so when it does happen, it has a great impact. If you like a good, old-fashioned gangster movie with a modern twist, this film is for you.  My Rating: Full Price   The Outfit Info

Weird Credits:  From the credits of Pan:  Weather Consultant 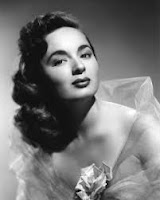