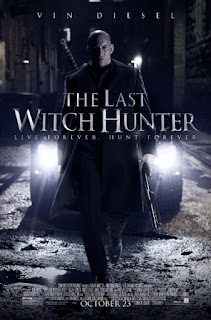 My View:  The Last Witch Hunter (2015)  PG-13  An immortal witch hunter named, Kaulder (Vin Diesel), teams with a beautiful female witch (Rose Leslie) to stop the covens of New York City from destroying humanity by unleashing a horrific plague. This is a film where you know what you are getting even before the opening titles run; a film that isn’t bad enough to be fun but a mediocre film that gets old very quickly. The action sequences are horribly staged with shaky camera work and a lot of very quick cuts.  The cuts are so fast I had a hard time knowing what was happening. It’s a movie that thinks it has to explain everything, sometimes two or three times. Vin Diesel is fine as an action hero, but he has trouble with slow moving scenes where he has to handle a lot of dialogue and, unfortunately, there a lot of them. He does have nice chemistry with Leslie, who plays his reluctant sidekick, but she isn’t given much to do in the film, except to scream. Michael Caine is wasted as a priest who helps the witch hunter in his missions, but he spends most of the film in a drug-induced deep sleep.  I almost fell asleep while watching this slow moving “action” film.  My Rating: Cable   The Last Witch Hunter Website

Indiefest:  Rock the Kasbah  (2015)  R  Richie (Bill Murray) is a Rock-N-Roll manager who has seen better times. While taking his last remaining artist on a USO tour in Afghanistan, he finds himself in Kabul and discovers a young Afghan girl (Leem Lubany) whom he mentors while she competes on the Afghanistan version of American Idol.  This is one disappointing film, so much so, that you feel that actors like Bruce Willis and Danny McBride did this movie just for the paycheck. There are a couple of times you can see glimmers of a better film, but those moments are few and far between. More often you are frustrated by the weak and lazy script that seems to put every cliché character that you could think of in the film. My biggest disappointment is with Murray. He comes off not as the charming and impish actor we all adore, but one who is irritating and annoying. Murray tries to put on the charm, but it never clicks, just making those attempts seem tired and lacking any emotion. Murray isn’t helped by a script written by Mitch Glazer and directed by Barry Levinson. They give Lubany, who has a beautiful singing voice, absolutely nothing to do but say a few throwaway lines about being brave. Levinson, who directed such gems as “Avalon,” “Diner” and “Wag the Dog,” is at his worst in this film. The film feels choppy as the transitions from each scene drag, and the few action sequences seem stilted. The film lacks any powerful emotional moment and never gives us anything to cheer for. The last ten minutes of this movie just seem to give up and go for the big clichéd finish because the script paints the story into a corner.   My Rating: Cable   Rock the Kasbah Website

Indiefest:  Time Out of Mind (2014)  PG  George (Richard Gere) has been homeless and on the streets for a long time. He seeks refuge at Bellevue Hospital, a Manhattan intake center for homeless men. He makes friends with a fellow homeless man (Ben Vereen) who convinces George to try and mend his relationship with his daughter.  This film tackles the subject of the homeless by slowing immersing us in their world. The film follows George from a distance, shooting him from afar as we look at George through windows and doorways.  We see a man who has been beaten down by life, his only mission is to survive and find a place to sleep for the night. George is a man who handles the rejection by the public with a quiet grace, never getting into confrontations, even with the people who throw him out of buildings or entrance ways.  It’s a stunning and fascinating performance by Gere, and he is on-screen throughout the entire film. It’s a role that few would tackle, as Gere lets us see a character who is raw and exposed. This is a film that lets us see a person on the street as someone human, not a person that we usually just ignore.  This is a film that will change the way you see and deal with a very difficult subject.   My Rating: Full Price   Time Out of Mind Website

Ryan (Chris J. Murray) and his family have just moved into a new home. Ryan finds a 20-year-old tape that shows two girls being taught supernatural abilities by what appears to be their mother.  Soon, after viewing the tape, strange things start happening in the house, and it seems Ryan’s daughter is being targeted by supernatural forces. The fifth and hopefully last of the “Paranormal Activity” series is the worst of the bunch, going out like a whimper of a person being terrorized by a ghost. While the film was shot in 3-D, it doesn’t look it, as the 3-D effects only show up when the supernatural beings appear. The scares are minimum and are all of the "jump out of the dark" with a loud noise variety. The film uses the  “found footage” genre, but that genre is getting old and has worn out it’s welcome. What started out as a phenomenon has ended as a ho-hum bland film. And please, no one stare into a mirror and say "Bloody Mary" three times. I really don't want to see any more of these films!   My Rating: You Would Have to Pay Me to See It Again     Paranormal Activity: The Ghost Dimension Website

Indiefest:  Experimenter (2015)  PG-13  A famous social psychologist, Stanley Milgram (Peter Sarsgaard), in 1961, conducted a series of behavioral experiments that were extremely controversial. The experiments tested ordinary humans and their willingness to obey authority, even if it meant that someone else might get hurt.  A bit of a warning; this film isn’t for everybody as it “breaks the fourth wall” - the main character, Milgram, speaks directly to the audience while the scene he is in continues in the background. Also, the film uses techniques such as having the characters do a scene in a car that is obviously shot on a soundstage or using a background that is painted on a big canvas, not looking very realistic at all. A couple of times, Milgram is talking about the “elephant in the room,” when there is literally an elephant in the room. The film is an interesting look at the human condition and why we do things when we know they could be wrong or have a bad outcome. Sarsgaard gives an intelligent and dazzling performance as the complex and complicated psychologist. While not a challenging role, I did enjoy Winona Ryder as Milgram’s wife who becomes a partner in Milgram’s experiments. It’s a challenging film to watch, but much like its main character, it’s worth getting to know.   My Rating: Full Price

Forgotten Film:  All the Right Moves  (1983)  R   A high school football player (Tom Cruise) who sees football as a way to get out of his small, steelworker town, clashes with  his head coach (Craig T. Nelson), a man who seems to be on track to get a college coaching job. Cruise gives a flawless performance as the headstrong high schooler who is convinced that he has the talent to play at the next level.  Nelson gives one of his better performances as the hard driving, stubborn coach who rules over his team with an iron fist. What makes this movie is the performance of Lea Thompson, who plays Cruise’s characters girlfriend. Her character isn’t just the usual teenage girlfriend, but Thompson makes her a real person who is just as desperate to get out of the small town but doesn’t see as many opportunities to escape as her football playing boyfriend has.   My Rating: Full Price   All the Right Moves Website

Weird Credits:  From the credits of Experimenter:  Art Swing