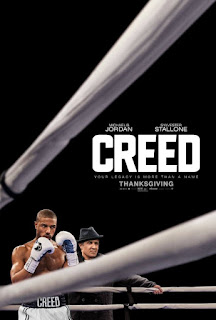 My View:  Creed  (2015) PG-13   The illegitimate son of Apollo Creed, Adonis Johnson Creed (Michael B. Jordan), wants to follow in his father’s footsteps and be a boxer.  He is willing to do just about anything to reach his goal, including moving to Philly to get the man who beat his father, Rocky (Sylvester Stallone), to help him train.  This is one of the best films of the year and has some of the greatest fight sequences I have ever seen. There is a fight in the film where we follow Adonis from the cramped dressing room to the small ring in a seedy auditorium, that in one continuous shot that doesn’t cut away till the whole fight is completed. It’s a spectacular sequence that punctuates this film with a bang. Jordan sizzles on-screen as the troubled but talented son of Apollo Creed. Stallone gives an Oscar-worthy performance that is understated and moving. Jordan and Stallone have phenomenal chemistry that makes this film work from all angles. This film is a nice homage to the “Rocky” films without getting too campy or sweet, and the final fight sequence is thrilling and just as exciting as any action film that has come out in the past few years. Just like the original Rocky, you will want to see Creed more than once.    My Rating: I Would Pay to See It Again   Creed Website

Family Faire:  The Good Dinosaur  (2015) PG  What if the asteroid that caused the dinosaurs to die off never hit earth and humans and dinosaurs lived at the same time? An Apatosaurus named Arlo (voiced by Raymond Ochoa) has been separated from his family, and he enlists a human boy named Spot (voiced by Jack Bright) to help him complete the tough journey home. The animation in this film is unimaginably beautiful, highly realistic and drop dead gorgeous  looking film. The story isn’t quite up to the Pixar magic touch of films like the Toy Story franchise, but it’s a sweet story of finding courage within yourself to tackle life’s obstacles. Kids will enjoy the antics of Spot, and adults won’t be bored with the storyline. The film is reminiscent of the old Disney films like The Incredible Journey, and, for some, will bring a few tears near the end. This film is delightful, and, while not quite Pixar’s best, is still fun to watch.  My Rating: Full Price   The Good Dinosaur Website

My View:  Victor Frankenstein (2015)  PG-13  The legend of Frankenstein (James McAvoy) before he created his monster, told from the perspective of his friend and colleague, Igor (Daniel Radcliffe).The film is a retelling of the Frankenstein’s monster story, centering on Igor. Unfortunately, it loses all the meaning behind the story, making the film feel shallow and simple, something the Frankenstein story isn’t. Radcliffe is wasted as Igor and James McAvoy chew up the scenery in every scene. The ending feels rushed and unsatisfying.    My Rating: Cable     Victor Frankenstein Website

Indiefest:  Legend  (2015)  R  Two identical twins, Reggie, and Ronnie Kray (Tom Hardy), are bent on creating an organized crime empire in the East End of London during the 1960’s. Their reign will be noted as one of the bloodiest times in the city’s history. This film wastes an intense and virtuoso performance by Hardy in the two Kray roles. The film never finds it’s footing, getting caught up with the violence without letting us ever understanding the characters. The movie is overly long, sometimes tedious and only occasionally shows us glimpses of what the film could have been. Only the most devoted Tom Hardy fan will enjoy this film. If you are interested in the subject matter, there is a much better film from 1990 called The Krays that deals with the storyline in a much more satisfying conclusion.   My Rating: Bargain Matinee   Legend Website

Indiefest:  Trumbo  (2015)  R  In 1947, Dalton Trumbo (Bryan Cranston) was Hollywood’s highest paid screenwriter and one of t he most talented writers out there. There was one problem: Trumbo was a registered member of the Communist Party, and the U.S. government was targeting communists for persecution. Trumbo is fired from his job and suffers the injustice of the blacklist, which kept writers, actors, and directors from working on any film.  Cranston gives a complex and scintillating performance of a man who liked to tweak the establishment and was probably too smart for his own good. The talented cast includes Diane Lane as Trumbo’s wife, Helen Mirren as gossip maven Hedda Hopper, Louis C.K. as troubled screenwriter Arlen Hurd, and John Goodman as Frank King, the king of “B” pictures. Dean O’Gorman stands out doing a dead-on portrayal of Kirk Douglas, the actor who was instrumental in Trump’s triumphant return from the Blacklist. The film's big flaw is that it tries to cover too much ground and deals with too much time and too many instances of Trumbo battling the system. It’s a film with some sparkling and vivid performances that, unfortunately, is brought down by its length.    My Rating: Bargain Matinee   Trumbo Website

Indiefest:  Peggy Guggenheim: Art Addict  (2015)  Documentary about Peggy Guggenheim,  an heiress to her family fortune who became a central figure in the modern art movement. As she moved through the cultural upheaval of the 20th century, she collected not only art but artists. Her colorful personal history included such figures as Samuel Beckett, Max Ernst, and Jackson Pollock. This is a fascinating film about a woman who lived a life filled with art and artists. The film shows us that not only did Guggenheim have great taste, but she also single handily saved some of the great modern art paintings from the Nazi’s, buying up hundreds of paintings and then shipping them to the U.S. just before the fall of Paris. I have always loved modern art, and this film made love it even more.    My Rating:  Full Price   Peggy Guggenheim: Art Addict

Forgotten Film:  Being There (1979)  PG  A simple, sheltered gardener (Peter Sellers) is pushed out into the real world when his employer dies. Through a series of chance events, he becomes an advisor to a powerful businessman who has the ear of the most powerful people in Washington. Sellers is brilliant as Chance, a man who has only known gardening and spouts gardening tips that are perceived as highly intelligent commentaries on the ills of society.  The film, beautifully directed by Hal Ashby, is part black comedy and part satire. Melvyn Douglas won a Best Supporting Actor for his role of the businessman who takes Chance under his wing and unwittingly makes him one of the most admired men in America. The last scene of the film is not to be missed.    My Rating;  Full Price   Being There Info

Weird Credits:  From the credits of Creed:  Additional Voices

Coming Soon To a Theatre Near You:  The Lady in the Van  (2015)  PG-13  A man (Dominic Cooper) makes friends with a feisty old homeless woman (Maggie Smith) who lives in a van that has been parked in his driveway. Hey, any film is made better with Maggie Smith. 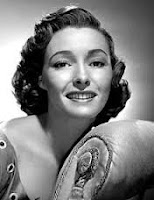