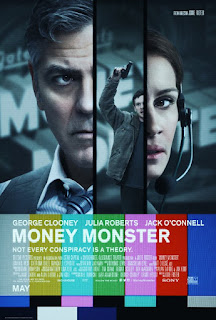 My View:  Money Monster  (2016)  R Financial TV host Lee Gates (George Clooney) and his producer (Julia Roberts) are held against their will in the studio by a disgruntled investor (Jack O’Connell) who wants Lee to hold the people who ruined his life accountable. This is another film where I said after seeing it, “Great cast, okay film.”  I wanted the film to better, but it never quite hits its mark. The pacing of this film is very slow, making the movie seem much longer than the hour and a half running time. Clooney, who plays an egomaniac who thinks he is God’s gift to both women and the TV audience, doesn’t look like he is breaking a sweat (except in the dance sequences and yes, Clooney dances), making me not totally believe the transformation of his character in the film. Roberts, who plays Clooney’s TV show producer, has to do most of the heavy lifting and makes the film seem more about her character and less about Clooney’s or Jack O’Connell’s character.  The film preaches a little too much, and I hated the ending (which I’m guessing was added after audience testing).     My Rating: Bargain Matinee   Money Monster Facebook Page

Indiefest:  High-Rise  (2015)  R   Dr. Robert Lang (Tom Hiddleston) moves into a 25th-floor apartment within a new high-rise tower. Dr. Lang soon regrets moving in as things in the building start unraveling very quickly. This is a movie that a few film critics will rave about due to its bizarre storyline, fast cuts, and at times, over the top acting. I, on the other hand, hated this movie, mostly due to the same points. The storyline is so bizarre, the only way I can describe it is it’s as if mental illness took over an entire building. If you do dare to see this film, be warned that there are scenes of rape, orgies, suicides and several dogs being served for meals (you read that right). It’s a movie that, after you see it, you’ll wonder how it ever got made.     My Rating: You  Would Have to Pay Me to See it Again   High-Rise Website

Indiefest:  The Man Who Knew Infinity  (2016)  PG-13 Growing up poor in Madras, India, Srinivasa Ramanujan Iyengar (Dev Patel) gains admittance to Cambridge University during WWI. He becomes a pioneer in mathematical theory with the help and guidance of his professor, G.H. Hardy (Jeremy Irons). I enjoyed this film which is a chess match between Ramanujan and Hardy. The film is about the two men finding common ground in math, bridging two very different, set in their way cultures. The two men give superlative performances, especially Irons playing the mathematician who has a hard time with personal relationships. While I did like this film, it is a little too predictable making the film seem a little slow.   My Rating: Full Price   The Man Who Knew Infinity Facebook Page

Indiefest: Being Charlie  (2016)  R   Charlie (Nick Robinson) is a troubled young man battling drug addiction. He is forced by his parents to enroll in a rehab program. While in rehab, he meets a fellow addict, Eve (Morgan Saylor), who changes how Charlie sees the world. I wanted this movie to be good, but instead, it’s just boring. After a promising start, the film gets bogged down into how bad Charlie feels his life is and how it really isn’t all that horrible. This is a film that hits you over the head, time and time again, to impress its message onto you. The problem is we never like Charlie, and, therefore, we don’t care what happens to him. When you leave the theatre, you wonder what happened to Rob Reiner (Stand by Me, The Princess Bride, A Few Good Men) to cause his career to sink to this depth.    My Rating: Cable   Being Charlie Info

Forgotten Film: Once  (2007)  R   Two people (Glen Hansard, Marketa Irglova) both working odd jobs to make a living while all they want is to make music. They meet on the streets of Dublin, and the girl decides to help the guy record a demo disc. As they play songs about their past lives/loves, they discover that they are slowly falling in love with each other. Written and directed by John Carney, who also brought us the brilliant Sing Street (2016) and the fantastic Begin Again (2013), first brought this film to us. The music is what makes this film work so well, and the two leads are phenomenal performers. This is a movie that you will watch over and over.    My Rating: I Would Pay to See it Again   Once Info

Weird Credits:  From the credits of Money Monster: Eco Assistant

Coming Soon to a Theatre Near You:  Me Before You  (2016)   PG-13  Lou (Emilia Clarke) has lost her job, and there aren’t a lot of prospects in her small town. She is forced to get a job as a caretaker for Will (Sam Claflin), who is wheelchair bound after a motorcycle accident. This job will change both their lives forever. This is one of those films that I just love and it will be interesting to see Emilia Clarke in a romantic role.   Me Before You Website 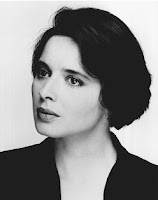 Email ThisBlogThis!Share to TwitterShare to FacebookShare to Pinterest
Labels: Being Charlie, Emilia Clarke, George Clooney, High-Rise, Julia Roberts, Me Before You, Money Monster, Once, The Man Who Knew infinity, Tom Hiddleston