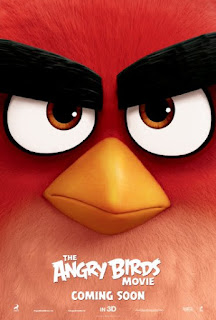 Family Faire:  The Angry Birds Movie  (2016)  Red (Jason Sudeikis) has an incident at kid’s birthday party and is sentenced by a judge to take anger management classes. There he meets the teacher, Matilda (Mya Rudolph), Chuck (Josh Gad), Bomb (Danny McBride) and Terence (Sean Penn), all of who soon go on an adventure with Red.  I hated this very unfunny and annoying movie. I didn’t like that several times there were very inappropriate adult puns uttered by the birds. The only thing going for this film is that the animation is very cool looking, and it was done with 3-D in mind. Let’s put it this way; I looked at my watch thinking the film had about 10 minutes left but discovered  it was only half way through. The film made me angry, angry enough to give the film the bird.    My Rating:  You Would Have to Pay Me to See it Again   The Angry Birds Movie Website

My View:  Neighbors 2: Sorority Rising  (2016)  Mac (Seth Rogen) and Kelly (Rose Byrne) are expecting their second child and need a bigger house.  The problem is they are never going to be able to sell their current house with the new neighbors next door, a hard partying sorority, led by Shelby (Chloe Grace Moretz). Mac and Kelly are going to need reinforcements, and Teddy (Zac Efron) is the man for the job.  I didn’t like the first one, as there were some funny parts, but that film never could keep its momentum. I feel the same about this film; I think mostly because I don’t like Mac and Kelly. Why should I root for them when I don’t like them? I did like Zac Efron’s performance, though.. He is consistently funny in the part of the un-grown-up frat boy. Efron is willing to make himself look ridiculous or stupid on the screen, and most of the time it works. I usually love Chloe Grace Moretz performances, but, to me, she mailed this one in. Do not take the kids as there is lots of drug use, a bit of nudity, cartoon-like violence and lots of cussing.   My Rating: Cable   Neighbors 2: Sorority Rising Website

Indiefest:  The Nice Guys  (2016)  In 1970’s Los Angeles, private eye Holland March (Ryan Gosling) must work with enforcer Jackson Healy (Russell Crowe) to find a missing girl. Along the way, they just might run into a few problems like stumbling onto a conspiracy that could get them killed. Co-written and directed by Shane Black, The Nice Guys is a laughed-filled, action-packed, good old-fashioned film noir mystery where Crowe, and especially Gosling, shine. Crowe plays the straight man to Gosling’s goofy Holland. Jackson is a part that isn’t easy to do, but Crowe plays off Gosling brilliantly, giving his character a world-weary menace. Gosling shows a talent for slapstick, bringing to mind Peter Seller’s Inspector Clouseau. Some of the best scenes in the film involve Gosling just falling, and he does it a lot…off roofs, down hills, and even across rooms. Black’s script, co-written by Anthony Bagarozzi, takes us on a very complex and funny adventure into the seedy world of bars, pornography, and, wait for it, car manufacturing. The dialogue is quick and witty with some great cultural references of the 70’s mixed in. Like Black’s under-appreciated 2005 film, Kiss Kiss Bang Bang, The Nice Guys perfectly captures the quirky pulp fiction style of filmmaking, combined with impressive action sequences, sidesplitting comedy and superb performances from Gosling and Crowe.    My Rating:  I Would Pay to See it Again   The Nice Guys Facebook Page

Indiefest:  The Meddler  (2016)  A recent widow, Marnie (Susan Sarandon), needs a project to keep her busy, so why not be in every aspect of her single daughter’s (Rose Byrne) life? While surrounded by a supporting cast that includes Jason Ritter, Michael McKean, Lucy Punch, Cecily Strong and Jerrod Carmichael, it’s Susan Sarandon’s film, with a great deal of help from Byrne and Simmons. Sarandon is phenomenal as the big-hearted, well-meaning Marnie. Sarandon has one of those rare qualities that almost as soon as she appears on the screen we like her character and want her to succeed in whatever quest she is on. She plays well off Rose Byrne, making their characters back-and-forth banter feel natural. Sarandon has equally exceptional chemistry with Simmons, making their attraction seem unique. As with the recent films, I’ll See You in My Dreams and Hello, My Name is Doris, The Meddler gives us hope that Hollywood will continue this trend of making films about strong, older women and women who are re-inventing their lives for the better. I don’t know about you, but I could use some of Marnie’s advice right now.   My Rating: Full Price   The Meddler Website

Forgotten Film:  Cinderella Liberty  (1973)  A sailor (James Cann) is without a ship and money because the Navy has lost his papers. He meets a hooker (Marsha Mason) and her nine-year-old son (Kirk Calloway). They latch onto each other and things seem to be working until an old Navy buddy comes to town and shakes things up. This is a slightly flawed film (a little too by the books about the hooker with a heart of gold) but is worth watching because of the performance of Marsha Mason. Mason’s hooker is full of bluff, but we can see that below the surface she is full of doubt and fear.   My Rating: Bargain Matinee   Cinderella Liberty Info

Weird Credits:   From the credits of The Nice Guys:  Body Painter

Coming Soon to a Theatre Near You:  Weiner  (2016)  Documentary on disgraced New York Congressman Anthony Weiner’s campaign for mayor of NYC. I haven’t seen one bad review of this film. It’s won some pretty impressive awards already including the Grand Jury Prize for Documentaries at this year's Sundance Film Festival.   Weiner Info