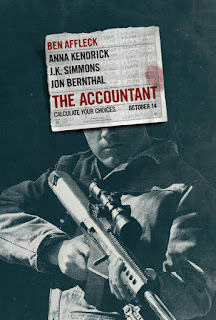 My View:  The Accountant  (2016)  R  Christian Wolff (Ben Affleck) is a math savant who gets along better with numbers than people. He works as a freelance accountant for some of the world’s most dangerous criminal organizations. As the Treasury Department closes in on Christian, he takes on a legitimate client, only to discover that the company is cooking the books. I thought this film was highly entertaining with its unique and unlikely hero, an accountant who probably has Asperger’s Syndrome and is a highly trained killer.  What surprised me was how funny the film is. The film uses Wolff’s quirkiness and his bluntness to great comedic effect. Affleck makes the action sequences seem effortless and believable. My only problem with the movie is that the director tried to pack too much into the plot, giving us almost an overload of information, especially about Wolff’s troubled childhood.  Overall this film is an action film with one of the most unique heroes in the history of cinema.    My Rating:  Full Price    The Accountant Website

My View:  Kevin Hart: What Now?  (2016)  R  Comedian Kevin Hart performs in front of a crowd of 50,000 people at Philadelphia’s outdoor stadium, Lincoln Financial Field. I enjoyed this film, but I never had that moment that you want in standup comedy; the laugh so hard you run out of breath moment. The film has a lively and entertaining opening where Kevin Hart goes all “James Bond” on us.  Even the opening titles seem like a “Bond” film. There is a hilarious bit with Halle Berry playing herself.  The most fun part of the Bond section is when Don Cheadle appears in the film. Once the standup starts (about 15 minutes into the movie) the material is funny, but I just don’t know if you will remember much of his act after the film. I did love the set, with the backdrop changing into whatever setting Hart was talking about. It’s a funny standup, but I don’t think it will go down in the history books like Eddie Murphy: Raw (1987) or Richard Pryor: Live on the Sunset Strip (1982). Note that after a short bit of credits, there is a bonus scene before the main credit sequence starts.    My Rating: Bargain Matinee   Kevin Hart: What Now? Website

Indiefest:  American Honey  (2016)  R  Star (Sasha Lane) is living in a bad situation and is looking for a way out.  When she meets a traveling magazine seller (Shia LeBeouf), she hooks up with his group and is about to go on an adventure of a lifetime. I am usually not a fan of movies where everyone in the film is unlikable, and that holds true for this film. The film is too long, goes almost nowhere and has characters that you wouldn’t want to let into your home, much less go on a road trip with. I wasn’t impressed with Shia LeBeouf’s performance, as I have a feeling that this character is much like LeBeouf in real life. The film has a look and a feel that it is set in the 80s but is actually set in the present time. I did like Sasha Lane’s breathtaking performance, and the cinematography is just stunning, capturing the landscape of America in all its vastness.  Overall it wasn’t worth spending 162 minutes with these characters, where the only thing that changes are the members of the group.   My Rating: Bargain Matinee   American Honey Website

Indiefest: Command and Control  (2016) During the 60’s and 70’s, the arms race between the United States and the Soviet Union was growing at a phenomenal pace. Nuclear missiles were placed in silos all across the world, including right here in the U. S.. Robert Kenner, who in 2010 brought us the Oscar-nominated documentary “Food, Inc.,” brings us a new scary and sobering documentary, “Command and Control.”  The film takes place at a United States Air Force missile launch facility just outside Damascus, Arkansas (50 miles from Little Rock) in September of 1980. Using reenactments, actual footage from the event and modern day interviews with the participants, the film looks at how a simple accident almost caused the detonation of a nuclear warhead on top of the largest missile in the US. Arsenal, the Titan II, an explosion that probably would have wiped out most of the Arkansas’s population.  There is more tension in this film than most Hollywood thrillers, and you will wonder how this could ever happen. It’s a chilling look at an accident that was waiting to happen. What I took away from this film is respect and admiration for the very young men who risked their lives to protect ours.  My Rating:  I Would Pay to See it Again   Command and Control Website

Forgotten Film:  Hopscotch  (1980) R A CIA agent (Walter Matthau) bungles an assignment and is given a desk job. He decides to write a tell-all book and then go on the lam. This is a thriller/comedy that works because the cast, especially Walter Matthau, is that darn good. By this time in his career, Matthau had perfected portraying the haggard, world beaten down hero, and he is extraordinary in this film. While not a great movie, it’s a blast watching Matthau work on the screen.  My Rating:  Bargain Matinee   Hopscotch Info

Weird Credits:  From the credits of The Accountant:  Life Casting Assistant

Coming Soon to a Theatre Near You:  Certain Women  (2016)  R The lives of three women (Michelle Williams, Kristen Stewart, Laura Dern) from Montana intersect and change all of their lives. I don’t always like director/writer Kelly Reichardt’s films, but they always make me think.   Certain Women Info 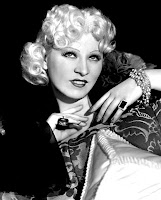