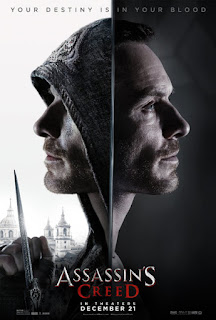 My View:  Assassin’s Creed  (2016) PG-13  Callum Lynch (Michael Fassbender) is a career criminal who is set for execution by Abstergo Industries, a front for the modern-day incarnation of the Templar Order.  He is forced by Abstergo to relive the memories of his ancestor Aguilar de Nerha, an assassin in the time of the Spanish Inquisition. What Abstergo Industries doesn’t realize is that by reliving these memories, Callum is gaining the knowledge that will allow him to defeat them. What a mess of a film! I had a friend who reviews video games and sat on one side of me and a 14 year-old-boy on the other, and neither could tell me exactly what the plot to this film was. Michael Fassbender (yes, that two-time Oscar nominated actor) has been trying to get this film made since 2012. I guess he promised a lot to get actors like Oscar winner Marion Cotillard and Oscar winner Jeremy Irons, along with Brendan Gleeson and Oscar-nominated Charlotte Rampling to work on this movie. As you would expect, Gleeson and Rampling don’t have to do too much but Irons and Cotillard are in every non-action scene. The action sequences are well done; the stunts are exceptional looking, and Fassbender is a decent fighter (and in shape), but that doesn’t make up for a horrible plot and an even worse ending.  My Rating: Cable   Assassin's Creed Website

My View:  Passengers  (2016) PG-13   A spacecraft is traveling to a distant colony planet with thousands of people, all of whom are in a state of suspended animation.  There is a malfunction of the sleep chambers for two of its passengers (Jennifer Lawrence, Chris Pratt) who have been awakened 90 years early.  I enjoyed the first 40 minutes of the film, which reminded me of an excellent 70s Sci-Fi film called Silent Running. The art direction is fantastic and the set design is brilliant, making this a film a wonder to watch. Unfortunately, the film goes downhill quickly, with a plot that takes forever to get going. I kept waiting for a twist to the plot, but it never came, and the ending of the film is so unbelievably simplistic that a 5th grader will be able to tell it wouldn’t ever work. I loved the chemistry between Lawrence and Pratt, with the courting sequence one of the most enjoyable parts of the film. The film is let down by the last third of the movie, leaving a rather bitter taste to end with.   My Rating: Bargain Matinee   Passengers Website

Indiefest:  Lion  (2016)  PG-13  A five-year-old Indian boy named Saroo ends up a thousand miles from home. After living on the streets of Calcutta, a miracle occurs. Twenty-five years later Saroo  (Dev Patel) is hoping for another miracle - that he find his long lost family.  I loved this film about the need to find your home and family, even against unbelievable odds. Sunny Power, who plays the five-year-old Saroo, has to be one of the cutest kids ever to appear on-screen, and his portrayal will break your heart - it’s that good. Patel (grown up from his breakthrough appearance in Slum Dog Millionaire) has the hard act to follow, but he is up to the task, as he portrays Saroo with the same determined and headstrong will to make it home that his younger self showed. Nicole Kidman is scintillating in what should be an Oscar-nominated performance as Saroo’s fragile adopted Mom. There is a scene near the end between Kidman and Patel that will have you in tears. This inspirational film is not to be missed and will thaw the coldest heart. Go on a journey with Saroo.  You won’t be disappointed.  My Rating:  I Would Pay to See It Again   Lion Website

My View:  Why Him?  (2016)  Ned Fleming (Bryan Cranston) is having a bad year.  His printing company may be going out of business, and his only daughter (Zoey Deutch), whom he thought was safely tucked away at college, is dating an older man, Laird (James Franco), who runs a video game company.  Now, Ned, his wife (Megan Mullally) and his young son (Griffin Gluck) are going to spend Christmas at Laird’s mansion.  Now that Adam Sandler is over making films for Netflix (which means I, thank goodness, don’t have to watch them), I think James Franco is bound and determined to fill the void. I love Bryan Cranston, but it pained me to see him have to deliver lines from this horrible script. The movie is unfunny, stupid and has a plot that could have been written by a cat. The only saving grace in this drivel of a film is the performance of Keegan-Michael Key, who breathes a little life into the movie playing Laird’s right-hand man. Please James Franco, quit making every movie they offer you and slow down enough pick some better scripts.  My Rating:  You Would Have to Pay Me to See it Again   Why Him? Website

My View:  Hidden Figures  (2016)  PG  The film tells the story of the African-American mathematician Katherine Johnson (Taraji P. Henson) and her two colleagues, Dorothy Vaughan (Octavia Spencer) and Mary Jackson (Janelle Monae), who worked at the Langley Research Center.  Their work helped NASA catch up to the Soviet Union and launched John Glenn into space.  Hidden Figures is an inspiring movie that is all the more remarkable because it’s based on a true story of three women who won’t be held down by their gender or skin color in the turbulent 60s in a scientific community dominated by men. Of the three main cast members, Janelle Monae stands out as the feisty, outspoken woman who dreams of becoming an engineer, even though the system throws roadblocks at her throughout her journey. I also enjoyed the performance of Kevin Costner, who plays the department head determined to find the best person for the job, no matter who it is. The film has a few slow points but covers so much ground that it keeps the story moving forward. It's a remarkable story about three women who were determined to prove that they could not only do the job if given the chance but would exceed at it.  My Rating:  Full Price   Hidden Figures Website

My View:  Fences  (2016)  PG-13  An African-American father, Troy (Denzel Washington) struggles to raise his family in the very segregated world of the 1950’s while coming to terms with the events of his life.  Based on the August Wilson Pulitzer Prize winning play, Denzel Washington directs and acts in this drama about a man who feels disrespected in life and wants his son to be a better man than he. Washington gives a mesmerizing performance as the hot-headed father, commanding the screen in every scene he is in. Viola Davis, as Troy’s wife, gives an equally multi-layered performance and is every bit Washington's equal up on the screen. The film is a bit stagy, but Washington does do a few camera tricks to keep it cinema-based. The supporting cast is exceptional, with Stephen Henderson playing Troy’s best friend with a heart of gold and Jovan Adepo as the driven son. It’s an experience to see acting this powerful, magnetic and moving on the screen.   My Rating:  Full Price   Fences Website

Forgotten Film:  Red Rock West  (1993)  R  A drifter, Michael (Nicolas Cage), comes into a Wyoming town and is mistaken for a hit man by a husband (J.T. Walsh) who wants his wife killed. Michael agrees to shoot the woman (Lara Flynn Boyle), but upon meeting her, Michael decides to let her in on what he has been hired to do.  Things get complicated when the real hit-man (Dennis Hopper) arrives in town. This is a combo of a western and a thriller with a little film noir added in. The film has a ton of twists and turns, making it a little hard to understand at the beginning, but by the end of the movie, everything makes sense. J.T. Walsh makes an outstanding villain, and Hooper is perfect as the quirky hit-man. There is great chemistry between Boyle and Cage, which makes us want to root for the two of them. If you love the classic 40’s film noir movies, this one is for you.  My Rating: Full Price   Red Rock West Info

Weird Credits: From the credits of Why Him?:  Trainer of Domestic Livestock

Coming Soon to a Theatre Near You:  The Salesman  (2016)  PG-13  The story of a couple whose relationship goes wrong while they are performing Arthur Miller’s Death of a Salesman. The film comes from the Oscar-nominated director of About Elly and A Separation.   The Salesman Website