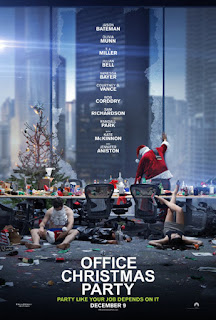 My View:  Office Christmas Party  (2016)  R  When the CEO (Jennifer Aniston) tries to close the company branch that her hard-partying brother (T. J. Miller), he and his Chief Technical Officer (Jason Bateman) decide to host the office Christmas party to end all parties. If the clients have a good time, it just might save the branch office. In the hands of Judd Apatow, this might have been a funny film but it’s written by two screenwriters that have never written a feature-length film, and it shows. This should have been a wild ride, but instead, we get the same old cliches, a plot that is easy to figure out and very unfunny jokes. Add to the fact that this movie is 105 minutes long, and it makes it a very slow watch. When the outtakes during the credits aren't funny, you know the film is in trouble.    My Rating: Cable   Office Christmas Party Website

Indiefest:  Miss Sloane  (2016)  R  Elizabeth Sloane (Jessica Chastain) is considered the best and most formidable lobbyist in Washington D.C. She decides to take on the most powerful opponent of her career, the “gun lobby.” Just how far is Elizabeth willing to go to win? This is a satisfying political thriller that will keep you guessing until the end. Chastain commands the screen as the tough-as-nails lobbyist, and it’s her remarkable performance that makes this film worth watching. I especially enjoyed John Lithgow, who plays a slimy senator and Sam Waterston, head of the lobby group who represents the gun lobby. While not Oscar material like All the President’s Men, this film is still an excellent suspenseful movie with a sterling performance by Jessica Chastain.    My Rating: Full Price   Miss Sloane Website

Indiefest:  Things to Come  (2016)  PG-13  Nathalie (Isabelle Huppert) is a married woman who works as a philosophy teacher. In a short amount of time, she goes through some troubling events that tests her will and faith. Huppert is brilliant in scene after scene as Nathalie's life slowly falls apart at the seams. She experiences almost every emotion in this movie, and it's her skill as an actress that she can move so quickly from being calm and composed to someone who is full of fury in a matter of seconds. It's the quiet, introspective moments in the film where Huppert shines, giving us time to absorb what Nathalie is going through and seeing how she deals with all that life is throwing at her. Things to Come is an intelligent look at a woman hit with many obstacles as she works to find her way in an ever-changing world. The film explores how we handle those barriers and the changes that it forces on us, for better or worse.   My Rating: Full Price   Things to Come Website

In Case You Missed It (A Film Just Released on DVD/Blu-ray):   The Secret Life of Pets  (2016)   PG   Max (Louis C.K.), a Terrier, is living the good life. He has an owner, Katie (Ellie Kemper), who spoils him.  He has great friends like Gidget (Jenny Slate) whom he talks to on a daily basis. That all changes when Katie brings home another dog named, Duke (Eric Stonestreet).  Now Max is going to have to show Duke that he is running the show in this apartment. I enjoyed this film, though I must say that some of the best bits in the film already have been seen in the trailer. The plot gets a little bogged down in too many storylines, but there are plenty of jokes to keep the film from slowing down too much. The film has a fantastic cast with Jenny Slate as the over anxious Gidget and Eric Stonestreet as the bumbling Duke. Kids and adults will have fun with this movie.    My Rating: Bargain Matinee   The Secret Life of Pets Website

Forgotten Film:  The Parallax View  (1974)  R  A reporter (Warren Beatty) gets in trouble while investigating a senator’s assassination.  He discovers that a multinational corporation is behind the event, and their hands are dirty for more than just the killing.  This is a classic suspense political thriller in the vein of Alfred Hitchcock. There are plenty of twists and turns to keep you guessing, right up to the end. Beatty gives one of his best performances as the reporter who won’t give up the story, even when threatened with death.    My Rating:  Full Price   The Parallax View Info

Weird Credits:  From the credits of Things to Come:  Personal Dresser to Isabelle Huppert

Coming Soon to a Theatre Near You: 20th Century Women  (2016)  R  The story of three women (Annette Bening, Elle Fanning, Greta Gerwig) who go off to explore love and freedom in 1970s Southern California.  I’ll see anything that Greta Gerwig is in, and many critics are saying Bening gives a performance that could get her an Academy Award nomination.   20th Century Women Website 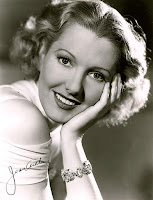