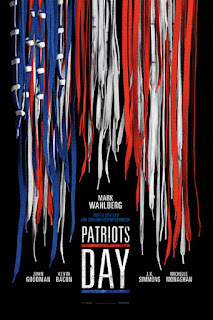 My View:  Patriot’s Day  (2016)  R  The events leading up to and the aftermath of the Boston Marathon bombing are showcased in this film. A city cop (Mark Wahlberg) is determined to find the men responsible for hurting so many people and will stop at nothing to find them as a city is  stunned by the brutal act. This is a moving film that, at times, due to the violence committed, is tough to watch. The movie is bolstered by brilliant performances from John Goodman as the Boston Police Commissioner and J.K  Simmons as a small town police chief. The film does an outstanding job of using some of the real footage of the bombing, blending it in with the re-creation of the event. The film, while it does show the terrorists, focuses more on not just the attempt to find the men responsible, but how ordinary people responded to the event and its aftermath. The ending of the film is one of the best things about this movie, with its message that love is how we will overcome these attacks on our homes and lives.  My Rating: Full Price   Patriot's Day Website
Disclosure: I work for a CBS owned station and this film is distributed by CBS Films.

My View:  Live by Night  (2016)  R  Set in the prohibition era, Joe (Ben Affleck) is sent by the mob to the Tampa Bay area to run their rum-running organization. There he encounters Graciela (Zoe Saldana) who helps him take over the town, but Joe’s enemies of the past may just catch up with him. This film is beautifully shot, perfectly capturing the mood and look of the 1920’s, but the film feels almost empty, even though it is over two hours long.  The film moves slowly, and Affleck, who wrote and directed the film, doesn’t seem to be too interested in playing his part of the hoodlum with a heart of gold. The action sequences are confusing as it’s hard to tell who is who when the gunfire starts.  I have loved some of Ben Affleck’s previous films, especially The Town (2010) and Argo (2012), but this movie feels lifeless and predictable.   My Rating: Bargain Matinee   Live by Night Website

My View:  The Bye Bye Man  (2017)  PG-13  Three friends (Douglas Smith, Lucien Laviscount, Cressida Bonas) move into an old, off-campus house.They soon discover that their house is haunted by the Bye Bye Man, a mysterious figure who just might be the root cause of the evil behind man’s most unspeakable acts. I have seen better student films than this mess of a movie. The special effects look like they were created for a 1960’s TV show. The acting is some of the worst I’ve ever seen, with Cressida Bonas particularly standing out. Her scenes are just painful to watch.  It’s sad that Faye Dunaway, an Oscar-winning icon, has to stoop this low to be in this film. The plot is predictable, and the few scary moments only happen because something or someone jumps out of the dark. I wanted to say “Bye Bye Man” in the first fifteen minutes so that he would come and take me out of my misery.   My Rating: You Would Have to Pay See Me to See it Again   The Bye Bye Man Website

Indiefest:  Elle  (2016)  R  Michele Leblanc (Isabelle Huppert) is a businesswoman who, one day, is violently attacked and raped by a masked assailant. Michele makes it her mission to find out who the rapist is and get her revenge. Let me be upfront right from the start, you are not going to like Michele or the decisions that she makes. This is an audacious film that jumps back and forth between grim drama and almost lighthearted comedy. The reason to see this film is Huppert’s performance and the determined businesswoman who is driven to find the masked assailant. It’s an unnerving portrayal that only someone as skilled as Huppert could pull off.  Elle is a film that will keep you guessing until the end, and it will continually shock you as the story unfolds.   My Rating: Full Price   Elle Facebook Page

Indiefest:  Paterson  (2016)  R  Paterson (Adam Driver)is a bus driver in the city of Paterson, New Jersey. His days are very simple, driving a bus, writing poetry in a notebook and stopping at his local bar for a beer. His girlfriend, Laura (Golshifteh Farahani) has big plans that are ever-changing. Somehow, this couple makes it work as Paterson observes his city from the bus driver’s seat. Paterson is a sweet, delightful film that looks at life in small-town America through the eyes of a man who loves his life and poetry. Writer/director Jim Jarmusch brings a small sample of the blissful life that Paterson and his wife live, a couple happy to celebrate the little moments in their lives. Adam Driver gives a wonderfully understated performance as a man who is content in his life and his work. Driver and Golshifteh Farahani, as his wife, play off each other with outstanding chemistry, as he lets his character’s delight show as his wife tells him of her new art project or dinner invention. You will enjoy spending seven days with Paterson, so much so, that you will wish once the movie ends that you could extend your stay for another week.    My Review: Full Price   Paterson Facebook Page

Forgotten Film:  The Mighty  (1998)  PG-13  Max and Kevin make an unlikely pair of friends.  Max (Elden Henson) is a big kid who gets constantly picked on by his classmates. Kevin (Kieran Culkin) has Morquio’s syndrome, where the bones stop growing but the organs continue to develop.  This is a delightful family friendly tale of friendship and healing. The cast is outstanding including a splendid performance by Sharon Stone as Kevin’s mother and Gena Rowlands as Max’s grandmother who is forced to raise him when Kevin’s father (James Gandolfini) is convicted of killing Kevin’s mom. The message of the film is perfect for kids to experience as Max and Kevin prove that our weaknesses can become our strength’s if we just work together.  My Rating: Full Price   The Mighty Info

Weird Credits:  From the credits of The Bye Bye Man:  Gloomsinger Animal Handlers

Coming Soon to a Theatre Near You: The Founder (2016) PG-13   The story of Ray Kroc (Michael Keaton), who started a little hamburger business called McDonald's. I hear great things about Michael Keaton’s performance. The film was written by Robert Siegel, who wrote The Wrestler (2008) and directed by John Lee Hancock, who directed The Blind Side (2009).    The Founder Website 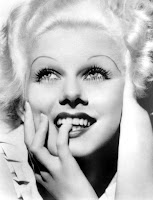