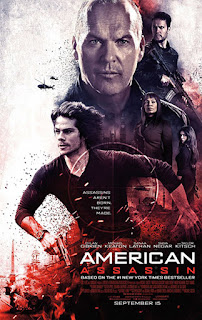 My View:  American Assassin  (2017)  R  Michael Rapp (Dylan O’Brien) is recruited to become black ops for the CIA. He and his trainer, Stan Hurley (Michael Keaton), set out to stop a mysterious operative nicknamed, Ghost (Taylor Kitsch), who is set on starting a world war in the Middle East.  I liked the action sequences in this film which are well done and exciting. Dylan O’Brien makes for a sterling young hot-head agent, and Michael Keaton as the gruff CIA Black Ops chief is fun to watch because he is obviously enjoying this role. What I didn’t like about this film is that it seems even longer than its almost two-hour length, and I hated the way over-the-top performance of Taylor Kitsch, who plays the ex CIA agent called, Ghost, and who is determined to get revenge. I never got the feeling that he was dangerous, just that his character was crazy. As exciting that the fight sequences are, there are some car chases that are just downright boring. This film is based on a series of books by Vince Flynn, which the studio is hoping will be a franchise like the Jason Bourne or Jack Reacher films, but I doubt we will see any more of this series because this movie misses the mark.    My Rating: Bargain Matinee   American Assassin Website  Note: This film is released by CBS Films and I am employee of CBS Television Station Group.

Indiefest:  First They Killed My Father  (2017)  R  Cambodian author and human rights activist Loung Ung recounts her life under the rule of the Khmer Rouge.  This is a stunning and touching film about a young girl who, under horrible conditions, never loses her humanity. Co-writer/director Angelina Jolie brings us a true tale of the unspeakable suffering that the Cambodian people endured under the rule of the Khmer Rouge. This is Jolie’s best work, and the care and affection she shows on the screen for the people of Cambodia and Loung Ung  (Sareum Srey Moch), in particular, is immense. Sareum Srey Moch is dazzling in the role of a little girl who is forced to grow up much too soon, bringing an emotional performance to the screen that is worthy of someone three times her age. Jolie has written this film with an emphasis on seeing the journey through the eyes of Loung Ung, and our heart breaks throughout the film as she struggles to survive an unjust world. I will warn you that there are several very graphic scenes of people dying in fire fights, but that’s Jolie’s intention as she wants to portray war as an ugly, dirty thing, and that families suffer the most during those times.    My Rating: Full Price   First They Killed My Father Website

Indiefest:  mother!  (2017)  R  A couple’s (Jennifer Lawrence, Javier Bardem) love is tested when uninvited guests arrive at their home, disrupting their lives forever. This is a trippy and strange film that not everyone will enjoy. This is unlike the usual Jennifer Lawrence film, it’s a movie that is an allegory, so it isn’t rooted in reality. The film is beautifully shot, and I loved all the sounds that this movie has, so make sure that if you want to see this film, see it in a theatre. The film is hard to watch at times, and there are a couple of scenes that are just brutal to watch. This is defiantly a movie that will have you talking about it for a long time after you leave the theatre. Lawrence and Bardem are brilliant in the roles and have incredible chemistry on the screen. mother! is a film that will cause you to think and try to figure out just what it all means. Sometimes we need that in a film, something to make you think instead of just reacting.   My Review:  Full Price   Mother! Website

Forgotten Film:  Mean Streets  (1973)  R  Two small time hoods (Robert De Niro, Harvey Keitel)  are trying to move up in the mob from the streets of New York City’s Little Italy. Both men are destined to a sad and violent end. Robert De Niro, as the psychotic, troubled gangster, Johnny Boy, is mesmerizing in the role. His performance is riveting, and you can’t take your eyes off of him as he gives it all on screen. Keitel, as the hood with a heart, is just as spellbinding in his role. This is a gritty, tough film that set the definition for mob movies and is a treasure to watch.   My Rating:  I Would Pay to See It Again   Mean Streets Website

In Case You Missed It (A Film Just Released on DVD/Blu-Ray): Paris Can Wait  (2017)  PG  The wife (Diane Lane) of a successful movie producer takes a car trip from the south of France to Paris with one of her husband’s associates (Arnaud Viard ). To say that they are going to take the scenic route would be an understatement. If you are a foodie, this is the film for you. The couple takes a leisurely trip through France, centering their journey on the fine cuisine of the country.  Lane’s character loves food, so much so, that she takes endless pictures of her plates, and we see the results (some of which could grace the cover of Bon Appetit magazine). Lane and Viard play off each other extremely well, and there is quite a bit of sexual tension between the two that builds to the very end. The scenery is beautiful, and the food looks almost too beautiful to eat. If you want to imagine dining your way across France, this film isn’t a bad way to go.  My Rating: Bargain Matinee   Paris Can Wait Website

In Memory of Ed Wood (A Movie I've Only Seen in Trailers But Just Looks Like a Bad Idea):  Daddy’s Home 2 (2017)  Brad (Will Ferrell) and Dusty (Mark Wahlberg) must deal with their fathers (Mel Gibson, John Lithgow) during the holidays. I hated the first film, so why would I want to see a sequel?   Daddy's Home Facebook Page 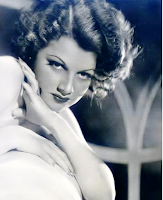