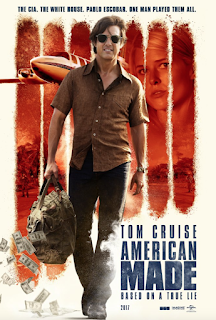 My View:  American Made  (2017)  R  Barry (Tom Cruise) is a former TWA pilot who became a spy plane pilot for the CIA and a drug smuggler for the Medellin Cartel in the 80s. To avoid being put in jail, he turns informant for the DEA. This film is much funnier than I thought it would be, with some hilarious sequences. At one point, Barry has so much money that, when he digs a hole in the backyard to bury the money, he digs up a bag that he had already hidden. I liked Tom Cruise’s performance though I felt it was rather easy for him to do the role, playing a guy wjp gets by using his looks and has the ability to talk his way out of sticky situations. The rest of the cast is outstanding, including Domhnall Gleeson, who plays Barry’s CIA handler, and Sarah Wright, who plays Barry’s put-upon wife. Caleb Landry Jones gives his usual creepy vibe in the role of the dimwitted brother of Barry’s wife. This film wants to be on the level of ‘The Wolf of Wall Street,” but it just doesn’t have enough. I think you can blame that on Tom Cruise because he won’t play a role where you don’t like his character. For example, this is the first R rated film that Cruise has been in since Tropic Thunder which was almost ten years ago. Overall this is an enjoyable film, but if it had been grittier, it would have been a better film.    My Rating: Full Price   American Made Website

My View:  Battle of the Sexes  (2017)  PG-13  This film is loosely based on the 1973 tennis match that all America watched between Bobby Riggs (Steve Carell), an aging huckster who used to be a great tennis star, versus Billie Jean King (Emma Stone), the best woman tennis player of all time. This is two films in one; the story of how the most watched tennis match of all time happened, and the slow realization by Billy Jean King that she is a lesbian. I enjoyed this film because I am old enough to remember the match, and the look and feel of the early 70s is perfectly captured. The film does a superlative job of mixing in actual footage from the match, including showing Howard Cosell on-screen with Natalie Morales, who plays tennis player Rosie Casals. Steve Carell is brilliant as the bombastic Bobby Riggs, who was a man who lived to gamble. In contrast to Carell’s over-the-top Riggs (warranted because that’s how Bobby Riggs acted), Emma Stone gives a quiet but convincing performance of a woman who dared to take on the world to get women’s tennis the prize money and notoriety they deserved. The film feels a little long because it spends so much time on King’s awakening to her true feelings. There are too many scenes of her exchanging glances with the hairdresser (Andrea Riseborough) whom she eventually falls in love with. Overall, buoyed by the spectacular cast, Battle of the Sexes is an interesting look at a time when a tennis player changed her sport through her toughness and determination.   My Rating:  Full Price   Battle of the Sexes Website

Indiefest:  Woodshock  (2017)  R  After helping her terminally ill mother commit suicide, Theresa (Kirsten Dunst) finds comfort in the reality-altering effects of a potent cannabinoid drug.  I hated this film which is too artsy for its own good. The film spends lots of time with Dunst alone in her house, either being depressed or high on the drug, seeing colored lights on the walls or staring at herself in the mirror. Since she keeps taking the drug (some sort of liquid that she mixes with pot) we never know what scenes are real and what scenes are just in her head. I have no idea what the point of this film was and why an actress of Kirsten Dunst’s level would take the part. Much like the movie itself, it’s a mystery that won’t be solved.   My Rating: You Would Have to Pay Me to See it Again   Woodshock Website

Indiefest:  Trophy  (2017)  This documentary looks at the industries of big-game hunting, breeding and wildlife conservation in the U.S. and Africa. Trophy sometimes was difficult to watch (lots of animals are killed on screen) and is maddening because there isn’t an easy solution to the problem of extinction. The fascinating part of this film is it doesn’t judge, just presents all the sides; the hunter that feels he is a conservationist, the rhino rancher who wants to sell the horns to support his farm, the big game rancher who raises animals to be killed and the people on the street that want to stop it all. The only group that the film does judge is the human race which through just being on the planet is causing wild animals to die at an alarming rate. I didn’t know much about big game hunting, but this film gave me a lot to think about.   My Rating: Full Price   Trophy Website

My View:  Flatliners  (2017)   PG-13  Five medical students become obsessed with what lies beyond when we die. They start experimenting on themselves by stopping their hearts for short periods of time. Each student has a different experience with the afterlife. The cast which includes Ellen Page, Diego Luna, and Nina Dobrev, tries to overcome a weak and bland script. The film relies on the jump out of the dark scares that just never work. Flatliners was supposed to be a sequel, but it feels like a watered down remake that brings nothing new or original to the storyline. This film is a waste of an excellent cast, in fact, it’s just a waste of time.   My Rating: Cable    Flatliners Facebook Page

Forgotten Film:  The Getaway  (1972)  PG  A recently released ex-con (Steve McQueen) and his loyal wife (Ali MacGraw) go on the lam after a heist goes wrong. This film has a bunch of flaws in the script but is worth seeing for two reasons: the chemistry between McQueen and MacGraw is so good it almost steams up the screen, and there is a brilliant chase sequence on a train that is a master class in how to direct action sequences.   My Rating: Bargain Matinee     The Getaway Info

Weird Credits:  From the Battle of the Sexes:  Tennis Double

Coming Soon to a Theatre Near You:  Marshall (2017)  PG-13  The story of Thurgood Marshall (Chadwick Boseman), who became the first African-American Supreme Court Justice. We follow him when he is a young man as he battles through one of his career-defining cases.   Marshall Facebook Page 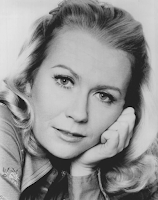