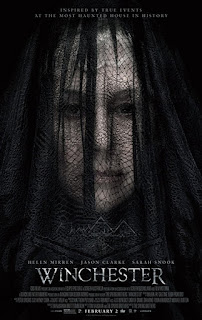 My View:  Winchester  (2018)  PG-13  An eccentric firearm heiress (Helen Mirren) believes she is haunted by the souls of people killed by the Winchester repeating rifle. I was hoping because it is based on a true story and it has Helen Mirren in it that it would be good. Instead, we get a rather ordinary jump out of the dark, scary movie. Mirren is ok in the role, but I would have liked her to camp it up a bit just to make the storyline more interesting. The special effects are few and far between, though I did enjoy the house (which is still around and a big tourist draw) which is full of dead ends and staircases that go nowhere, much like this film.  My Rating: Cable   Winchester Website
Full disclosure: This film is released by CBS Films and I work for a CBS owned station.

In Case You Missed It (Movies just released on DVD/BluRay):  Professor Marston and the Wonder Women  (2017)  R    The true story of psychologist William Moulton Marston (Luke Evans) who was in a polyamorous relationship with his wife (Rebecca Hall) and his mistress (Olive Byrne). Marston went on to create the legendary and controversial (for its time) comic book character Wonder Woman. This is a movie about the choices we make in our relationships and how those choices sometimes take great courage to make. This film isn’t for everyone as it contains a bit of nudity, along with some bondage. I liked Hall and Evans’ performances, but it’s Rebecca Hall who makes this film worth watching. Playing the hard-headed, opinionated, and brilliant wife, Hall dominates every scene that she is in. I think you will be shocked at Marston’s ideas that he incorporated into his creation of Wonder Woman. This is a complex, moving tale about the exploration of what love means and if it, indeed, can conquer all that life gives us.   My Rating:  Full Price   Professor Marston and the Wonder Woman Website

In Memory of Ed Wood (A Movie I've Only Seen in Trailers but Just Looks Like a Bad Idea): Sherlock Gnomes  (2018)  The garden gnomes, Gnomeo & Juliet are back, and this time they get the help of detective Sherlock Gnomes to find out what happened to the other lawn ornaments in the yard that went missing. I heard the first one was pretty bad, so I doubt a sequel will be any better.   Sherlock Gnome

Forgotten Film:  The Late Show (1977)  PG  An old, retired Private Investigator (Art Carney)decides to take on one last case - find the lost cat of a woman (Lily Tomlin). While searching for the cat, the P.I. gets involved in solving a robbery and a murder. Part comedy, part crime drama (there is quite a bit of violence) this film is a blast to watch and will keep you guessing up until the end. Tomlin and Carney work off each other brilliantly, and the dialogue is smart and, at times, hilarious. While an amusing film, The Late Show also captures the look and feel of the classic gumshoe crime films of the 40’s and 50’s.  My Rating: Full Price    The Late Show Info

Weird Credits:  From the credits of Winchester: Stand By Props Assistant: Casual

Coming Soon to a Theatre Near You:  I Kill Giants  (2018)  Barbara (Madison Wolfe) is a young loner who struggles through life by escaping into a world of magic and monsters. Barbara is convinced that her town is going to be attacked by giants. The question is, is Barbara crazy or does she know something that no one else knows?  The trailer looks phenomenal, and it has one of my favorite actresses in it, Zoe Saldana.   I Kill Giants Info 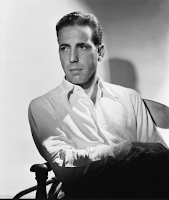