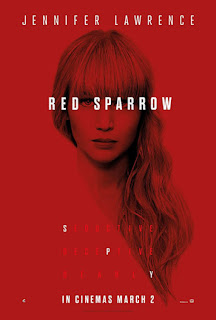 My View:  Red Sparrow  (2018)  R  Ballerina Dominika Egorova (Jennifer Lawrence) is injured in a freak accident. Her dancing career is over, and she is forced to join the “Sparrow School,’ a Russian intelligence service where she is forced to use her body as a weapon. Her first mission is to seduce an American CIA agent (Joel Edgerton). When the mission starts to unravel, it just might threaten the security of both countries. If you think you are going to see something like last year’s Atomic Blonde, you aren’t. While a violent film with a couple of very hard to watch torture scenes, this is more of a movie about the psychology of breaking people down to become someone who will do anything for their country. The film is too long (two hours, twenty minutes), and the storyline, while it has some nice twists and turns, is too slow. Lawrence doesn’t do a Russian accent well, to the point that it just gets distracting. While Atomic Blonde was a blast to watch, I was either revolted at the torture or bored by the countless talking head scenes. I did enjoy the all too brief part that Mary-Louise Parker has as a wisecracking chief of staff of the American Embassy. She breathed life into the film, but her part was too short to save this film.   My Rating: Cable   Red Sparrow Website

Indiefest:  The Party  (2018)  R  Janet (Patricia Clarkson) is hosting a party to celebrate her new promotion, but once the party starts, it’s very apparent that not everyone is in a celebratory mood. I didn’t enjoy this film because it felt like I was watching a stage play (I was shocked to find that it wasn’t based on one). The film feels stiff and unnatural with the characters spewing out dialogue that doesn’t feel real. I did enjoy the performance of Patricia Clarkson, who commands the screen in every scene she is in. I especially didn’t enjoy the performance of Timothy Spall, whose character almost doesn’t say a word until near the end of the film. It’s a bizarre film that, all I can say in its favor, is that it is only 71 minutes long.   My Rating: Cable   The Party Website

Indiefest:  The Vanishing of Sidney Hall (2017)  R   After publishing a bestselling novel based on the death of one of his high school classmates, the controversial writer Sidney Hall (Logan Lerman) finds himself catapulted to unexpected fame and renown. His relationship with his girlfriend (Elle Fanning) begins to fall apart as the dark consequences of the book intrude on their life together, and he disappears without a trace. Nearly a decade later, an enigmatic detective searches for the missing author, whose books are connected to a string of mysterious arsons. Part drama, part romance with a bit of mystery, and this film was enjoyable to watch. The film goes back and forth in time, from the high school days of Sidney, where he meets his girlfriend, to the present where a police officer (Kyle Chandler) is trying to track down Sidney, to a few years ago in New York when everything should have been great for Sidney but wasn’t. Lerman and Fanning have fantastic chemistry on the screen, and I loved their initial courtship. The film will keep you guessing about how it’s going to end with plenty of surprises that aren’t fully answered until the final scenes.    My Rating:  Full Price    The Vanishing of Sidney Hall Facebook Page

My View: Death Wish  (2018)  R  Dr, Paul Kersey (Bruce Willis) is used to seeing the day to day violence that goes on in the city as he works in the ER. When his wife (Elisabeth Shue) and daughter (Camila Morrone) are viciously attacked in their suburban home, Paul decides to take matters into his own hands and get revenge. The original 1974 film starring Charles Bronson was a lousy film but captured the attention of a nation due to its violence. This film isn’t much of improvement. There is a horrible sequence to AC/DC’s Back in Black, which compares side by side Willis performing surgery and cleaning his gun. The storyline is predictable and at times boring. The scary thing is that during my screening a couple of audience members clapped when one of the bad guys was killed by the doctor. The violence is pretty horrific, and there is a pretty ugly torture sequence, so be warned if you are squeamish. When is Hollywood going to learn that remaking a bad film will just give you another bad film?     My Rating: Cable   Death Wish Website

Forgotten Film:  Cutter’s Way  (1981)  R  Alex Cutter (John Heard) is a Vietnam vet who has come back an injured and angry man. His only friend, Richard Bone (Jeff Bridges), witnesses someone dumping a murdered young girl’s body in an alley. Cutter decides to embark on a crusade to find the killer with the help of his friend, Bone. Heard and Bridges play off each other with gusto, and Heard gives an intense performance that keeps the film moving. This is the type of film that just isn’t made anymore - a smaller film that has real characters that make you want to root for them.    My Rating: Full Price   Cutter's Way Website

Coming Soon to a Theatre Near You:  Thoroughbreds  (2017)  R  Two upper-class suburban Connecticut teenage girls ( Anya Taylor-Joy, Olivia Cookein) rekindle their friendship after being estranged for years. Together, they hatch a plan to solve both of their problems by any means necessary. The trailer looks riveting, but I really want to see this film because it’s one of the last films done by the late Anton Yelchin.   Thoroughbreds Info 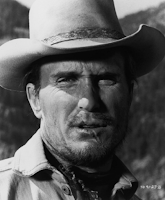