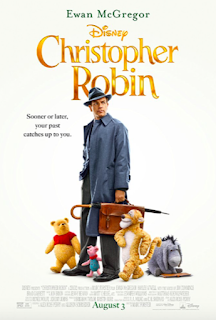 Family Faire:  Christopher Robin (2018)  PG  Christopher Robin (Ewan McGregor) is grown up and has a family. His old friend Winnie-the-Pooh visits his old friend Christopher Robin and helps him find the joy in his life that he has been missing. When I was growing up, one of my favorite books was Winnie-the -Pooh which I read over and over. So going into this live-action family film, I was a little worried that it wouldn’t live up to the source material. While extremely slow starting, having a plot that is simplistic and predictable, the film does capture the essence of Pooh, Christopher Robin and the rest of the 100-acre forest. While at times I think both parents and children will be bored, when Pooh and his friends are on screen, everyone will have a good time. I loved the voice cast of the film, with Jim Cummings doing a magical job with Winnie and Tiger, Brad Garrett voicing Eeyore, Peter Capaldi voicing Rabbit and Toby Jones voicing the wise old Owl. Take your family and spend a couple of hours reliving your childhood, and maybe you will find some magic again as Christopher Robin does.  My Rating: Bargain Matinee   Christopher Robin Website

My View: The Spy Who Dumped Me  (2018) R  Audrey (Mila Kunis) and Morgan (Kate McKinnon) are best friends who become caught up in an international conspiracy when they discover one of their ex-boyfriends is a spy. This more a spy film than a comedy, in fact, there is very little comedy in this film, as I only chuckled once during the whole movie. Kunis looks uncomfortable working with McKinnon, who looks like she ab libbed a lot of her part. I like McKinnon on SNL but those are short sketches, and a little of McKinnon goes a long way, especially when she starts mugging for the screen. The plot is predictable (I came up with what would have been a great twist but the writers with the obvious choice) and the situations that the film puts the two women in are just plain stupid. There is a reason why this film wasn’t screened for critics, it is because it’s a lousy movie that feels every bit of its almost two-hour length.  My Rating: You Would Have to Pay Me to See it Again   The Spy Who Dumped Me Website

In Case You Missed It (A movie just released on DVD/Blu-Ray):  Tully (2018)  R  Marlo (Charlize Theron) is a mother of three including a newborn, and Marlo is about at the end of her rope. She is gifted a night nurse named Tully (Mackenzie Davis) by her brother. Tully is the godsend that Marlo needs. Tully is the third collaboration between director Jason Reitman and writer Diablo Cody. While I am a huge fan of their first film, Juno (2007), I never warmed up to their 2nd film, Young Adult (2011). I am happy to say that third time’s a charm, as Tully is witty, funny and overall moving…and packed with a few surprises. The cast is superb, led by Charlize Theron’s Marlo, a performance that could get her an Academy Award nomination. We forget just how good Theron’s comedic timing is, and she uses it to perfection in this film. Theron’s on-screen chemistry with Davis is sublime and makes this film so enjoyable to watch. While not entirely on the level of the brilliant Juno, Tully still is a film not to be missed. It’s a hilarious film that any mother can relate to. Now, if every mother could just get someone like Tully to help her out…   My Rating: I Would Pay to See it Again   Tully Website

In Memory of Ed Wood (A Movie I’ve Only Seen in Trailers but Just Looks Like a Bad Idea):  A.X.L.  (2018)  PG  A.X.L. stands for Attack, Exploration, Logistics, which is a top-secret, robotic dog designed to help soldiers in tight situations. When the experiment goes wrong, A.X.L. is discovered in the desert by Miles (Alex Neustaedter), and they develop a bond. The scientists are out to find and destroy A.X.L. by any means necessary. Instead of this horrible looking film, go and watch a sci-fi classic A Boy and His Dog, I can guarantee you will enjoy it more.   A.X.L. Website

Forgotten Film: Sunshine (2007)  R  Set in the year 2057, a group of international astronauts is sent on a dangerous mission to reignite the sun using a nuclear fission bomb. The film is stylishly directed by Danny Boyle, Sunshine is part Sci-Fi film, part psychological drama, and part horror film. The special effects are incredibly well done, but it’s the performances of the cast, especially Rose Byrne, Cillian Murphy and Chris Evans that make this film special. This is an intense film about how the strain of the world on their shoulders combined with the isolation the astronauts have to deal with can cause irreparable consequences.   My Rating: Full Price    Sunshine Info

Weird Credits:  From the credits of Christopher Robin:  Witness Camera

Coming Soon to a Theatre Near You:  BlackkKlansman (2018)  R  based on the true story of Ron Stallworth (John David Washington), the first African-American police officer in Colorado Springs. With the help of a white police (Adam Driver), Ron infiltrates the local Ku Klux Klan, becoming a confidant of the Imperial Wizard himself, David Duke (Topher Grace) and eventually becoming the leader of the local pack. I don’t always like Spike Lee’s films, they always make me think, and the trailer for this film looks incredibly impressive.   Blackkklansman Website 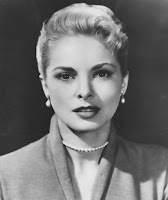 Email ThisBlogThis!Share to TwitterShare to FacebookShare to Pinterest
Labels: A.X.L, BlackkKlansman, Christopher Robin, Sunshine, The Spy Who Dumped Me, Tully