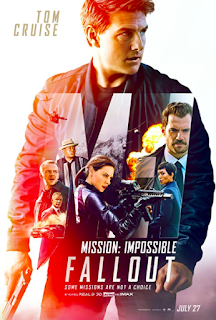 My View:  Mission Impossible: Fallout (2018) R  Ethan Hunt (Tom Cruise) and his IMF team have a mission go wrong, and now Ethan is a wanted man. The MI series just gets better with every film. What I love about this series is that it keeps upping the game, making the action sequences bigger and bigger. I’m not a huge Tom Cruise fan but he gives it his all, and it is evident that he does almost all his own stunts. The action sequences are some of the best I’ve ever seen and the last fifteen minutes of the film are on the edge of your seat amazing. The plot has plenty of twists and turns to keep you interested, and the film moves at a breathtaking pace. I can’t express how much fun watching this film is. Just go see it.  My Rating: I Would Pay to See it Again   Mission Impossible: Fallout Website

Familyfiare:  Teen Titans Go! To the Movies (2018)  PG  The five Teen Titans dream of Hollywood making a movie on their superhero antics. Robin (Scott Menville) must make a serious decision when a Hollywood director named Jade (Kristen Bell) decides she wants to make a film only about him. I went into this film knowing nothing about the Teen Titans and expected it to be another animated snooze fest. Instead, I encountered a delightful movie full of humor and fun. I was really surprised by this film, especially the sometimes really dark humor that fills this film. The film is a blast to watch, and adults will enjoy this film as much as their kid's will. My Rating:  Full Price   Teen Titans Go! To the Movies Website

Indiefest:  Blindspotting (2018) R  Collin (Daveed Riggs  and Miles (Rafael Casal) have been friends since their childhood. Colin has three days left on his probation, three days to stay out of trouble. The problem is that trouble just seems to follow everywhere Miles goes. The film moves defy between humor and seriousness. This is about friendship, race and the changing landscape of neighborhoods. Diggs and Casal have great chemistry on screen making this film work so well. This is a film that you will be thinking about long after you see it. My Rating; I Would Pay to See it Again   Blindspotting Website

Indiefest: Eighth Grade (2018) R  Kayla (Elsie Fisher) is all about blending into the woodwork so that she doesn’t stand out. All Kayla wants to do is survive the last week of the eighth grade so she can start high school on a clean slate. Life has decided that Kayla should come out of the shadows. Kayla decides to give advice on how to navigate life through a series of YouTube videos. I loved this film, and Elsie Fisher is a delight to watch on screen. Her performance is heartfelt and beautiful and writer/director Bo Burnham treats her with a loving touch. The film is filled with beautiful moments about an awkward kid trying just to survive one last week of school. This is a film that everyone will enjoy going into the last week of eighth grade with Kayla.  My Rating: I Would Pay to See it Again   Eighth Grade Website

Indiefest:  Love, Cecil (2017)  Documentary about Academy Award-Winning costume designer Cecil Beaton. Incredibly exciting documentary on the life of a fantastic man. Photographer, costume designer, artist, writer, Beaton was a man of many talents, and this film highlights them all. Known for his Academy Award-winning designs for My Fair Lady and Gigi, he was a man of many talents and led an extraordinary life. The film showcases his life which was filled with celebrities and full of amazing stories. My Rating: Full Price   Love, Cecil Website

Forgotten Film:  The Unbelievable Truth (1989)  R  A man (Robert John Burke) returns home after serving time for homicide. He begins a relationship with Audry (Adrienne Shelly) who is obsessed with the end of the earth ending due to a nuclear war. This little-seen film is one of the best romantic comedies of the eighties. The film is filled with extraordinary characters that make the world of ordinary seem special. This isn't a film for everybody, but if you enjoy unusual movies that don’t follow the usual script, this is a film for you.  My Rating: Full Price   The Unbelievable Truth Info

Coming Soon To a Theatre Near You: The Spy Who Dumped Me  (2018)  R  Audrey (Mila Kunis) and Morgan (Kate McKinnon) are best friends. They discover that Audrey’s ex is a spy and now the world depends on these two to  travel to Europe and save the world.  I loved the trailer, so I have high hopes for this film.   The Spy Who Dumped Me Website 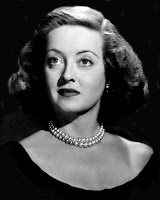