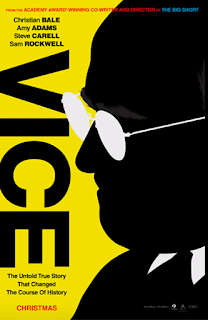 My View:  Vice  (2018) R   The story of Dick Cheney (Christian Bale) who rose from poverty to become a Washington insider, ultimately become the Vice President under George W. Bush (Sam Rockwell). Bale gives an incredible performance, becoming Cheney right before your eyes. This is from Adam McKay, who gave us the Oscar-winning The Big Short, and like that film, there is quite a bit of humor, including a running gag throughout the film that will have you rolling on the floor. I enjoyed this film, but the big problem with the film is that the main character holds everything very close to his vest, so it’s hard to know just what this character is thinking. I found Sam Rockwell portrayal of George W. Bush was just a little too cartoony for my taste. The actor, besides Bale, that stands out is Steve Carell, who is brilliant as the fiery Donald Rumsfeld. Amy Adams doesn’t have a lot to do as the wife of Cheney, Lynne.    My Rating: Full Price    Vice Website

Indiefest:  If Beale Street Could Talk  (2018)  R   A newly engaged and pregnant woman (Tish Rivers) in Harlem struggles to prove that her fiancé (Stephan James) is innocent of a crime. This emotional and stunning film is one of the best films of the year. Rivers and James give outstanding performances but the performance of Regina King, as James’s character’s mother is the best thing about this film. Although set in the 1970s, this film could easily be set in 2018, and its message would be the same. This is a magical film that everyone should see.   My Rating: I Would Pay to See it Again   If Beale Street Could Talk Website

My View:  On the Basis of Sex  (2018)  PG-13   Ruth Bader Ginsburg (Felicity Jones), along with her husband, Martin (Armie Hammer) begins a fight for equal rights for women that takes her all the way to the Supreme Court. I enjoyed this film, but it is kind of dull because the case that she presents is rather dull itself. I like Felicity Jones in the role of Ginsberg, as she gives some spunk and passion to the character. There is excellent chemistry with Hammer, who plays her loyal and devoted husband, who believes more in her than even himself. The film is a little slow moving but overall is enjoyable about a remarkable woman.    My Rating: Full Price   On the Basis of Sex Website

Forgotten Film:   The Apartment (1960)  A up and coming insurance worker, .C.C. Baxter (Jack Lemmon), to gain favor, lets his male co-workers use his apartment to have affairs. He is secretly in love with an elevator operator, Fran (Shirley MacLane), who is having an affair with the big boss of the company, Mr. Sheldrake (Fred MacMurray). When Mr. Sheldrake finds out about the C.C.’s apartment, he makes a deal with C.C. to get, but little does C.C. know that Mr. Sheldrake is romancing Fran. On Christmas Eve, Mr. Sheldrake breaks it off with Fran and Fran tires to commit suicide in C.C.’s apartment, with C.C. coming to rescue. While it doesn’t sound like it, this is one of the greatest comedies of all time. Directed by Billy Wilder, the film won five Oscars, including Best Picture and Best Actor/Actress.   My Rating: I Would Pay to See it Again   The Apartment Website

Weird Credits:  From the credits of Vice:  ADR Actor

Coming Soon to a Theatre Near You:  Glass  (2019)  PG-13  Three men are being held in a high-security mental institution: David Dunn (Bruce Willis) a former security guard who has somehow supernatural powers, Kevin (James McAvoy) a killer that has 24 personalities and a mysterious man named Mr. Glass (Samuel L. Jackson).  M. Night Shyamalan’s follow up to his 2016 hit Split. I love the trailer, I just hope this is as good as Split was.     Glass Website 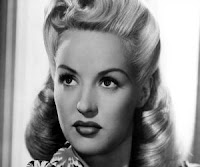 Email ThisBlogThis!Share to TwitterShare to FacebookShare to Pinterest
Labels: Christian Bale, Glass, If Beale Street Could Talk, On the Basis of Sex, Sam Rockwell, The Apartment, Vice