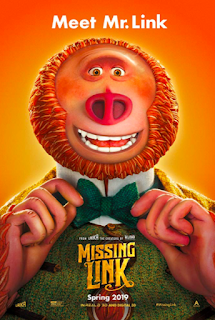 Family Faire:  Missing Link  PG  Mr. Link (voiced by Zack Galifianakis) is a Bigfoot who dreams of finding more like him. He convinces explorer Sir Lionel Frost (voiced by Hugh Jackman) to take Mr. Link to the fabled lost valley of Shangri-La, where it is rumored that it is inhabited by Yetis. With the help of a former flame of Sr. Lionel, Adelina Fortnight (voiced by Zoe Saldana), the three go on a trip halfway across the world. The animation studio, Laika Entertainment, who did Kubo and the Two Strings (2016) and Coraline (2009), do some brilliant stop-motion animation and this film looks amazing. The stop motion is so smooth it looks drawn. The story is warm and funny and Mr. Link, who later decides his first name is Susan, is just plain fun. It’s a silly movie but there is nothing wrong with that. Take the kids, they will have a blast and you just might end up having fun too.  My Rating: Full Price   Missing Link Webste

In Case You Missed It (A movie just released on DVD/Blu-Ray):  Vice  (2018) R   The story of Dick Cheney (Christian Bale) who rose from poverty to become a Washington insider, ultimately become the Vice President under George W. Bush (Sam Rockwell). Bale gives an incredible performance, becoming Cheney right before your eyes. This is from Adam McKay, who gave us the Oscar-winning The Big Short, and like that film, there is quite a bit of humor, including a running gag throughout the film that will have you rolling on the floor. I enjoyed this film, but the big problem with the film is that the main character holds everything very close to his vest, so it’s hard to know what this character is thinking. I found Sam Rockwell portrayal of George W. Bush was just a little too cartoony for my taste. The actor, besides Bale, that stands out is Steve Carell, who is brilliant as the fiery Donald Rumsfeld. Amy Adams doesn’t have a lot to do as the wife of Cheney, Lynne.    My Rating: Full Price    Vice Website

In Memory of Ed Wood (A Movie I've Only Seen in Trailers but Just Looks Like a Bad Idea):  Aladdin  (2019)  PG   A street urchin and a Grand Vizier vie for a magic lamp that has a genie in it that will give its owner incredible power. The Disney animated was good but is terribly dated. The trailer for this film looks horrible and Will Smith as the genie looks uncomfortable, the rest of the cast is 2nd rate.    Aladdin Website

Forgotten Film:  The Transformers: The Movie  (1986)  PG  Considered by most Transformer fans the best Transformers film (including the Michael Bay films), this animated film has the Autobots fighting on two fronts: against a colossal planet consuming robot and of course, the Decepticons. The film has a very strong voice cast, including Orson Welles in one of the last acting jobs he did before he died. This film is really dark and well made. I just wish the Michael Bay films had this kind of writing.  My Rating:  Full Price    The Transformers Info

Weird Credits:  From the credits of Missing Link:  Hair and Fur Fabricator 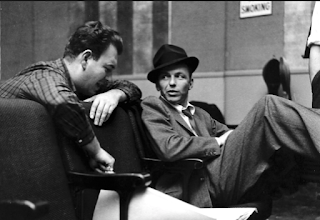