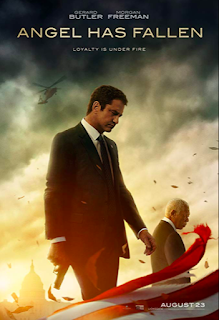 My View: Angel Has Fallen (2019) R Secret Service Agent Mike Banning (Gerard Butler) is on the run after being framed for the attempted assassination of the President (Morgan Freeman) and now he has to evade his own agency and the FBI to try and find out who is behind the assassination attempt.  I liked the action sequences but the plot is incredibly dull and implausible. If our Secret Service and the FBI are this dumb in real life than we are in a lot of trouble. Past of the Olympus Has Fallen series, this film feels like it’s a plot that the writers lifted off some old 90’s cop series. Butler is ok in the part but the rest of the cast looks like they are sleepwalking through the film. Skip this film and go see anything else that is coming out this week. Note: There is a bonus clip after the first round of credits.   My Rating: Cable    Angel Has Fallen Website

My View: Ready or Not  (2019) R  A bride, Grace(Samara Weaving), is told that she must participate in a game of hide and seek before coming a part of the grooms family. What she doesn’t know is if they find her in the family home before sunrise, she will be killed. This film is the perfect example of the definition of a ‘dark comedy,’ a film that makes light of a subject that is generally considered taboo. In this case, the family that is hunting her is made up of a bunch of crazy individuals, all who believe that if they don’t kill Grace, something horrible will happen to the family. You will be laughing one moment at the ridiculous events that occur and other moments you will be scared at the jump out of the dark moments in the film. This film does a good job of building the tension until the end of the film. The film is made by the performance of Sara Weaving, who shows she has the chops for both comedy and drama, all in one character. Weaving is a delight to watch on the screen as she starts out the innocent bride, then turns into a victim who is running for her life, and finally, an in your face antagonist who is willing to fight for her life. Go see this film, it’s so much fun to watch and the audience I saw it had as good a time watching it as I did.   My Rating: Full Price    Ready or Not Website

Indiefest: David Crosby: Remember My Name (2019) R  Documentary on the life and music of David Crosby, a founding member of Crosby, Stills, Nash, and Young and a member of the Rock in Roll Hall of Fame. This is a documentary about a very unhappy musician who has undermined almost every relationship he has had, survived a drug addiction that should have killed him ten times over and is about a man who knows he is on borrowed time, determined to play as much music as he can before he is gone. I have always enjoyed David Crosby’s music, especially when he was with CSNY and CSN but man, after watching this film, I don’t like the man. He has lived his life selfishly, always thinking he was right and everyone else was wrong. Other than the wonderful music and some great behind the scenes shots of his early career, this is not an easy film to watch. By the end of the film, you want to slap David and tell him to go apologize and makeup with all the people that you wronged. The problem is, you know he will never do that.   My Rating: Bargain Matinee David Crosby: Remember My Name Website

Indiefest: After the Wedding (2019) PG-13  A manager of an orphanage in Kolkata, Isabel (Michelle Williams) travels to New York City to meet with a possible benefactor (Julianne Moore). The benefactor invites Isabel to her daughter’s wedding, so they can get to know each other better before the benefactor makes her decision. Little does Isabel know that when she accepts the infestation, her past will rear its ugly head. I liked the two performances of Williams and Moore (who wouldn’t), but this film left me wanting more of an emotional punch. I never really connected with either character and had a hard time understanding their feelings and cations throughout the film. To put it bluntly, the film lacks heart, it all substance on the top but underneath, there is nothing to support the film by connecting with the audience. A big disappointment in my book with the cast that this film had. My Rating; Bargain Matinee     After the Wedding Website

Indiefest: The Peanut Butter Falcon (2019) PG-13 Zak (Zack Gottsagen), a young man with Downs syndrome runs away from his care home to pursue his dream of becoming a professional wrestler. On the road, he encounters Tyler (Shia LaBeouf) a small-time outlaw that’s on the run that becomes an unlikely coach. They also convince Eleanor (Dakota Johnson), a nursing home worker to join their quest. I’m not a big fan of Shia LeBeouf or Dakota Johnson but both giving wonderful and winning performances in this warm and beautiful film about finding a group of people that can become your family. As good as the two leads are, it’s Zack Gottsagen who steals the movie as the young man who is determined to travel a great distance, so he can attend his hero’s (Thomas Hayden Church) wrestling school. I can’t recommend this film more; it is brilliantly scripted and the performances are real and you can see the love on the screen. This is the feel-good film of the summer. You will enjoy every minute of this film.   My Rating: I Would Pay to See it Again    The Peanut Butter Falcon Website

Indiefest: Cold Case Hammarskjold (2019)   Documentary about Danish director Mad Brugger and Swedish private investigator Gorna Bjorkdahl trying to solve the mysterious death of Dag Hammarskjold who at the time was the Secretary-General of the United Nations. The film tries to determine if the plane of controversial Secretary-General died in an accidental plane crash or was he murdered. The problem the two investigators have is that the crash took place over 50 years ago and therefore, a lot of the suspects are dead. Some that are alive won’t talk or don’t remember the accident. Furthermore, hurting the two investigators is the fact that they cannot excavate the site of where the plane is buried. The film is interestingly put together as the director Brugger sits in a hotel room and dictates the ideas of the film to two different secretaries (to get their separate opinions on things). It is still a mystery by the end of the film but there is plenty of evidence to make up your own mind on if Hammarskjold was assassinated.    My Rating: Full Price    Cold Case Hammarskjold Website

Forgotten Film: Warrior (2011)  PG-13  Two brothers, who are struggling to survive in today’s world, meet in the finals of a mixed martial arts tournament. The youngest brother (Tom Hardy) is fighting to escape the demons of his past; the older brother (Joel Edgerton) is fighting for the survival of his marriage and family. But one brother has an edge over the other, as his trainer is their father(Nick Nolte). What I love about this movie is that it asks you to root for one of the two brothers but both are fighting the good fight and you want both to come out winners. I also like the contrast between the two brothers: Hardy’s character is full of rage, Edgerton’s is the family man who is forced to fight for his family.  My Rating: Full Price    Warrior Info

Weird Credits: From the credits of The Peanut Butter Falcon: Sticher

Coming Soon to a Theatre Near You: Judy (2019)  PG-13  A penniless and most considered washed up Judy Garland (Renee Zellweger) arrives in London to restart her career with a series of sold-out concerts. Looking at the trailer, this could be a tour-de-force performance by Zellweger and maybe an Oscar for her.     Judy Info 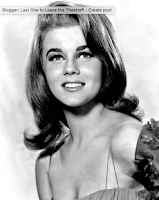